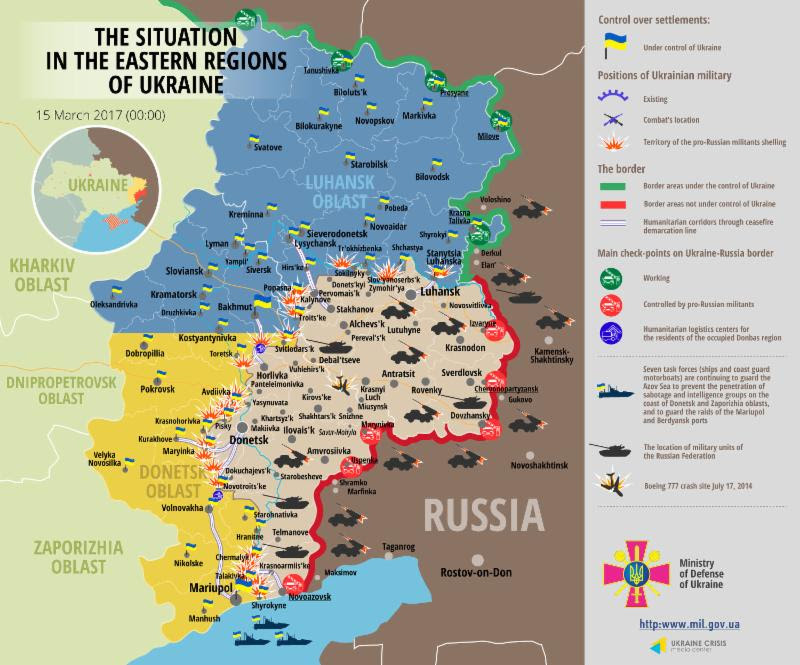 2. Ukraine suspends cargo traffic with Russian-occupied territories in Donetsk, Luhansk oblasts
The National Defense and Security Council of Ukraine (RNBO) suspended cargo traffic with the Russian-occupied territories of Donetsk and Luhansk oblasts. RNBO Secretary Oleksandr Turchynov stated, “Acknowledging the sharp escalation of Russia’s aggression against Ukraine, the forcible seizure of Ukrainian enterprises located in certain areas of Donetsk and Luhansk regions, realizing the aggravation of threats to economic and energy security of Ukraine triggered by deliberate actions of terrorists, and given the fact that Russia has started to recognize the ‘documents’ of self-proclaimed republics at the state level, with a view to protecting the rights and freedoms of Ukrainian citizens and to ensure national security of Ukraine, the [RNBO] decided: to temporarily stop the cargo movement along the delimitation line, [until] paragraphs 1-2 of the Package of Measures for the Implementation of the Minsk Agreements as of February 12, 2015 are implemented, and [until] the seized enterprises are returned under Ukrainian jurisdiction. […] The Ministry of Internal Affairs of Ukraine, the National Police of Ukraine, the National Guard of Ukraine with the participation the Security Service of Ukraine were assigned to immediately stop the cargo movement along the delimitation line by rail and by road.”
3. Ukraine’s Acting Minister of Health discusses procurement of medicine through international organizations
On March 14, Ukraine’s acting Minister of Health Ulana Suprun and international partners held a discussion on “Procurement of Medicine through International Organizations: Analysis of the First Year, and the start of the 2017 Procurement process.” International organizations – UNDP, UNICEF, and Crown Agents company, completed deliveries for funds allocated for procurement for 2015. Suprun stated, “The procurement experience for 2015 clearly shows that this was the most effective anti-corruption reform in health care. We were able to expand the geography of participants, procure more than 60% of the necessary medicine directly from manufacturers. And most importantly – through procurements in international markets – obtain high-quality medicine that was previously not available in Ukraine. The success of 2015 confirm that the reform of procurement is effective, and needs to be continued. […] From the moment of the arrival of our team at the Ministry, we undertook two parallel processes: unblocking procurement from 2015 funds, and beginning procurement for 2016 funds. We were able to do in three months what the Ministry couldn’t do in the previous nine months. This was an important experience, through which we have identified many opportunities for improving the procurement process. That’s why this year we’ve begun much earlier with specific plans on how to start and complete the planned procurements this year,” the Ministry of Health reported.
0 Likes