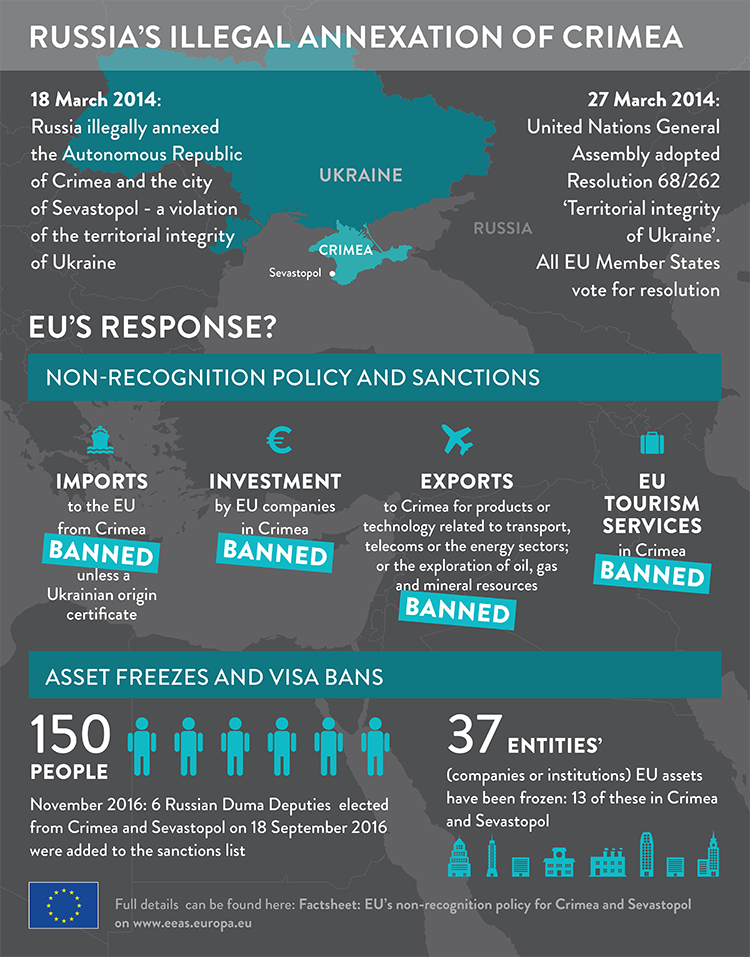 4. EU remains fully committed to Ukraine’s sovereignty and territorial integrity
On March 17, EU High Representative for Foreign Affairs Federica Mogherini stated, “Three years on from the illegal annexation of the Autonomous Republic of Crimea and the city of Sevastopol by the Russian Federation, the European Union remains firmly committed to Ukraine’s sovereignty and territorial integrity.  The European Union reiterates that it does not recognise and continues to condemn this violation of international law. It remains a direct challenge to international security, with grave implications for the international legal order that protects the unity and sovereignty of all States. The European Union remains committed to fully implementing its non-recognition policy, including through restrictive measures. […]Over the past year, the ongoing militarisation of the peninsula has continued to impact the security situation in the Black Sea region and the human rights situation in the Crimean peninsula has deteriorated further. The rights of the Crimean Tatars have been gravely violated through the shutting down of Crimean Tatar media outlets, the banning of the activities of the Mejlis, their self-governing body, and the persecution of its leaders. Lawyers such as Emil Kurbedinov and Mykola Polozov, defending the rights of Crimean Tatars and of those who do not recognise the illegal annexation of the peninsula, were themselves presented with criminal charges. In this regard, we call for the release of the First Deputy Chairman Akhtem Chiygoz and for the charges against Deputy Chairman Ilmi Umerov to be dropped, and the right to legal counsel to be fully respected. Furthermore, the EU reiterates its call for the immediate release of Oleh Sentsov, Oleksandr Kolchenko and all those who have been detained and sentenced in breach of international law.”
0 Likes