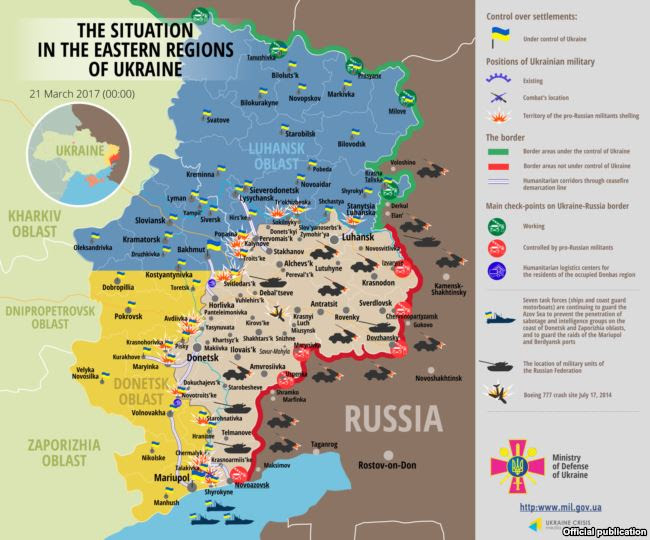 2. Canada’s House of Commons holds take-note debate on extension of Operation UNIFIER
On March 20, Canada’s Members of Parliament held a take-note debate on the extension of Operation UNIFIER, Canada’s military training mission in Ukraine. On March 6, the Government of Canada extended Operation UNIFIER until the end of March, 2019. A full transcript of the debate can be accessed at http://www.parl.gc.ca/HousePublications/Publication.aspx?Pub=hansard&Language=E&Mode=1&Parl=42&Ses=1
3. Canada’s Ambassador to Ukraine interview on Canada-Ukraine partnership
Canada’s Ambassador to Ukraine Roman Waschuk gave an interview to Hromadske TV on March 19. Waschuk spoke about the Canada-Ukraine Free Trade Agreement, foreign policy, and Canada’s support for Ukraine on a range of issues. The interview can be viewed here:
4. FBI Director confirms investigation of possible coordination between Russia, Trump campaign
The Washington Post reported on March 20, FBI Director James B. Comey acknowledged Monday that his agency is conducting an investigation into possible coordination between the Kremlin and the Trump campaign in a counterintelligence probe that could reach all the way to the White House and may last for months. The extraordinary disclosure came near the beginning of a sprawling, 5½ -hour public hearing before the House Intelligence Committee […] The FBI traditionally does not disclose the existence of an investigation, ‘but in unusual circumstances, where it is in the public interest,’ Comey said, ‘it may be appropriate to do so.’Comey also said he was authorized by the Justice Department to confirm the existence of the wide-ranging probe into Russian interference in the electoral process. […]Comey and [National Security Agency Director Michael S.] Rogers both predicted that Russian intelligence agencies will continue to seek to meddle in U.S. political campaigns, because they consider their work in the 2016 presidential race to have been successful. In an influence campaign that the U.S. intelligence community in January said was ordered by Russian President Vladimir Putin, hackers working for Russian spy agencies penetrated the computers of the Democratic National Committee in 2015 and 2016, as well as the email accounts of Democratic officials. The material was relayed to WikiLeaks, the intelligence community reported, and the anti-secrecy group launched a series of damaging email releases that began just before the Democratic National Convention last summer and continued through the fall. The Russians’ goal was not only to undermine the legitimacy of the election process but also to harm Clinton’s campaign and boost Trump’s chances of winning, the intelligence community concluded. ‘They’ll be back in 2020. They may be back in 2018,’ Comey said. ‘One of the lessons they may draw from this is that they were successful, introducing chaos and discord’ into the electoral process. Rogers agreed: ‘I fully expect they will maintain this level of activity.’ And, he said, Moscow is conducting a similar ‘active measures’ campaign in Europe, where France and Germany are holding elections this year.”
0 Likes