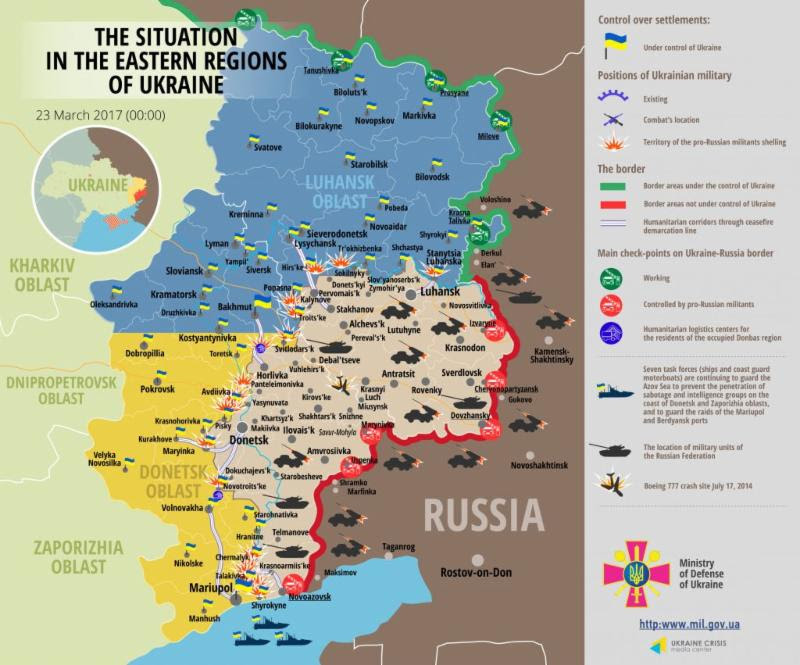 2. Explosion at arms depot prompts evacuation; Ukrainian officials investigating sabotage
The BBC reported, “Some 20,000 people are being evacuated after a series of explosions at a massive arms depot in eastern Ukraine described by officials as sabotage. The base in Balakliya, near Kharkiv, is around 100km (60 miles) from fighting against Russian-backed separatists. The dump is used to store thousands of tonnes of ammunition including missiles and artillery weapons. Rescue teams are overseeing a huge evacuation effort for people living in the city and nearby villages. The total area of the dump spans more than 350 hectares, the military says. Everyone within a 10km (6 miles) radius of the dump is being evacuated, the Interfax news agency quoted an aide to President Petro Poroshenko as saying. […]The authorities are investigating various ways the explosions may have been caused, Defence Minister Stepan Poltorak said, including the possibility of an explosive device being dropped from a drone.A drone was reported to have been used an earlier attempt to set the facility on fire in December 2015. Mr Poltorak said that there were no reports that civilians or serviceman had been killed or injured in the latest incident and that airspace had been closed within a 50km (31 miles) radius of Balakliya.”
3. Ukraine’s President: Murder of former Russian lawmaker is act of state terrorism by Russia
Former Russian Duma member Denys Voronenkov, who fled Russia to Ukraine and was one of the witnesses in Ukraine’s investigation of former President Viktor Yanukovych, was shot and killed in Kyiv today. Ukraine’s President Petro Poroshenko stated, “Insidious murder of Denys Voronenkov in the center of Kyiv is an act of state terrorism by Russia, which he had to flee for political reasons. It is an obvious handwriting of Russian special services that has been repeatedly demonstrated in various European capitals […]Voronenkov was one of the main witnesses of Russian military aggression against Ukraine, particularly of the role of Yanukovych in sending Russian troops to our country. I believe it is not a coincidence that the murder took place on the same day with the sabotage in Balakliia, Kharkiv region.”
4. USA on Russia’s ongoing violations of international law and defiance of OSCE principles
Speaking at the OSCE Permanent Council, US Charge d’Affaires Kate M. Byrnes stated, “Russian aggression in eastern Ukraine continues to cost lives every day. More than a million people remain displaced by fighting. The humanitarian crisis has worsened, as shelling periodically cuts off water and power to people living in the Donbas. […] In Crimea, Russia continues to silence civil society and independent media. Members of minorities, especially Crimean Tatars and ethnic Ukrainians, and those who oppose the occupation, continue to face harassment and political prosecution. The UN Human Rights Monitoring Mission’s latest report states that occupation authorities ‘extract confessions through torture and ill-treatment’ and employ punitive psychiatric treatment against members of these groups. The show trial against independent journalist Mykola Semena is an example of the lengths to which Russia will go to stifle those who speak out against its occupation of Crimea and the repression of the ability of individuals to exercise their rights. We appeal once again for Russia to drop all charges and release Mr. Semena, and all other Ukrainians held by Russia for political reasons. The United States affirms its staunch support for Ukraine’s sovereignty, independence, and territorial integrity within its internationally-recognized borders. Crimea-related sanctions on Russia will remain in place until Russia returns full control of the peninsula to Ukraine. We join our European and other partners in restating that our sanctions against Russia for its aggression in eastern Ukraine will remain until Russia fully implements its commitments in the Minsk agreements. Russia’s actions in Ukraine are in contravention of international law, the Helsinki Final Act, and Russia’s ensuing OSCE commitments.”
0 Likes