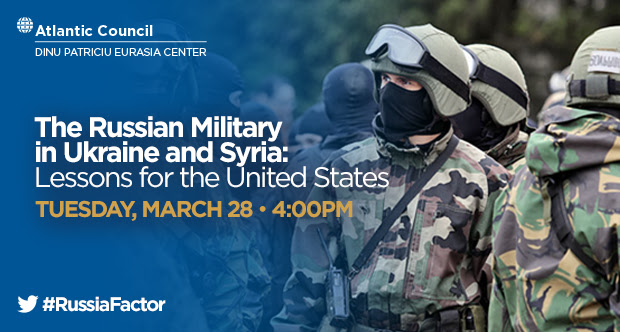 This event will be streamed live today, 4 PM Eastern time at
http://www.atlanticcouncil.org/events/upcoming-events/detail/the-russian-military-in-ukraine-and-syria-lessons-for-the-united-states

The General Staff of Ukraine’s Armed Forces reported that in the last 24 hours, two Ukrainian soldiers were killed and five Ukrainian soldiers were wounded in action. Towards Donetsk, Russian-terrorist forces shelled Ukrainian positions near Avdiivka and Svitlodarsk with mortars and tanks. Towards Mariupol, Russian-terrorist forces carried out heavy mortar shelling of Ukrainian positions at Maryinka, Krasnohorivka, Pavlopil and Hnutove. Towards Luhansk, Russian-terrorist forces shelled Ukrainian positions at Popasne with mortars and artillery.
2. Top EU Court Upholds Sanctions Against Rosneft
Radio Free Europe/Radio Liberty reported, “The top European Union court has ruled that EU sanctions imposed on Russian energy giant Rosneft over Moscow’s seizure of Crimea and involvement in the conflict in eastern Ukraine are lawful. The European Court of Justice (ECJ) said in a statement on March 28 that ‘restrictive measures…in response to the crisis in Ukraine against certain Russian undertakings, including Rosneft, are valid.’ […] The court said in its ruling that the EU’s hindering of state-controlled Rosneft’s ability to conduct business was in proportion to the level of economic sanctions placed on Russia. […] Rosneft is headed by Igor Sechin, a close ally of Russian President Vladimir Putin.”
3. Supreme Allied Commander Europe: We need to consider lethal defensive weapons for Ukraine
US General Curtis Scaparrotti, Commander US European Command and Supreme Allied Commander Europe testified at the US House of Representatives Armed Services Committee today. General Scaparrotti stated, “The Ukrainian Forces are learning. And they’re getting better. […] In terms of weaponry, I personally believe that we need to consider lethal defensive weapons for Ukraine. They’re fighting a very lethal, tough enemy, it’s a Russian proxy, really, and the Russians provide some of their newest equipment there. […] So we need to continue to support [Ukraine], in my view, to have the appropriate weapons to defend Ukraine.”
4. Ukraine’s President meets with G7 Ambassadors
Ukraine’s President Petro Poroshenko met with the Ambassadors of the G7 (Canada, France, Germany, Italy, Japan, UK, USA) and the EU on March 27. The President’s press service reported, “The Head of State highly appreciated solidarity and unity of the G7 countries with Ukraine in ensuring support for the implementation of internal reforms and counteraction to the Russian aggression. Special attention was paid to the escalation of the situation in Donbas given recent destructive actions of Russia in the territory of certain districts of Donetsk and Luhansk regions that undermine the peace process and further implementation of the Minsk agreements. In this context, the parties agreed to continue pressure on the Russian authorities to return the situation in the framework of the Minsk agreements, inter alia, through the preservation and, if necessary, enhancement of the international sanctions against Russia. The parties discussed the decision of the National Security and Defense Council of Ukraine regarding the temporary suspension of the transportation of goods between Ukraine and the uncontrolled territories of Donetsk and Luhansk regions. The Ambassadors understand the necessity of such steps given the illegal expropriation of the Ukrainian property and irresponsible actions of certain political forces on unauthorized and thoughtless so-called blockade of railways in Donbas. The parties underlined the need for preventing the deterioration of the humanitarian situation on both sides of the delimitation line and agreed to take joint measures to minimize negative impact on civilians from the restrictions on the movement of goods. The Head of State informed the international partners on the progress and prospects in the implementation of the program of internal transformations, particularly in the sphere of anti-corruption policy, judicial reform, decentralization, deregulation, energy, healthcare and creation of attractive investment climate. The parties coordinated future ways to provide comprehensive assistance to Ukraine by the G7 and the European Union in the implementation of reforms.”