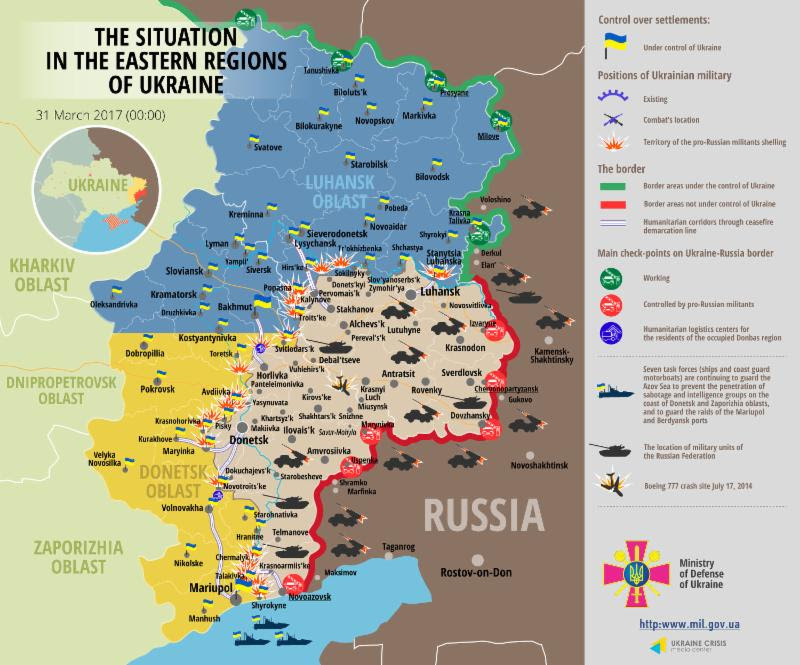 2. Ukraine’s President instructs Ukrainian armed forces to cease fire on April 1
Ukraine’s President Petro Poroshenko stated on March 30, “Pursuant to my instruction, our delegation in Minsk offered to declare ceasefire on the eve of Easter. Unfortunately, we do not have great optimism that the other side will comply with the agreements, but life and health of every Ukrainian warrior is the most precious value. […] We will see how these agreements will be fulfilled starting from April 1. […] This once again refutes Russian statement that the Ukrainian party is not willing to achieve peace. On the contrary, we have been not only consistently declaring, but also proving for three years that the Ukrainian party stands for ensuring the ceasefire regime, withdrawal of Russian troops, restoration of control over the uncontrolled part of the Ukraine-Russia border and return of Ukrainian sovereignty to the occupied Donbas and Crimea,” the President’s press service reported.
3. NATO-Ukraine Commission meets at NATO Foreign Ministers meeting
The NATO-Ukraine Commission met at the NATO Foreign Ministers meeting in Brussels today. Opening the meeting, NATO Secretary General Jens Stoltenberg stated, “We are meeting today to reaffirm NATO’s solidarity with Ukraine. As the country’s sovereignty and territorial integrity continue to be violated by Russia’s aggressive actions. NATO Allies speak with one voice:  we do not – and we will not – recognise Russia’s illegal annexation of Crimea. And we are concerned about the limited progress in implementing the Minsk agreements, to achieve a peaceful settlement in eastern Ukraine. In fact, since our last meeting in December, the security situation has worsened. We will discuss the way forward. We will also assess Ukraine’s reform process and we will restate NATO’s political and practical support.”