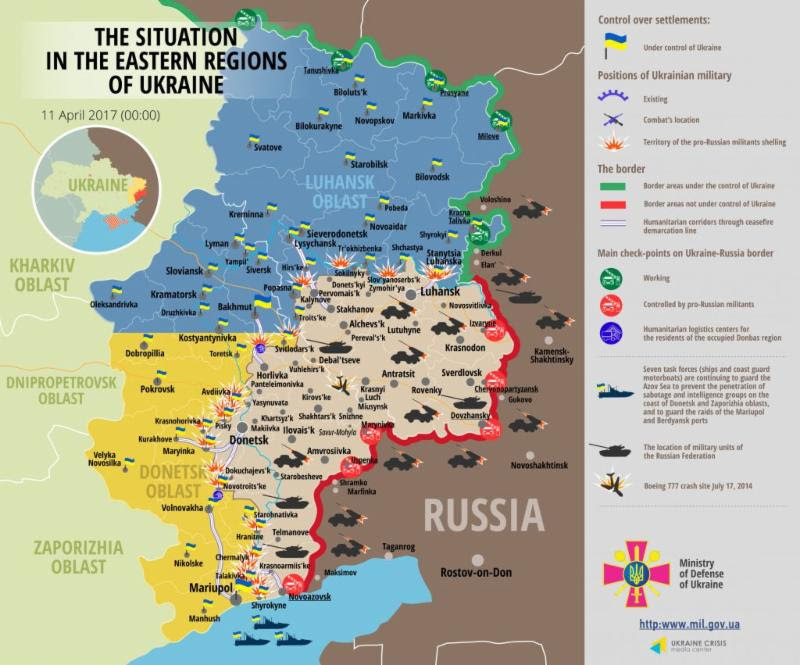 2. International Court of Justice to deliver decision in Ukraine v. Russia on April 19
The International Court of Justice (ICJ) stated on April 10, “On Wednesday 19 April 2017, the International Court of Justice (ICJ), the principal judicial organ of the United Nations, will deliver its Order on the request for the indication of provisional measures submitted by Ukraine in the case concerning Application of the International Convention for the Suppression of the Financing of Terrorism and of the International Convention on the Elimination of All Forms of Racial Discrimination (Ukraine v. Russian Federation). A public sitting will take place at 3 p.m. at the Peace Palace in The Hague, during which Judge Ronny Abraham, President of the Court, will read the Court’s Decision.”
3. Human Rights Group: Russia breaches international law forcing Crimeans to serve in occupying army
The Kharkiv Human Rights Protection Group (KHPG) reported, “Nearly 5 thousand young Crimeans are to be conscripted into Russia’s army in 2017, with Russia thus openly flouting the UN General Assembly and the Fourth Geneva Convention.  For the first time since Russia invaded and annexed Crimea, Crimeans will be sent to regions of the Russian Federation.  Criminal liability and other measures have also been increased since April 1 against those unwilling to do such ‘military service’. […] The Crimean Human Rights Group has long warned that any conscription of Crimeans breaches international humanitarian law, and specifically the Geneva Convention relative to the Protection of Civilian Persons in Time of War. Article 51 of this Convention states unequivocally that ‘The Occupying Power may not compel protected persons to serve in its armed or auxiliary forces. No pressure or propaganda which aims at securing voluntary enlistment is permitted.’ Article 49 prohibits ‘individual or mass forcible transfers, as well as deportations of protected persons from occupied territory to the territory of the Occupying Power or to that of any other country, occupied or not.’  This, of course, applies also to Russia’s continuing imprisonment in Russia of Ukrainian political prisoners and its ‘deportation’ of Crimean Tatars. Russia’s denial that it is occupying Crimea has been rejected by the entire democratic world.  The Chief Prosecutor of the International Criminal Court issued a preliminary report on Nov 16, 2016, which found that the situation with Crimea constitutes an international armed conflict between Ukraine and the Russian Federation.  Russia’s immediate attempt to reject the jurisdiction of the Court in the Hague is legally meaningless, given that this is an international conflict and Ukraine has recognized the Court’s jurisdiction.” The full report from KHPG is available at http://khpg.org/en/index.php?id=1491741696
4. IRI releases Ukraine nationwide municipal survey
On April 10, the International Republican Institute (IRI) released its third annual nationwide municipal survey, of more than 19,000 respondents from 24 cities across Ukraine, including Mariupol and Severodonetsk. IRI Regional Director for Eurasia Stephen Nix stated, “IRI’s polling data shows clear improvements in the quality of public service delivery and good governance at the local level. While incremental progress has been made at the national level, the research shows that the most noticeable breakthroughs since Ukraine’s Revolution of Dignity in 2014 have occurred locally. These improvements underscore one of the basic principles of IRI’s work: that grassroots engagement is the foundation of a robust, participatory democracy.” IRI reported, “Despite this discernible progress at the local level, attitudes as a whole remain pessimistic. The data suggests that the economic crisis is still acutely felt in Ukrainian households. In all but two cities surveyed, the percentage of respondents who believe that Ukraine is headed in the right direction has decreased over the last three years. However, it is important to note that Ukrainian cities continue to show strong support for the country’s path towards European integration: in all but one city, a majority or plurality supports Ukraine’s accession into the European Union.” The survey was conducted by Rating Group Ukraine and funded by the Government of Canada. The full survey is available at http://www.iri.org/resource/ukraine-poll-local-outlook-improves-national-pessimism-remains-high
0 Likes