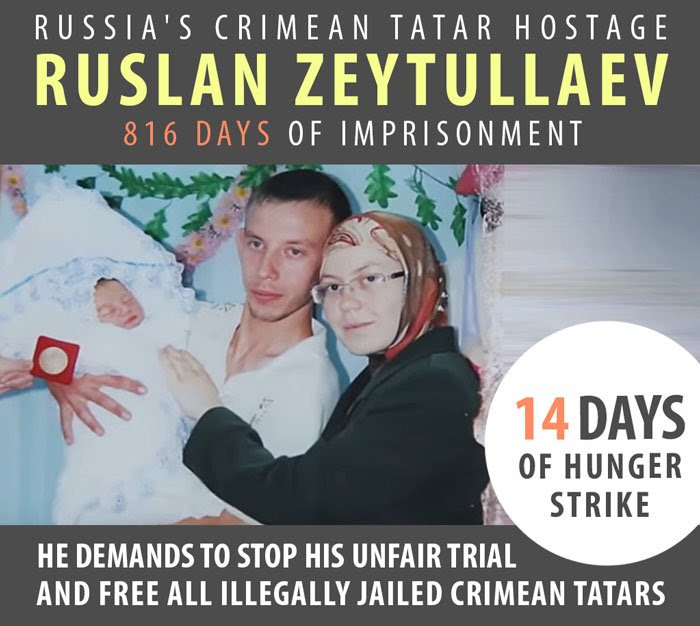 2. Ukrainian Human Rights Organizations appeal to international community on case of Ruslan Zeytullaev, illegally imprisoned by Russia
Several Ukrainian human rights NGOs, led by the Ukrainian Helsinki Human Rights Union, stated, “Ruslan Zeytullaev is a defendant within the so-called case of Crimean Muslims of ‘Hizb-ut Tahrir’. He was detained in occupied Crimea in January 2015 together with three other Crimean Tatars – Ferat Sayfullaev, Nuri Primov, and Rustem Vaitov. Ruslan was accused of organizing a terrorist organization […]. In violation of international humanitarian law, Russia forcibly transferred the four from the Crimea to Rostov-on-Don, where they were convicted by the North Caucasus district military court last year to 5 and 7 years in prison. To date, at least 19 Crimean Muslims are persecuted by the Russian Federation for political reasons within so-called ‘Hizb-ut Tahrir’ case. After the Russian occupation of Crimea in 2014, the criminal prosecution of persons who neither engaged in nor plan to carry out any acts of violence on terrorism charges is used as an additional instrument of pressure on the indigenous population of Crimea, who are deprived of the right to freedom of religion. Russia’s Memorial Human Rights Center recognized Ruslan Zeytullaev along with the other defendants of the case as political prisoners, as did Ukraine’s MFA. Ruslan was also mentioned among other illegally detained persons in the European Parliament resolution ‘Ukrainian political prisoners in Russia and situation in Crimea’ 2017/2596 (RSP), adopted on 16 March 2017. According to the decision of the Appellate court, Ruslan’s case is now being reviewed by the North Caucasus district military court of Rostov-on-Don. Ruslan faces 15 years in prison. On 4 April 2017, at one of the court hearings Ruslan declared a hunger strike. He put forward three demands: 1) Crimea’s occupation authorities stop the persecution of Crimean Tatars, 2) Ukrainian consuls be allowed access to him, 3) he and other Crimean Muslims illegally held by Russia be transferred to Ukraine. The hunger strike continues for two weeks already. None of his requirements were met. Despite systematic requests of representatives of the Consulate General of Ukraine in Rostov-on-Don to visit Zeytullaev, Russia denies him the right to meet the Ukrainian consul. According to his lawyer Emil Kurbedinov, as of April 14, Ruslan has lost more than 6 kg of weight. During the trial lawyer even had to call an ambulance for his client. In addition, after Ruslan declared the hunger strike, the Russian Penitentiary Service’s attitude towards him significantly worsened. […]We appeal to the international community and the Ukrainian authorities with a number of requests and hope for your support. To the European Union and its delegation, and the representations of Western states in the Russian Federation: 1. Ensure trial monitoring of the case of Zeytullaev, as well as visit Ruslan when possible […] 2. Ensure the involvement of independent doctors to diagnose the state of health of Zeytullaev, and to possibly place him in an independent health facility; 3. Issue a statement requesting an independent medical examination and hospitalization of Ruslan Zeytullaev, as well as the satisfaction of the prisoner’s demands, especially concerning free access to the Ukrainian consuls and transfer of the political prisoners to Ukraine, and condemn the Russian Federation’s practice of illegal persecution of Crimean Tatars on religious grounds.” The full appeal is available at https://helsinki.org.ua/en/appeals/appeal-of-ngos-with-regards-to-hunger-strike-of-the-prisoner-of-kremlin-ruslan-zeytullaev/
3. Magnitsky Law tabled in Canada’s House of Commons
On April 13, Bill S-226 “Justice for Victims of Corrupt Foreign Officials Act (Sergei Magnitsky Law)” was tabled in the House of Commons by James Bezan (MP, Selkirk-Interlake-Eastman). Canada’s Senate adopted S-226, introduced by Senator Raynell Andreychuk, on April 11. The Magnitsky Law provides “for the taking of restrictive measures in respect of foreign nationals responsible for gross violations of internationally recognized human rights. It also proposes related amendments to the Special Economic Measures Act and to the Immigration and Refugee Protection Act.” James Bezan stated, “We must work in concert with our allies to ensure that there are mechanisms in place in to sanction individuals who are responsible for, or complicit in, gross violations of internationally recognized human rights and are abusing their positions of authority.”
0 Likes