Ukraine: Daily Briefing
April 20, 2017, 5 PM Kyiv time
1. Russian Invasion of Ukraine
The General Staff of Ukraine’s Armed Forces reported at 12:30 PM Kyiv time that in the last 24 hours, no Ukrainian soldiers were killed and one Ukrainian soldier was wounded in action. Towards Donetsk, Russian-terrorist forces fired on Ukrainian positions at Avdiivka, Kamyanka and several other locations on the Donetsk sector of the front. Towards Mariupol, Russian-terrorist forces shelled Ukrainian positions at Krasnohorivka with mortars. Russian-terrorist forces fired on Ukrainian positions on the Pavlopil-Shyrokyne line. Towards Luhansk, Russian-terrorist forces fired on Ukrainian positions at Krymske.
2. UN Court at the Hague orders Russia to stop persecuting Crimean Tatar Mejlis
The Kharkiv Human Rights Protection Group (KHPG) reported, “The International Court of Justice’s decision on April 19 concerning Ukraine’s suit against Russia may have rejected one request for provisional measures, but its intercession on behalf of Crimean Tatars and other Ukrainians facing persecution in occupied Crimea and its recognition of jurisdiction on both claims made this an important victory for Ukraine.  As one Ukrainian official put it, this was 3:1 in Ukraine’s favour.  Optimism is not high among victims of discrimination under Russian occupation regarding practical implementation of the provisional measures, but it is undoubtedly important that the Court recognized the repression and the urgent need for preventive measures now. Russia had hoped to persuade the UN Court to throw the case out as being outside its jurisdiction.  Over both issues, however, the Court found prima facie jurisdiction.  The Court agreed to impose provisional measures over the banning in occupied Crimea of the Crimean Tatar Mejlis, or self-governing body, and restrictions on education in the Ukrainian language.  It rejected Ukraine’s request for provisional measures to stop Russia financing militants in Donbas, stating that Ukraine had not as yet provided sufficient proof. The Court instead stressed the importance of full implementation of the Minsk Accords. […]Ukraine initially lodged its suit against Russia in January, with preliminary hearings held from March 6-9.  In order to fall within the Court’s jurisdiction, Ukraine needed to find violations of UN conventions binding on both countries.  In a 45-page document, Ukraine accused Russia of violating the International Convention for the Suppression of the Financing of Terrorism and the International Convention on the Elimination of All Forms of Racial Discrimination.   The first hurdle, as mentioned, was jurisdiction, and it was clear from the outset that Russia was hoping to persuade the Court, as it had in 2011 over the war between Georgia and Russia that it could not examine the case at all.   For the moment, it has failed in this. […]There were several reasons why Dmytro Kuleba, Ukraine’s Representative at the Council of Europe, was not alone in fearing that the Court would say it had no jurisdiction over the claim that Russia is financing terrorism through its arming, manning and funding of the militants in Donbas.  Kuleba had suspected that the Court might not want to open a Pandora’s Box.  In addition, while Russia’s claim that the weapons in Donbas had been ‘found’ in mines was manifestly absurd, proving the direct financing of the armed fighters and provision of weapons is more difficult.  There is also the issue of the definition of terrorism and financing of terrorism in the relevant Convention.  Ukraine needed to provide sufficient evidence of intention and knowledge, as well as the element of purpose (to kill or terrorize civilians). The Court found that it had not yet done so, and refused to impose provisional measures, but did not reject the claim itself. […] Court hearings on the merits of this case could continue for a few years.  They will be taking place which is already something of a victory.  If Russia continues its ban on the Mejlis and persecution of its members, it will be in direct breach of the UN International Court of Justice whose jurisdiction it recognizes.”  The full report from KHPG is available at http://khpg.org/en/index.php?id=1492636628
3. Ukraine’s President meets with UK PM in London
Ukraine’s President Petro Poroshenko met with UK Prime Minister Theresa May in London on April 19. A Downing Street spokesperson stated, “The Prime Minister hosted President Poroshenko of Ukraine at Downing Street this afternoon for their first bilateral meeting. They began by welcoming the strength of bilateral relations as we mark 25 years of diplomatic ties, and committed to working together to deepen our relationship in the years ahead. The Prime Minister was clear that the UK recognises the threat posed by Russia through the illegal annexation of Crimea and the ongoing conflict in Eastern Ukraine, and noted that the UK continues to offer support to counter this threat. They agreed on the importance of maintaining sanctions until the Minsk agreement is fully implemented, and of looking at how we work together to enhance our bilateral security and defence co-operation. They also discussed Ukraine’s reform agenda, and the Prime Minister welcomed the progress that has been made so far. She confirmed that the UK government looks forward to holding a reform conference on 6 July, to maintain momentum and galvanise international support for Ukraine’s efforts.” 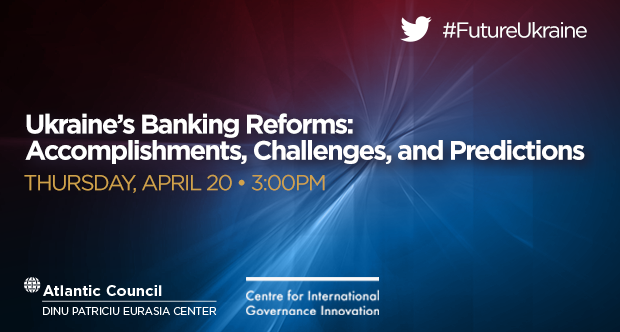 This event will be live-streamed at 3PM Eastern time today at
http://www.atlanticcouncil.org/events/upcoming-events/detail/ukraines-banking-reforms-accomplishments-challenges-and-predictions
0 Likes