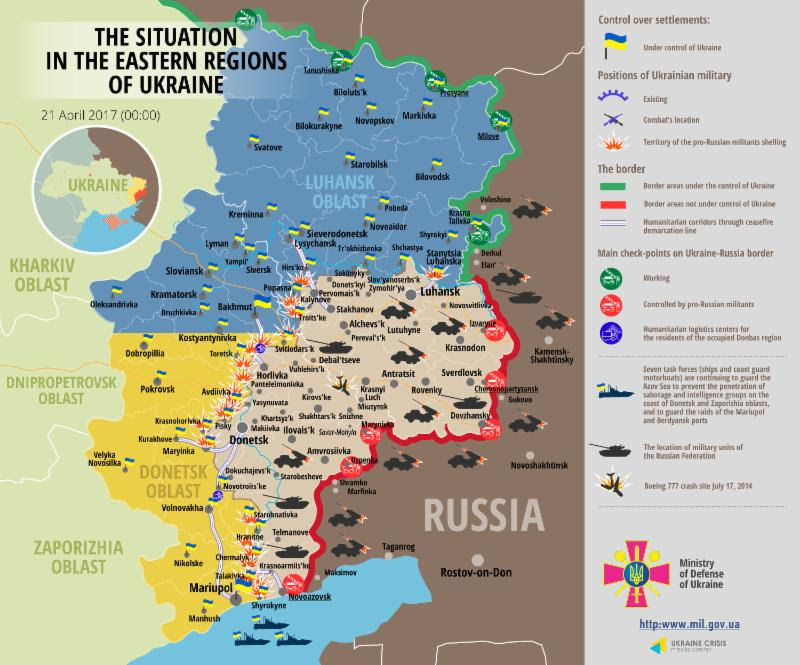 2. Prominent Ukrainian politician detained in corruption investigation
Radio Free Europe/Radio Liberty (RFE/RL) reported, “Ukrainian investigators are seeking a court order to place an influential former lawmaker who is suspected of embezzlement in pretrial custody. Mykola Martynenko was detained in Kyiv late on April 20 after the National Anticorruption Bureau (NABU) announced it was preparing to file charges against him. Special anticorruption prosecutor Nazar Kholodnytskiy said on April 21 that prosecutors would seek a custody decision from a Kyiv court later in the day. Martynenko is the second prominent political figure to have been detained in less than three months in Ukraine, whose government has faced pressure from its own citizens, Western governments, and the IMF to crack down on corruption. An ally of former Prime Minister Arseniy Yatsenyuk and former chairman of parliament’s fuel and energy committee, Martynenko is suspected of embezzling $17.3 million in a scheme involving a state company that provides uranium for nuclear power plants. […] Ukrainian tax and customs service chief, Roman Nasirov, was detained in early March in another case seen as a test of the government’s commitment to fighting corruption.”
3. Russian FSB resorts to flagrant falsification to jail Ukrainian activist in Russian-occupied Crimea
The Kharkiv Human Rights Protection Group (KHPG) reported, “Well-known Russian lawyer Dmitry Dinze has warned a Crimean court that even under Russian legislation it faces criminal liability for imprisoning people on the basis of overtly rigged evidence.  The warning was issued with good cause shortly after Dinze took up the defence of Volodymyr Balukh, a Ukrainian activist in Russian-occupied Crimea arrested days after he hung up a plaque honouring the slain victims of Maidan.  Dinze earlier acknowledged, when representing Ukrainian filmmaker Oleg Sentsov, that the defence has very limited scope in Russia’s politically-motivated prosecutions of Ukrainians.  It can, nonetheless, help to highlight the flagrant violations of their clients’ rights, and there are certainly multiple infringements in this new ineptly fabricated case. Balukh was arrested on Dec 8, 2016 after 90 bullets and several trotyl explosive devices were allegedly ‘found’ in his attic.  He had no record of violence and the constant searches and harassment he had faced since Russia’s invasion of Crimea for his openly pro-Ukrainian position made it inconceivable that he could have held anything illegal in his home.  This was one of the reasons why the Memorial Human Rights Centre needed little time to declare the 46-year-old Crimean farmer a political prisoner.  […] Olha Skrypnyk, Coordinator of the Crimean Human Rights Group, notes that there were overt falsifications from the outset.  The search was called an ‘inspection’, and carried out with gross infringements.  Balukh was locked in a room to keep him out of the way, as was his wife.  She confirmed at the first hearing on March 16 that no less than 16 people had taken part in the search, and had wandered around their home without either her or her husband. […] Dinze and Balukh’s Crimean lawyer Taras Omelchenko have set out all these falsifications on 10 pages.  They presented them on April 7 as clear grounds for releasing Balukh from custody. Dinze reminded the court that it is a criminal offence to knowingly use falsified evidence in order to deprive somebody of their liberty. […] Balukh is now facing a sentence of up to 4 years’ imprisonment.  He is one of the prisoners whose release the European Parliament demanded in their March 16 resolution.” The full report from KHPG is available at http://khpg.org/en/index.php?id=1491611517
4. European Parliament, Verkhovna Rada extend partnership
The European Parliament and Ukraine’s Verkhovna Rada confirmed the extension of a Memorandum of Understanding between the two parliaments on cooperation and capacity building. European Parliament stated, “The MoU provides the political framework for the democracy support activities with Ukraine and specifically with the Verkhovna Rada.” Elmar Brok, lead MEP on democracy support activities for Ukraine, stated, “I am here on behalf of President Tajani to extend the Memorandum of Understanding, to confirm to you once more that Ukraine is a high priority for the European Parliament […]What you achieve here in the Verkhovna Rada is vital for the democratic future of Ukraine and represents an important symbol of hope for the whole region.”
0 Likes