2. OSCE monitor killed in Russian-occupied Luhansk region
The Organization for Security and Cooperation in Europe (OSCE) stated on April 23, “A paramedic who was part of a patrol of the OSCE Special Monitoring Mission to Ukraine (SMM) died and two SMM monitors were taken to hospital today after their vehicle was heavily damaged by an explosion near Pryshyb in the non-government controlled Luhansk region. Austrian Foreign Minister and OSCE Chairperson-in-Office Sebastian Kurz and OSCE Secretary General Lamberto Zannier both extend their most heartfelt condolences to the family and relatives of the individual who died as well as to the SMM team as a whole. They also express solidarity with the monitors who were injured and wish them a speedy recovery.”
3. Ministry of Foreign Affairs of Ukraine statement on death of OSCE monitor in Russian-occupied Luhansk region
Ukraine’s Ministry of Foreign Affairs stated, “”The news of the April 23 death of one and injury of several observers from the OSCE’s Special Monitoring Mission (SMM) in the territory temporarily occupied by the Russian Federation in certain areas of the Donetsk and Luhansk regions was met with deep pain and sadness in Ukraine. We express our sincere condolences to the family of the deceased and wish speedy recovery to the injured. We consider the serious incident, which occurred inside territory controlled and supported by Russia and illegally armed groups, a confirmation of Moscow’s and its puppets’ attempts to intimidate the OSCE and nullify the efforts of Ukraine and the SMM to stabilize the situation on the contact line. We call on Russia to fulfill its obligations under the Minsk agreements, to take all urgent measures in order to immediately stop provocations against OSCE observers, and to ensure full security of the SMM and its unhindered access to all occupied territory, including to the temporarily uncontrolled sections of the Ukrainian-Russian border. Ukraine will do everything possible to ensure an immediate, full and impartial investigation of the crime in order to bring the perpetrators to justice.”
4. US State Department statement on death of OSCE monitor
On April 23, US State Department spokesperson Mark Toner stated, “The United States is shocked and deeply saddened by the death of a U.S. citizen serving as a paramedic with the Organization for Security and Cooperation in Europe (OSCE) Special Monitoring Mission (SMM), when his vehicle struck an explosive in separatist controlled territory in eastern Ukraine. We extend our deepest and heartfelt condolences to his family, friends, and loved ones, and we wish a quick recovery for those injured in the blast. This death underscores the increasingly dangerous conditions under which these courageous monitors work, including access restrictions, threats, and harassment. The United States urges Russia to use its influence with the separatists to allow the OSCE to conduct a full, transparent, and timely investigation. Since its establishment in 2014, the OSCE SMM has played a vital role in its role of monitoring the Minsk agreements designed to bring peace to eastern Ukraine. This incident makes clear the need for all sides- and particularly the Russian-led separatist forces-to implement their commitments under the Minsk Agreements immediately. This includes a real and durable ceasefire, withdrawal of heavy weapons, and disengagement from the line of contact. The brave monitors of the SMM have the full support of the United States, and we condemn in the strongest terms all acts of hostility and intimidation toward SMM monitors. They must also have safe, full, and unfettered access throughout the conflict zone. The United States again calls upon Russia to use its influence with the separatists to take the first step toward peace to eastern Ukraine and ensure a visible, verifiable, and irreversible improvement in the security situation.” 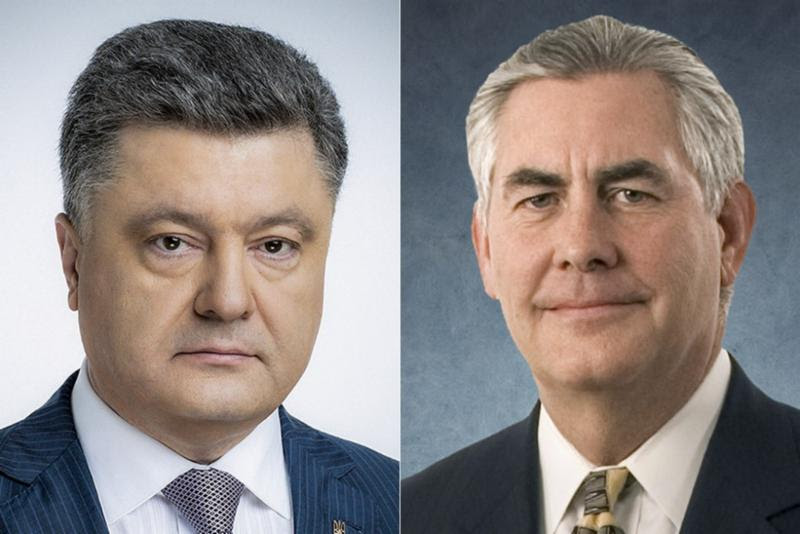 5. US Secretary of State: Sanctions on Russia will remain in place until Crimea returned to Ukraine and Minsk commitments fully implemented
On April 23, US State Department spokesperson Mark Toner stated, “Secretary Tillerson phoned Ukrainian President Petro Poroshenko today to discuss his recent trip to Moscow and his message to the Russian leadership that, although the United States is interested in improving relations with Russia, Russia’s actions in eastern Ukraine remain an obstacle. The Secretary emphasized the importance of Ukraine’s continued progress on reform and combating corruption. The Secretary accepted condolences from President Poroshenko on the death today of a U.S. member of the Organization for Security and Cooperation in Europe (OSCE) Special Monitoring Mission (SMM). The leaders agreed that the OSCE SMM has played a vital role in its role of monitoring the Minsk agreements designed to bring peace to eastern Ukraine, and that this tragic incident makes clear the need for all sides- and particularly the Russian-led separatist forces-to implement their commitments under the Minsk Agreements immediately. Secretary Tillerson reiterated the United States’ firm commitment to Ukraine’s sovereignty and territorial integrity and confirmed that sanctions will remain in place until Russia returns control of the Crimean peninsula to Ukraine and fully implements its commitments in the Minsk agreements.”
6. US Army Europe on NCO Training in Ukraine
On April 22, US Army Europe reported, “Today, 40 young leaders from the 45th Infantry Brigade Combat Team graduated the Army’s Basic Leader Course. A significant achievement, but not necessarily unique – until you consider the circumstances – the Thunderbirds are deployed to a spartan environment in Western Ukraine.  Mobilized in support of Joint Multinational Training Group-Ukraine, the Thunderbirds’ mission is to train the Ukrainian army to NATO standards, develop their noncommissioned officer corps, and help them to establish a combat training center, so that in the future, they can continue to train themselves. […] BLC is the first step in the U.S. Army’s noncommissioned officer professional education system. Currently, the JMTG-U mission is based around a 55-day training cycle. A short administrative reset period between rotations allowed just enough time for the BLC students to complete their own developmental training. […] The BLC curriculum is normally 22 days, but due to mission constraints, the program was condensed. The compressed timeline made the course all the more challenging. Students completed all requirements for graduation in just 18 days. The students conducted physical and mental training including land navigation, tactical situational exercise lanes, and health and fitness training. They also learned about resiliency, suicide prevention, equal opportunity, SHARP, and ethical problem solving.”
0 Likes