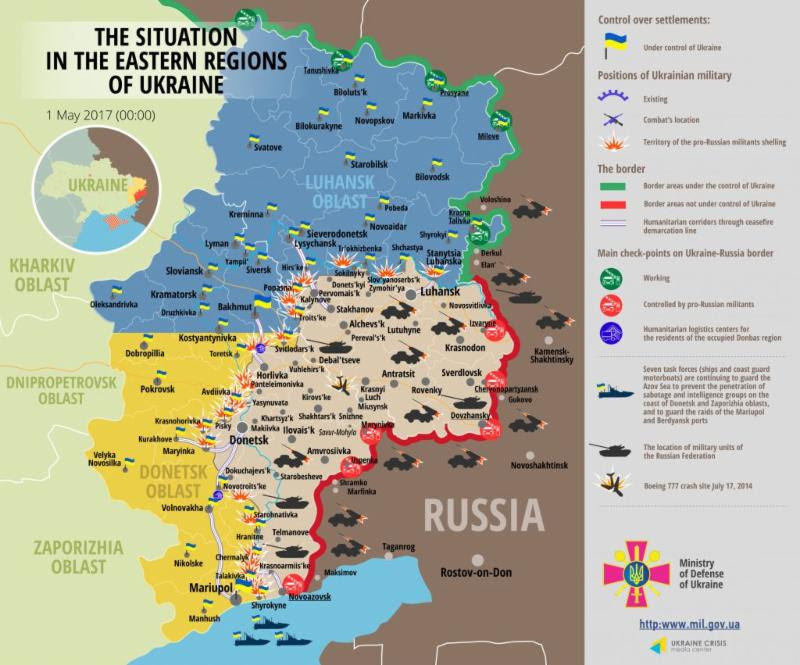 2. Fitch Affirms Ukraine at ‘B-‘; Outlook Stable
On April 28, Fitch Ratings “affirmed Ukraine’s Long-Term Foreign- and Local-Currency Issuer Default Ratings (IDRs) at ‘B-‘ with a Stable Outlook. The issue ratings on Ukraine’s senior unsecured foreign- and local-currency bonds have also been affirmed at ‘B-‘ and the sovereign’s short-term senior unsecured local currency bonds at ‘B’. The Country Ceiling has been affirmed at ‘B-‘ and the Short-Term Foreign-Currency and Local-Currency IDRs at ‘B’. […] International reserves rose to USD16.7 billion in early April boosted by the latest IMF disbursement (USD1 billion), and the second instalment (EU600 million) of the EU Macro-Financial Assistance Programme. Reserves could increase further to USD18.1 billion (3.6 months of CXP) by year-end, but Ukraine’s external buffers remain weaker than ‘B’ peers (4 months of CXP). Increased exchange rate flexibility, manageable foreign-currency commitments and moderate external imbalances mitigate near-term pressures on international reserves. FX controls still cushion external liquidity, although they have been gradually reduced. The continuation of the Fund programme (third review completed) is positive for Ukraine’s credit profile, as it supports external financing, underpins confidence and provides reform momentum. However, further disbursements from the IMF and other international partners will depend on progress in the structural reform agenda, which is subject to delays and execution risks. Key reforms benchmarks include pensions, land sales, privatisation and progress in the fight against corruption,” Fitch Ratings stated.

3. EU launches project to strengthen community policing in 20 Ukrainian districts
The EU Advisory Mission to Ukraine stated on April 27, “The EU launched a EUR 6 million project today with the name ‘Support to Police Reform in Ukraine’ (SPRU), which will strengthen community policing in 20 police districts in mid-sized towns in the Kyiv, Kharkiv and Lviv regions and support the reform of public order policing in Ukraine. It builds on activities already delivered by the EU Advisory Mission Ukraine (EUAM) and will be implemented – over 18 months – by the Swedish police and the United Nations Office for Project Services (UNOPS), with the support of EUAM. […] Community policing is a concept which aims to build strong links between the police and the community they serve, for example via Community Action Groups involving different community stakeholders, such as local authorities, local businesses, religious leaders, etc. It also encourages a holistic approach to preventing and solving crime, with an emphasis on working with the community to identify the causes of crime. To improve the relationship between the police and public and support community policing efforts, reception areas of the 20 police stations selected for the project will be refurbished and up to 15 vehicles donated. Working with EUAM, the project will also provide training to promote leadership for senior and mid-level police managers as well as training in other areas such as stress management. […] The project aims to support a new Ukrainian model for public order policing based on the Scandinavian approach. Up to 420 police officers will receive training, with 60 of these expected to become trainers in their own right. The project also foresees the donation of protective equipment to assist public order policing.”
0 Likes