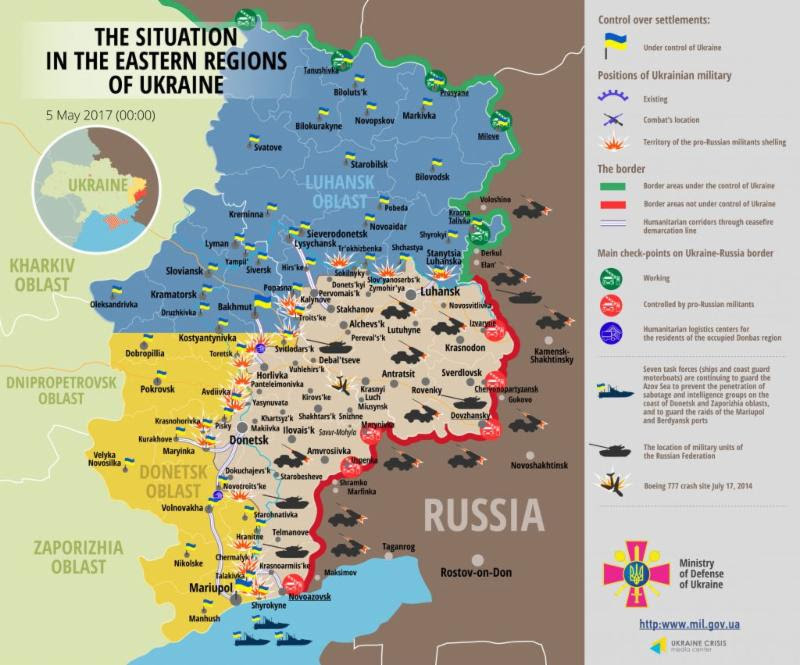 2. World Bank boosts support for Ukraine export development
On May 2, the World Bank approved a $150 million loan for the Access to Long Term Finance project, which will support export-oriented small and medium enterprises in Ukraine. The World Bank stated, “The Joint Stock Company Ukreximbank is expected to implement this project by providing sub-loans to participating banks which, in turn, will pass on the financing to various SMEs in Ukraine. The SMEs will be selected on the basis of their financial health and capacity to develop a sound business export model.”
3. US spending bill includes several measures targeting Russia
Radio Free Europe/Radio Liberty (RFE/RL) reported on May 4, “Congress has authorized a new $100 million effort to counter ‘Russian influence and aggression’ and to support civil society organizations in Europe and Eurasia. U.S. lawmakers on May 4 also backed a measure imposing new restrictions and oversight on Russian diplomats in the United States — a measure that Moscow had angrily warned Washington against.  Both efforts were included in the $1.1 trillion budget to fund the federal government for 2017 that was given final backing by the Senate. It now goes to the White House for President Donald Trump’s signature. The $100 million fund is the product of several proposals that have circulated in the House and Senate in recent months as lawmakers looked to push back against Russia’s perceived interference in Europe and elsewhere. A growing number of Democrats and Republicans have pointed to the spread of fake news, foreign funding of political parties, outright propaganda, and other covert activities as indications of an aggressive Russian effort to meddle in or subvert governments seen as hostile to Moscow. […] The $100 million allocation, called the Countering Russian Influence Fund, is aimed specifically at Europe, earmarked for ‘civil society groups involved in rule of law, media, cyber, and other programs that strengthen democratic institutions and processes, and counter Russian influence and aggression,’ according to the legislation. The money will go to ‘support democracy programs in the Russian Federation, including to promote Internet freedom, and shall also be made available to support the democracy and rule of law strategy’ under State Department policies. The legislation also directs the money be made available to so-called Eastern Partnership countries — a European Union program with the ex-Soviet states of Armenia, Azerbaijan, Belarus, Georgia, Moldova, and Ukraine. The funds will help ‘advance the implementation of Association Agreements and trade agreements with the European Union, and to reduce their vulnerability to external economic and political pressure from the Russian Federation.’ Also tacked onto the budget legislation passed by the Senate was an intelligence authorization measure that tightens oversight of Russian diplomats in the United States. This section requires the State Department, the FBI, and the Director of National Intelligence to set up a procedure that would essentially obligate Russian diplomats to give the FBI advance warning about travels beyond the embassy and consulates’ immediate geographic territory. […] The intelligence measure also calls for the creation of a new interagency committee to counter what it calls Russian efforts to manipulate foreign opinion. That is a reflection of the growing bipartisan consensus that emerged in the wake of the U.S. presidential election, when the intelligence community concluded that Moscow actively meddled in the election campaign in support of Trump.”
4. Top US European Commander: Russia seeks to undermine the international order and discredit those who have created it
Testifying at a US Senate Appropriations subcommittee on May 2, US General Curtis M. Scaparrotti, Commander US European Command, stated, “Countries along Russia’s periphery, especially Ukraine and Georgia, are under threat from Moscow’s malign influence and military aggression.[…] Russia’s malign actions are supported by its diplomatic, information, economic, and military initiatives. […] Russia seeks to undermine this international system and discredit those in the West who have created it. […] Russia’s aggression in Ukraine, including occupation and attempted annexation of Crimea, and actions in Syria underscore its willingness to use military force to exert its influence in Europe and the Middle East. In Ukraine, Russia’s willingness to foment a bloody conflict into its third year through the use of proxy forces in the Donbas, and elsewhere, is deeply troubling to our allies and partners, particularly Russia’s closest neighbors. […] Recently in eastern Ukraine, Russia controls the battle tempo, again ratcheting up the number of daily violations of the cease fire and — even more concerning — directing combined Russian-separatist forces to target civilian infrastructure and threaten and intimidate OSCE monitors in order to turn up the pressure on Ukraine[…]Ukraine seeks a permanent and verifiable ceasefire, the withdrawal of heavy weapons and Russian forces, full and unfettered access for OSCE monitors, and control over its internationally-recognized border with Russia.”
0 Likes