2. Human Rights Group: Challenge Putin’s Lies about imprisoned Ukrainian filmmaker Oleg Sentsov
The Kharkiv Human Rights Protection Group (KHPG) reported, “It is exactly three years since Oleg Sentsov, Ukrainian filmmaker and solo father, was arrested in Simferopol, shortly after Russia invaded and annexed Crimea.  His trial and 20-year-sentence have been condemned by the entire international community, yet Russian President Vladimir Putin keeps repeating the same narrative, that Sentsov was tried and convicted of ‘terrorism’.  It is the magic word that Moscow has used to impose a sentence far longer than those in Soviet times passed against dissidents.  Terrorism, however, has a clear meaning, and Putin should be challenged to justify the claim or #FreeSentsov. In just over three years under Russian occupation, there has not been a single terrorist attack in Crimea, yet Russia has either convicted or is holding 23 men in indefinite detention on ‘terrorism’ charges. […]  Sentsov, who had played an active role in Euromaidan, coordinated efforts by Maidan car owners to take food, water and medical supplies to the Ukrainian soldiers in Crimea besieged by Russian forces.  When the Ukrainian soldiers were given just a couple of hours to leave Crimea, it was Sentsov who organized their evacuation. […] Putin is hoping that the international community will gradually forget about the men, and that Russians have been so duped by the state-controlled media that they will believe that the men are imprisoned for ‘terrorism’. Not a chance, and it is important that he understands this now. He and all those judges, prosecutors and others implicated in the monstrous sentences knowingly passed on innocent men. We are therefore seeking sanctions against all those who have taken part  in what has rightly been termed ‘ideologically motivated state terror’. With Russia’s repressive measures against Ukrainians, especially in occupied Crimea, on the increase, it is important to send a clear message that there can be no impunity for those who obey criminal orders. Please help #FreeSentsov and other Ukrainian political prisoners by asking politicians and journalists in your country to support targeted sanctions and to demand answers from Moscow.  Why, 150 years after Russia abolished serfdom, is it treating Ukrainians as serfs to be seized together with its Crimean land-grab?  How, over a quarter of a century after the collapse of the Soviet Union, has Russia descended to sentencing those who oppose its invasion for 20 years?” The full report from KHPG is available at http://khpg.org/en/index.php?id=1494021982
3. Ukraine’s Armed Forces participate in Strong Europe Tank Challenge
US Army Europe reported on May 7, “Gathered at a display of military tanks here, during this overcast Sunday afternoon were Soldiers from six different nations: Austria, France, Germany, Poland, Ukraine and the United States.  At today’s opening ceremony for the Strong Europe Tank Challenge (SETC), multinational Soldiers climbed onto each participating unit’s tank to compare and contrast as well as get to know the competition.The second annual training opportunity is a U.S. Army Europe and German Army hosted-event that brought platoons and their tanks to compete against each other in offensive and defensive operations as well as vehicle identification, battle damage assessment and precision maneuvers. The event will take place here, May 7-12. […]Alongside improving mission readiness, multinational training aims to build unit cohesion. Although competitions usually center around who will take home bragging rights, the SETC is focused on unity and partnership. ‘This is a competition,’ said Sgt. Maj. David Glenn, 7th Army Training Command’s operations senior noncommissioned officer. ‘But it’s not really about the competition. It’s really about training, partnership, esprit de corps and interoperability.'” 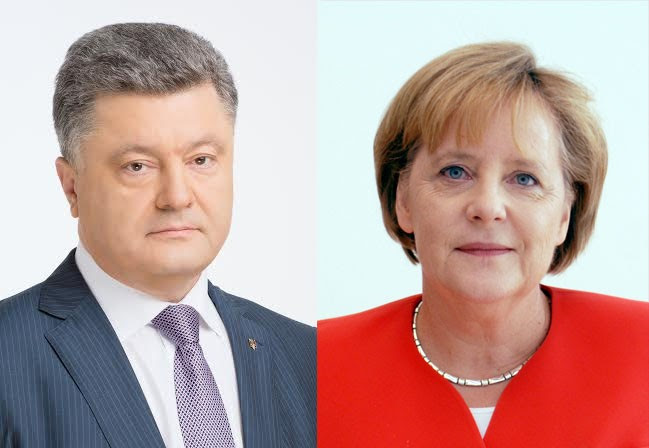 4. Ukraine’s President speaks with German Chancellor
Ukraine’s President Petro Poroshenko spoke with German Chancellor Angela Merkel. Poroshenko’s press service reported, “The two leaders discussed the situation in Donbas and underlined priority of fulfilling the security component of the Minsk agreements. […] Petro Poroshenko and Angela Merkel also condemned the attacks on the OSCE representatives and systemic interference in their work. They emphasized the importance of holding investigation and punishment of those guilty in the attack on the OSCE patrol that took place on April 23. The parties also stressed the necessity of liberation of hostages. The Federal Chancellor informed the President on the aftermath of her negotiations in Russia on May 2. The two leaders underscored the need for continuing work in the Normandy format, particularly with participation of the newly elected President of France. They also agreed on the further schedule of bilateral meetings at the highest level.”
5. Ukraine’s President congratulates Macron on election as President of France
Ukraine’s President Petro Poroshenko congratulated Emmanuel Macron on his election as President of France on May 7, Poroshenko’s press service reported. In a written message to Macron, Poroshenko stated, “The choice of French people is a vivid evidence of victory of the program of a progressive Europe of freedom over an alternative Europe of nationalism. […] Your position in the course of the election campaign gives confidence that with your victory Ukraine has gained a reliable ally in the Normandy format and in its efforts to restore sovereignty and territorial integrity.”
0 Likes