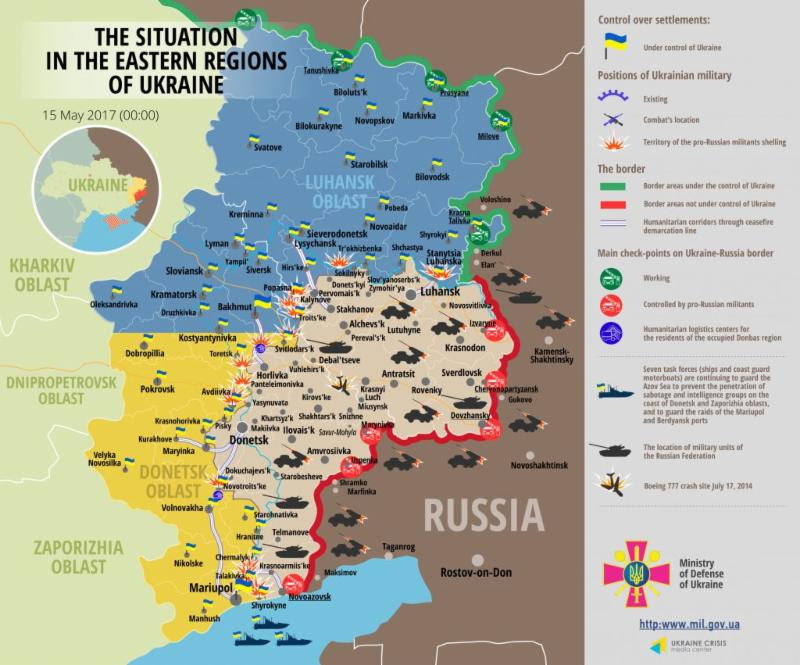 2. Four civilians killed in Avdiivka as result of shelling by Russian-terrorist forces
Ukraine’s Ministry of Internal Affairs reported that on the evening of May 13, Russian-terrorist forces shelled residential areas of Avdiivka, Donetsk oblast. Three civilian women and one man were killed as a result of the shelling by Russian-terrorist forces. One civilian was injured and has been hospitalized.
3. Crimean Tatar Leader: Russia is trying to force Crimean Tatars to leave their homeland
At a press conference on May 12, Crimean Tatar leader Mustafa Dzhemilev spoke about the deteriorating human rights situation in Russian-occupied Crimea. Dzhemilev stated, “The policy aims at forcing the Crimean Tatars out. Conditions are being created to make the Crimean Tatars leave Crimea at their own will. Same thing happened after the first occupation of 1783. Until the Bolshevik revolution of 1917 occurred, [Crimean Tatar] population had decreased from 95 to 25 per cent. Crimean Tatars became a minority in their homeland. Then total deportation of all Crimean Tatars followed in 1944. They [Soviet authorities] were burning books, blowing up mosques and making pavements out of the tomb stones. […] These days Crimea is back to the Soviet times, somewhere in 1937-1938: with denunciations, arrests for voicing an opinion. The difference is that now they are also following your ‘Likes’ on social media.” According to estimates, 50,000 people have left Russian-occupied Crimea, including 20,000 Crimean Tatars. Dzhemilev stated, “We are primarily concerned with the changes in Crimea’s demographics. Half of a million people was brought from the Russian Federation while the Crimeans are being forced out simultaneously.” Tamila Tasheva, co-founder and coordinator of the NGO Crimea SOS stated, “The first thing that the occupation authorities started doing is marginalizing Crimean Tatars from the rest of Crimea’s population. There have been attempts to ban the Muslim call to prayer. It is from such cases that genocide of a people starts.”
4. Ukraine’s PM meets with Israel’s PM
Ukraine’s Prime Minister Volodymyr Groysman met with Israel’s Prime Minister Benjamin Netanyahu during an official visit to Israel. A number of bilateral agreements were signed: A joint declaration regarding cooperation in preventing disasters and dealing with their consequences; A plan for bilateral cooperation in health and medicine for 2017-2021; An administrative agreement between the Israel Tax Authority and the Ukrainian Fiscal Service on bilateral trade, and the Implementation of a protocol for the construction sector pursuant to the bilateral agreement on the temporary employment of Ukrainian workers in specific sectors of the Israeli labour market, Prime Minister Netanyahu’s press service reported.
0 Likes