1. Russian Invasion of Ukraine
The General Staff of Ukraine’s Armed Forces reported at 12:30 PM Kyiv time that in the last 24 hours, no Ukrainian soldiers were killed or wounded in action. Towards Donetsk, Russian-terrorist forces shelled Ukrainian positions near Avdiivka with mortars. At Verkhnotoretske, Russian-terrorist forces fired on Ukrainian positions. Towards Mariupol, Russian-terrorist forces shelled Ukrainian positions at Krasnohorivka and Novomykhailivka with mortars. On the Pavlopil-Shyrokyne line, Russian-terrorist forces fired on Ukrainian positions. Towards Luhansk, Russian-terrorist forces shelled Ukrainian positions near Popasne with mortars. At Krymske, Shchastya and Stanytsia Luhanska, Russian-terrorist forces fired on Ukrainian positions.
2. NATO Chief: Russia must withdraw its thousands of soldiers from Ukraine
The North Atlantic Council, headed by NATO Secretary General Jens Stoltenberg is visiting Kyiv. At a press conference following a meeting with President Poroshenko, NATO Secretary General Stoltenberg stated, “the partnership between NATO and Ukraine is a strong mutual partnership where we help to strengthen each other and I’m very grateful for that and also for you personal commitment and your personal leadership in developing this partnership.
We have just discussed the situation in Eastern Ukraine. The conflict continues to claim lives. The fighting has killed more than 10,000 people, including almost 3,000 civilians.  It is clear that the ceasefire is not holding […]
The Minsk Agreements remain the only path towards peace. Russia must withdraw its thousands of soldiers from Ukraine and stop supporting the militants, with command and control, and military equipment. NATO stands firm in our support for Ukraine’s sovereignty and territorial integrity. We do not, and we will not, recognise Russia’s illegal and illegitimate annexation of Crimea.
NATO will continue to provide Ukraine with practical support. Today, we reviewed our Comprehensive Assistance Package for Ukraine. Through ten different Trust Funds, NATO Allies have pledged almost forty million euros to support Ukraine. In areas such as command and control, cyber defence and medical rehabilitation. We are now working to provide Ukraine with satellite communications equipment. In recent days, we have delivered state of the art cyber defence equipment, helping key government institutions, to better investigate cyber security incidents and to protect themselves from cyber-attacks, such as those we saw recently. […]
I welcome the steps you, President Poroshenko, and the Ukrainian government have taken to implement key reforms and to counter corruption. We encourage you to build on this progress. These reforms are essential, to ensure security and prosperity for all Ukrainians and to bring Ukraine closer to NATO.”
3. US Secretary of State travels to Kyiv
US Secretary of State Rex Tillerson was in Kyiv on July 9. At a press conference following a meeting with President Poroshenko, Tillerson stated, “I think it is important to be very clear on what our goals are, the United States’ goals are, with respect to the situation here. And first and foremost, it is to restore Ukraine’s territorial sovereignty and integrity. The United States has already contributed more than $600 million since the beginning of this crisis. We also think it’s very important that we seek the safety and the security of all Ukrainian citizens regardless of their ethnicity, their nationality, or their religion. This is a fundamental element to Ukraine’s sovereignty as well and the protection of all Ukrainian citizens.
I think as long as the parties commit themselves to these goals, I am confident that we can make progress. I’ve been very clear in my discussions with Russian leadership on more than one occasion that it is necessary for Russia to take the first steps to de-escalate the situation in the east part of Ukraine, in particular by respecting the ceasefire, by pulling back the heavy weapons, and allowing the OSCE observers to carry out their responsibilities. This is necessary for us to make any movement in particular. […]
We do call on Russia to honor its commitments that were made under the Minsk accords and to exercise influence over the separatists in the region whom they do hold complete control over, and we call on them, again, to immediately call on their proxies to cease the violence that is ongoing in east Ukraine. […]
The U.S. and EU sanctions on Russia will remain in place until Moscow reverses the actions that triggered these particular sanctions.”
4. 17th Sea Breeze Exercise begins in Black Sea 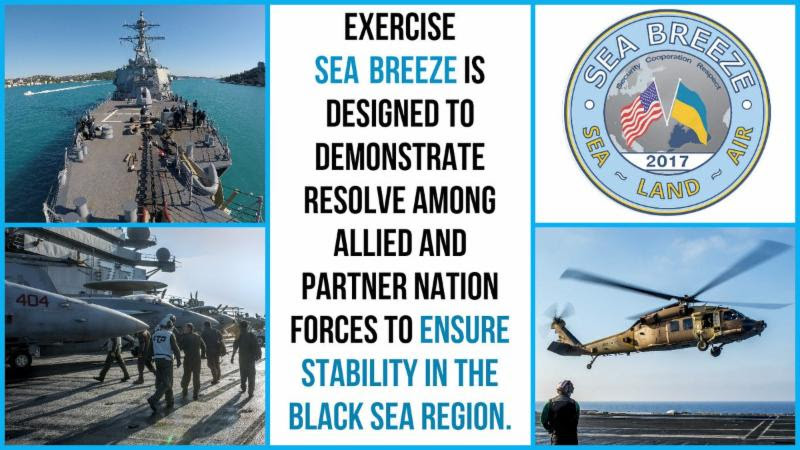 The US 6th Fleet reported, “The 17th edition of exercise Sea Breeze will take place in the Black Sea from July 10-22, 2017. Air, land, sea, and amphibious forces from 17 nations will participate in the U.S./Ukraine co-hosted exercise this year, which is intended to provide high end training for the participants.
Sea Breeze 2017 is an annual recurring multinational exercise that will focus on a variety of warfare areas to include maritime interdiction operations, air defense, anti-submarine warfare, damage control tactics, search and rescue, and amphibious warfare. The exercise is designed to enhance flexibility and interoperability, strengthen combined response capabilities, and demonstrate resolve among allied and partner nation forces to ensure stability in the Black Sea region.
This year’s participating nations include: Belgium, Bulgaria, Canada, France, Georgia, Greece, Italy, Lithuania, Moldova, Norway, Poland, Romania, Sweden, Turkey, Ukraine, the United Kingdom, and the United States.”
0 Likes