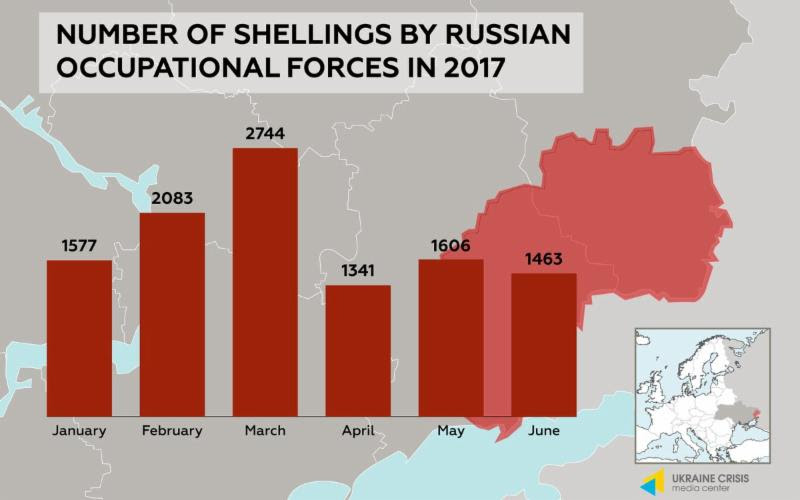 Petro Poroshenko informed of today’s visit to the town of Shchastia located close to occupied Luhansk, and his meeting there with representatives of forward patrol base of the OSCE [Special Monitoring Mission], which is permanently based in Stanytsia Luhanska. The President of Ukraine expressed full support to its 24-hour activity in this location. Petro Poroshenko also called for immediate release of all Ukrainian hostages illegally held in captivity.
As a result of the phone conversation, the leaders of the Normandy format agreed the following joint statement:
The Heads of State and Government of the “Normandy” format, France, Germany, Russia, and Ukraine, held a phone call on August 22, 2017.
They expressed their strong support for the imminent decision of the Trilateral Contact Group on August 23 to announce a ceasefire on the occasion of the beginning of the school year.
The leaders expressed their expectation that such a ceasefire would turn into a sustainable improvement of the security situation, for the benefit of the schoolchildren and for the entire civilian population in Donbas.
On the basis of a sustainable ceasefire, the leaders committed to personally stay engaged in the further implementation of the Minsk agreements.”
3. Parliamentary Secretary to Canada’s Minister of Foreign Affairs to attend Ukraine’s Independence Day military parade
Canada’s Department of Global Affairs stated, “Matt DeCourcey, Parliamentary Secretary to the Minister of Foreign Affairs, today announced that he will attend the military parade on Ukraine’s Independence Day on Thursday, August 24, 2017, in Kyiv, to mark the 26th anniversary of the country’s independence.
Parliamentary Secretary DeCourcey will join members of the Canadian Armed Forces as they proudly march alongside Ukrainian servicemen and women, as well as military members from nine other countries, including several NATO allies-Estonia, the United Kingdom, Latvia, Lithuania, Poland, Romania and the United States-as well as Georgia and Moldova. Canada is steadfast in its support for Ukraine’s efforts to secure its future as a stable, democratic and prosperous country, which includes its ongoing defence reform efforts.”
4. U.S. sends first coal shipment to Ukraine to bolster energy security
Radio Free Europe/Radio Liberty (RFE/RL) reported, “The United States has sent its first shipment of anthracite coal to Ukraine from the U.S. port of Baltimore under a deal designed to increase Ukraine’s energy security.
Pennsylvania-based XCoal Energy and Resources signed a contract with Ukrainian state energy company Centerenergo on July 31 to provide 700,000 tons of anthracite coal in the next few months.
The deal followed talks between Ukrainian President Petro Poroshenko and U.S. President Donald Trump’s administration in June.
The first shipment of 62,000 tons is expected to arrive in Odesa’s Yuzhnyy port in three weeks, Voice of America reported.
At a launching ceremony in Baltimore on August 22, Ukrainian Ambassador to the United States Valeriy Chalyy emphasized the importance of the deal for Ukraine’s energy security. […]
Exports to Ukraine are part of Trump’s plan to turn the United States into an energy-exporting superpower, putting it in direct conflict with Russia in Eastern Europe, where Moscow is currently the dominant energy supplier. […]
For Eastern European states such as Lithuania and Poland, which are heavily dependent on Russian natural gas, Trump has offered to ship liquefied natural gas (LNG) by tanker. This week, Lithuania is expected to receive a first tanker delivery of LNG from the United States.”
0 Likes