Magnitsky Act now the Law of the Land!19 October 2017Next

1. Russian Invasion of Ukraine
The General Staff of Ukraine’s Armed Foreces reported at 12:30 PM Kyiv time that in the last 24 hours, no Ukrainian soldiers were killed and three Ukrainian soldiers were wounded in action. Ceasefire violations by Russian-terrorist forces escalated for the third day in a row. In the last 24 hours, Russian-terrorist forces fired on Ukrainian positions 53 times in total, including at least 11 times with heavy weapons. 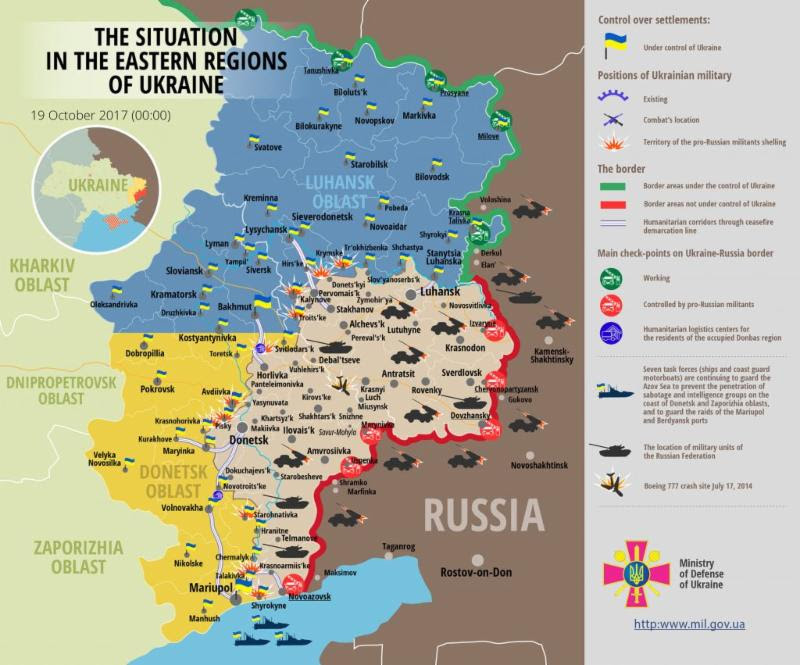 The Financial Times reported, “Ukraine’s parliament adopted crucial legislation aimed at fixing the country’s ailing healthcare system on Thursday, as opposition groups staged a third day of protests calling on the ruling coalition to speed up political and economic reforms.
A new healthcare setup based on western models – replacing the remnants of a Soviet system that left Ukraine with one of the highest mortality rates in Europe – was supported by 240 MPs – more than the 226 required for a majority. Officials said financing ‘will follow patient’ covered by state medical insurance, who will now choose their primary care doctors. Doctors that service more patients will see a boost in earnings.
Currently a large share of healthcare funding is inefficiently spent and pocketed by vested interests along layers of bureaucracy, leaving few resources for care and medical professionals’ salaries. Patients are often forced to make illegal cash payments to underpaid doctors.
‘Passage of the reform will be a positive sign that Ukraine is moving in the right direction and making progress towards becoming a European country,’ the healthcare ministry said in a statement ahead of the vote. The IMF and Ukraine’s western supporters have backed the reform efforts, which have been pushed through despite fierce internal opposition.”
3. Canada’s Magnitsky Act receives Royal Assent
On October 18, Bill S-226 “Justice for Victims of Corrupt Foreign Officials Act (Sergei Magnitsky Law)” received Royal Assent.
The Magnitsky Law, sponsored by Senator Raynell Andreychuk, provides “for the taking of restrictive measures in respect of foreign nationals responsible for gross violations of internationally recognized human rights. It also proposes related amendments to the Special Economic Measures Act and to the Immigration and Refugee Protection Act.” The legislation was tabled in the House of Commons by James Bezan, (MP, Selkirk-Interlake-Eastman).
Upon the adoption of the Magnitsky Act, Chrystia Freeland, Canada’s Minister of Foreign Affairs, stated, “This new law, which has received cross-partisan support in Parliament, is a clear demonstration that Canada takes any and all necessary measures to respond to gross violations of human rights and acts of significant foreign corruption.”
4. Ukraine’s President: Parliamentary immunity will be abolished
Ukraine’s President Petro Poroshenko stated that immunity for Members of Parliament will be abolished in Ukraine and that he expects Parliament to endorse the respective constitutional amendments at the next session of parliament. Today Parliament sent a bill on abolishing MP’s immunity from prosecution to the Constitutional Court for review.
Poroshenko stated, “We should pay tribute to people’s deputies – today they have made a responsible political step to abolish their own privilege. I believe that at the next session, the Verkhovna Rada will not lose its courage and provide three hundred votes” in order to abolish immunity. Poroshenko added, “I really hope that those who have been hyping themselves on the topic of immunity over the past days will not change their position when they see that it is already not PR, but a new reality.”
0 Likes