Ukraine: Weekly Bulletin
November 25-December 1,2017
1. Russian Invasion of Ukraine
The General Staff of Ukraine’s Armed Forces reported that during the week of November 24-30, three Ukrainian soldiers were killed and six Ukrainian soldiers were wounded in action on the eastern front. Throughout the week, Russian-terrorist forces opened fire 136 times on Ukrainian positions on the Luhansk, Donetsk and Mariupol sectors of the front, including at least 36 times with heavy weapons.
2. “Court” in Russian-occupied Crimea extends illegal detention of Ukrainian political prisoner Volodymyr Balukh

The Kharkiv Human Rights Protection Group (KHPG) reported on November 30, “A court in Russian-occupied Crimea has yet again extended the detention of Volodymyr Balukh, despite the clear illegality of the move even according to Russian law, Balukh’s serious health issues and the fact that his elderly and nearly blind mother has been left without any support.  Russia’s revenge for the Ukrainian flag on Balukh’s home and his unwavering opposition to annexation is effectively unconcealed, with the lawlessness presumably intended as a warning to others.
Balukh has already been in detention for well over 11 months, despite the deeply flawed nature of the charges against him and the High Court ruling on October 2 which overturned his conviction and 3.7 year sentence.  He was recognized as a political prisoner by both Ukrainian human rights groups and the Russian Memorial Human Rights Centre within two months of his arrest, and the refusal to release him following the High Court ruling has been viewed as yet more proof of the political nature of the prosecution.
Balukh’s lawyer, Olga Dinze has no illusions about any possibility of an acquittal.  She says that the original sentence was revoked only because the defence complained to the High Court about the judge who had taken part in both earlier proceedings against Balukh, and in the case appealed.  The High Court therefore ordered a ‘retrial’, however the prosecution’s indictment remains the same, and Balukh is still imprisoned. […]
Balukh himself spoke of the excruciating pain he is suffering in detention due to a serious medical condition which has been aggravated by the conditions in detention and by the failure to provide him with any medical care.  He said that he would regard the refusal to release him as evidence of deliberate action aimed at physically eliminating him.  The previous hearing had needed to be adjourned and Balukh taken to hospital, yet he was still returned to the detention unit. […]
While Volodymyr says that he could not have acted any other way and that it’s better to die standing, than to go down on his knees, he is clearly tormented with remorse at the suffering he has caused his mother, and the fact that he is not there to help her.  Natalya Balukh is 75, can scarcely see and is in ill-health yet is now forced to tend to her small farm by herself.  […]
Volodymyr Balukh was arrested on Dec 8, 2016 after an unexplained search which allegedly found 90 bullets and several trotyl explosive devices in his attic.  He had no record of violence and the constant searches and harassment he had faced since Russia’s invasion of Crimea for his openly pro-Ukrainian position made it inconceivable that he could have held anything illegal in his home.  The full report from KHPG is available here
3. European Commission ready to consider further Macro-Financial Assistance to Ukraine, provided reform momentum is stepped up

The European Commission stated on December 1, “Ukraine is – and will remain – one of the EU’s key partners. As such, the EU will continue to stand by Ukraine and its citizens as the country further progresses with its reforms and economic adjustment.
A primary instrument in the EU’s overall strategy vis-a-vis Ukraine was to provide €1.8 billion in MFA via the programme approved in April 2015, from which €1.2 billion have already been disbursed in two tranches. […]The availability of this current MFA programme expires at the beginning of January 2018.
As regards the third and final tranche of MFA, Ukraine has fulfilled a large share of the policy commitments agreed with the EU. This includes important measures to increase transparency in public finance management; to launch public administration, judicial and governance reform; to advance ongoing reforms of the energy sectors, improve the business environment and reinforce social safety nets. These structural reforms will benefit Ukraine’s citizens, which is the ultimate objective of the EU’s assistance.
Four of the measures linked to the third and final tranche of this MFA currently remain outstanding. Against this background, the Commission is not in a position to disburse the last tranche of the current MFA programme. We encourage Ukraine to maintain the reform momentum in the many areas that have progressed well, and complete the measures outstanding under the current programme, with the support of all stakeholders. […]
At a meeting between European Commission Jean-Claude Juncker and President of Ukraine Petro Poroshenko in the margins of the Eastern Partnership Summit, which took place in Brussels on 24 November 2017, President Poroshenko expressed an interest in further MFA from the EU. President Juncker expressed his openness in this regard. From Ukraine’s side, reinforcing the reform momentum and resisting internal pressures for policy reversals on important reforms will be crucial, particularly over the coming months.
The Commission stands ready to assess the relevance of a successor MFA operation and, if judged warranted, to present a proposal for a new MFA operation in early 2018. An economic assessment, including of external financing needs, will have to be conducted and the details of this proposal would have to be worked out.”
4. US Secretary of State: The US and Europe recognizes the active threat of a resurgent Russia 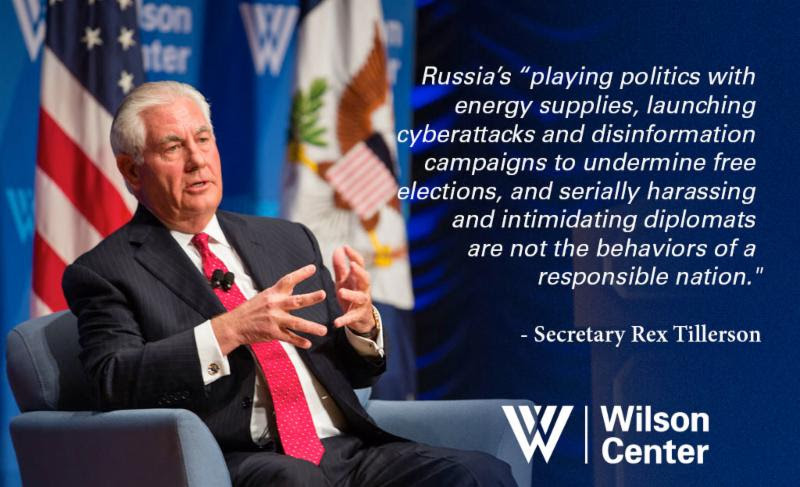 Speaking at the Wilson Center on November 28, US Secretary of State Rex Tillerson stated, “Over the past 10 months, we have embarked on a new strategic policy that bolsters European and American security: namely, a recommitment to Europe in the wake of the failed ‘Russia reset;’ a new effort to adapt security institutions to combating emerging threats like terrorism, cyberattacks, and nuclear proliferation; and an expectation that European nations accept they are more secure when they contribute more toward their own defense. […]
Russia continues aggressive behavior toward other regional neighbors by interfering in election processes and promoting non-democratic ideals. We, together with our friends in Europe, recognize the active threat of a recently resurgent Russia. […]
The EDI also includes $150 million to help Ukraine build its capacity for defending its territorial integrity. The United States recognizes that the war in Ukraine – in which people are still dying every day – must come to an end. We have repeatedly urged Russia to begin the path to peace by honoring its commitments under the Minsk agreements. Any resolution of the war that does not entail a fully independent, sovereign, and territorially whole Ukraine is unacceptable.
Russia chose to violate the sovereignty of the largest country in Europe. The United States and Europe have stood shoulder-to-shoulder since 2014 in confronting this Russian aggression with a coordinated sanctions policy. Our transatlantic unity is meant to convey to the Russian Government that we will not stand for this flagrant violation of international norms.
We hope Russia will take steps to restore Ukraine’s full sovereignty and territorial integrity and fully implement its Minsk commitments, allowing us to begin then the process of restoring normal relations. But let me be clear, Minsk-related sanctions will remain in place until Russia reverses the actions that triggered them.   We are committed to the success of an independent and whole Ukraine. […]
Russia has often employed malicious tactics against the U.S. and Europe to drive us apart, weaken our confidence, and undermine the political and economic successes that we have achieved together since the end of the Cold War. Playing politics with energy supplies, launching cyber attacks and disinformation campaigns to undermine free elections, and serially harassing and intimidating diplomats are not the behaviors of a responsible nation. Attacking a neighboring country and threatening others does nothing to improve the lives of Russians or enhance Russia’s standing in the world.” Secretary Tillerson’s full remarks are available here: The US and Europe: Strengthening Western Alliances
5. Atlantic Council: Will President Trump Finally Arm Ukraine?
Writing at the Atlantic Council, Stephen Blank, Senior Fellow at the American Foreign Policy Council, stated, “There’s a real possibility that the United States will finally send lethal defensive weapons to Ukraine. The country has been fighting a defensive war in its east for nearly four years, after Russia seized Crimea and Russian-backed separatists invaded eastern Ukraine in 2014. Many experts have argued that better weapons would change the tactical imbalance between Kyiv and Moscow. […]
Now the National Security Council has approved a $47 million grant package that would send anti-tank Javelin systems, counter-battery radar, and counter-mortar weapons to Ukraine and forwarded its opinion to President Donald Trump for consideration. This is the latest step in a process that reflects the approval of the State Department, Pentagon, and Congress. Most news reports left out an important fact: this decision almost certainly took the views of US Ambassador Kurt Volker into consideration based on his recent negotiations with Russia; Volker previously revealed that the United States was considering sending such weapons to Kyiv.
Although Trump reportedly desires that Ukraine pay at least in part for these weapons, Congress has authorized him to transfer these designated defensive weapons to Ukraine if he so chooses. This means that the full institutional weight of the US government, with the exception of the president, recommends the transfer of these weapons to Kyiv. […]
Virtually every US government agency has rebuffed the myth of escalation dominance. Moscow might be inclined to escalate in return for arms transfers to Ukraine, but the costs would be staggering for Russia. Putin knows that escalation means many more Russian casualties that could not be concealed from the Russian public and would invariably lead to even more crippling sanctions. Russian escalation in Ukraine would likely intensify and accelerate NATO’s own ongoing rearmament and forward deployments in the Baltic and Black Sea areas and accelerate arms transfers to Ukraine. […]

Ukraine is fighting our fight against a common aggressor and showing our understanding of this situation by finally giving it the weapons to defend itself makes eminent sense.”