Ukraine: Daily Briefing
December 4, 2017, 6 PM Kyiv time
1. Russian Invasion of Ukraine
The General Staff of Ukraine’s Armed Forces reported at 12:30 PM Kyiv time that in the last 24 hours, Russian-terrorist forces escalated the situation on the eastern front. In the last 24 hours, one Ukrainian soldier was killed and four Ukrainian soldiers were wounded in action. Russian-terrorist forces fired on Ukrainian positions 38 times in total on the Luhansk, Donetsk and Mariupol sectors of the front, including at least 8 times with heavy weapons – mortars and tanks. 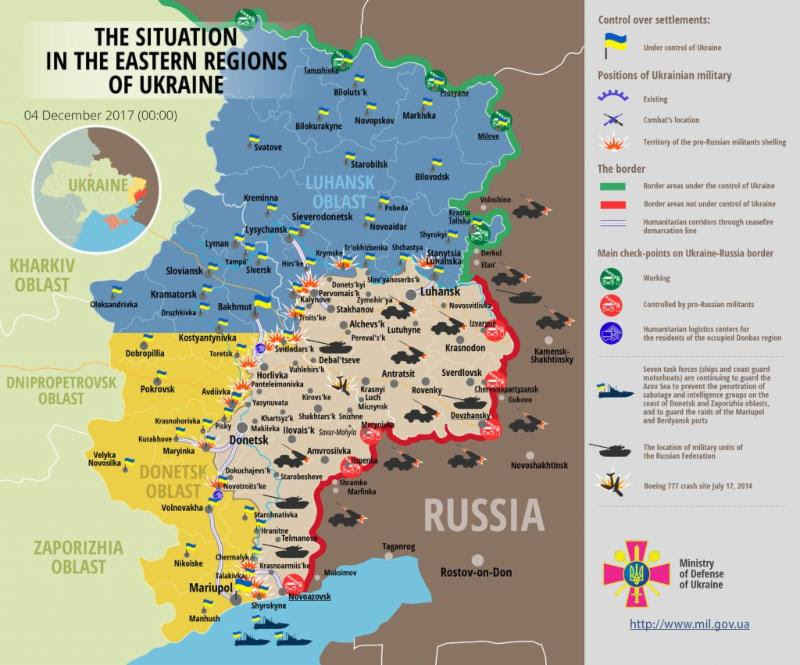 2. US National Security Advisor: We’re continuing to strengthen Ukrainian defensive capabilities
Speaking at the Reagan National Defense Forum on December 2, US National Security Advisor H.R. McMaster stated, “What we’re continuing to do is strengthen Ukrainian defensive capabilities. […] The Ukrainians are very capable. […] The Ukrainians are embarked on a significant governmental reform effort, but also a military reform effort. And I think it would be extremely difficult for Russian proxies, Russia, to be able to make significant gains if they were to extend the territory that they’re controlling after their invasion of Ukraine.”
3. Ukraine, GE Transportation agree on major upgrade of Ukrzaliznytsia rolling stock
Ukraine’s Cabinet of Ministers reported, “The Cabinet of Ministers of Ukraine has wound up negotiations with the American giant GE Transportation. By the end of the year, an agreement on a strategic partnership for the implementation of the 7-year rolling stock renewal program for PJSC Ukrzaliznytsia will be signed. Relevant arrangements were reached during the meeting of the company management with Prime Minister of Ukraine Volodymyr Groysman.
‘We are happy to announce we have completed our negotiations and arrived at accord to adjust and ink all the documents by the end of the year. The Government will facilitate this process,’ the Head of Government noted. […]
The parties agreed that within the framework of implementation of all arrangements the localization (use of Ukrainian capacities) would increase up to 40%. Meanwhile, it has been agreed that Ukrainian-made products basing on technology and complying with GE standards will be used in other GE Transportation projects in other countries. […]
During the negotiations, the parties emphasized that the involvement of world leaders in Ukraine, such as GE Transportation, proves improvement of the business environment in Ukraine and serves a signal for other large market players to start business in our country.”
4. Former NATO Secretary General: Nord Stream 2 pipeline is Putin’s trap for Germany
In an interview with the German newspaper Bild about the proposed Nord Stream 2 pipeline, Former NATO Secretary General Anders Fogh Rasmussen stated, “A trap that Germany is walking into, with serious consequences for its European neighbours. NS2 is the flagship project in Russia’s campaign to keep Europe dependant on its gas, to consolidate its influence in the heart of the EU, and to deprive Ukraine of gas transit fees that it needs to make the European transformation that Germany has rightly been encouraging. […]
German gas demands can easily be met within the existing Nord Stream 1 pipeline and other pipelines running across Eastern Europe, so this is nothing short of a Putin vanity project paid for by German consumers. […]
Gas is not the only thing that will flow through the pipeline; Russian influence will flow too. Europe is seeking to diversify away from its dependence on Russian gas, which Moscow has deployed as a political weapon in recent years. […] With one policy, Germany is backtracking on all the good work that the EU has carried out. […]
Russia also gets to hurt central European states like Slovakia, and particularly Ukraine. With NS2 it can bypass these reliable transit states and, in Ukraine’s case, deprive them of around 2 billion Euros in transit fees per year – equal to six percent of the country’s entire budget revenue. Germany has rightly invested in Ukraine, to make it a more secure and stable country with a reform process that brings it closer to the EU; yet the government gives with one hand and takes away with the other if they allow this pipeline. […]
Germany has become the de facto leader of the EU, whether it wishes to hold that position or not. A responsibility of leadership is to lead by example, and if Germany is showing that it is willing to sacrifice its neighbours’ security for its own commercial interests, then Germany should not be surprised when other countries decide to do the same – even if that harms Germany. So, economically, I think Germany has little to lose, but politically it has a lot to gain by finally cancelling this project.
I want to see a better relationship between Russia and Europe, but that can only happen when Russia stops invading sovereign states, and desists from interfering in our elections and political processes. If we protest on day one but then continue to support Russian state-owned energy companies on day two, what message are we sending?”
5. Atlantic Council on political rhetoric in Ukraine

Atlantic Council Senior Fellow Adrian Karatnycky wrote on December 1, “Ukraine has experienced some major reforms, particularly the ProZorro electronic procurement system, the restructuring of corrupt banks, and fundamental reforms in the gas sector. Nonetheless, the country still suffers from widespread corruption and a malfunctioning court system that has delayed major cases against allegedly corrupt officials.
In this environment, politicians on all sides have been rushing to claim that they are the true leaders in the fight for corruption. That isn’t a bad thing; their efforts illustrate a healthy political competition that is occurring within constitutional, parliamentary, and electoral bounds. It is likely to lead to progress in creating a new anti-corruption court and in improving the effectiveness of the procuracy, the police, and the recently established National Anti-Corruption Bureau and National Bureau of Investigation.
Ukraine is home to a combative, highly competitive political environment where political leaders are often prone to exaggeration and populism. By no means is the reform process easy and clear-cut. But it is broadly occurring within the context of legitimate democratic discourse, much of it critical of the government and the president.
Increasingly, however, politicians, who were once regarded as responsible voices, are drifting toward extremist rhetoric that is disproportional to the serious problems that exist in Ukraine’s political system. This language is unfortunately also now starting to be accompanied by threats of violence from groups that are often armed and have often engaged in vigilantism. […]
Whatever the failings of the Ukrainian political system, it is far from authoritarian, and these views are veering further away from responsible criticism in a system that has significant scope for peaceful protest and political contestation. […] A gradually reforming Ukraine under attack from Russia cannot afford the luxury of ignoring extreme political rhetoric.”

The full article is available here