Ukraine: Daily Briefing
December 11, 2017, 6 PM Kyiv time
1. Russian Invasion of Ukraine
The General Staff of Ukraine’s Armed Forces reported at 12:30 PM Kyiv time that in the last 24 hours, no Ukrainian soldiers were killed and five Ukrainian soldiers were wounded in action. In the last 24 hours, Russian-terrorist forces opened fire on Ukrainian positions on the Luhansk, Donetsk and Mariupol sectors of the front 35 times in total, including at least 12 times with heavy weapons. 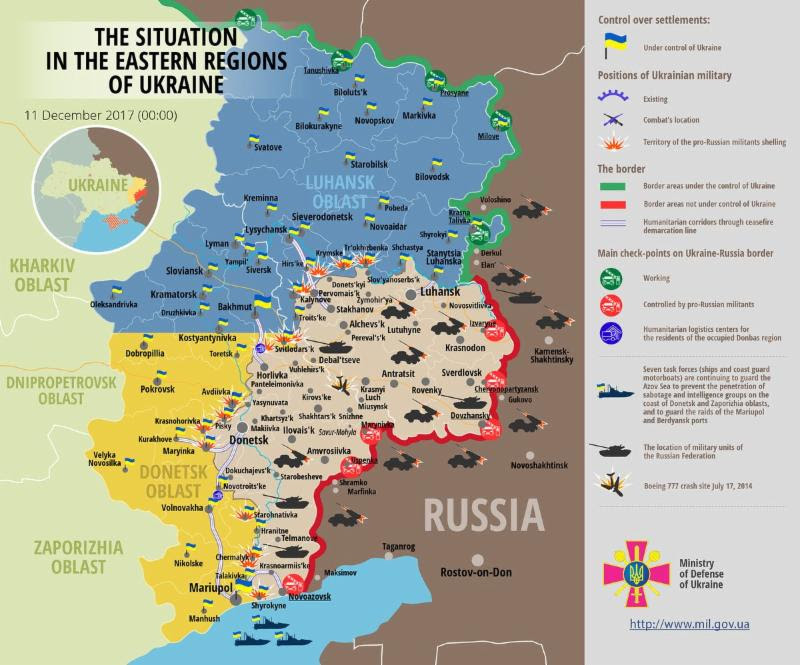 2. Ukraine defense budget up by 28 percent in 2018
The Kyiv Post reported, “Ukraine will allocate Hr 165.3 billion ($6.1 billion) to defense and security in 2018, according to the budget bill passed by the Verkhovna Rada on Dec. 7.
In comparison with 2017, when spending was Hr 129 billion ($4.9 billion), next year’s spending on the army, police and special services in Ukraine is 28 percent higher, and a new record-high amount.
The new defense budget is likely to rise beyond 6 percent of the nation’s nominal gross domestic product (GDP), which is forecast by the National Bank of Ukraine for 2017 to hit Hr 2.7 trillion ($100.1 billion).”
3. EU Foreign Policy chief defends Ukraine’s territorial integrity as EU weighs Russia sanctions extension

Radio Free Europe/Radio Liberty (RFE/RL) reported on December 8, “The European Union’s foreign policy chief reiterated the EU’s ‘unwavering’ support for Ukraine’s territorial integrity as the bloc considered moves to extend economic sanctions on Russia for its aggression in Ukraine.
Federica Mogherini, speaking in Brussels on December 8 after meeting with Ukrainian Prime Minister Volodymyr Groysman, condemned Russia’s continued militarization of the Crimea region, which Moscow annexed from Ukraine in 2014.
She also assailed Russia for the deterioration of human rights in the region and restated the EU’s ‘call for the immediate release of all Ukrainian citizens illegally detained in illegally annexed Crimea and in Russia.’
The EU, along with the United States, has imposed economic sanctions on Moscow for its actions in Ukraine […] The EU sanctions, which mainly target the Russian banking and energy sectors, were imposed in the summer of 2014 and have been extended every six months since then.
EU diplomats, speaking on condition of anonymity, told RFE/RL on the sidelines of the meeting that French President Emmanuel Macron and German Chancellor Angela Merkel will recommend at the December 14 EU summit that the sanctions be extended a further six months through July 2018.
The decision on sanctions will likely be made by EU diplomats just before the Christmas break, officials said.” Please click here for the JOINT STATEMENT by Federica Mogherini, High Representative of the Union for Foreign Affairs and Security Policy and Volodymyr Groysman, Prime Minister of Ukraine, following the 4th session of the EU-Ukraine Association Council
http://www.kmu.gov.ua/control/en/publish/article?art_id=250490620&cat_id=244314975
4. Saakashvili appears in Kyiv court
Former Odesa oblast governor Mikheil Saakashvili appeared in court today in Kyiv for a hearing on whether he should continue to be held in custody.
The Associated Press reported, “Saakashvili was arrested Friday on allegations that he colluded with Ukrainian businessmen tied to Russia to topple President Petro Poroshenko.  Saakashvili rejected the allegations and is refusing food to protest his detention. […]
About 200 of Saakashvili’s supporters scuffled with police outside the Pechersky District court that deliberated on whether to keep him in custody. […] It was unclear when the decision on custody would come.”
Saakashvili was detained Friday December 8 after fleeing law enforcement custody on December 5.
5. European Investment Bank supports extension and upgrade of Kharkiv metro

The European Investment Bank (EIB) The European Investment Bank (EIB) “is lending EUR 160m to finance improvements to the public transport system in Ukraine’s second largest city. EIB funds will support the extension of the Kharkiv metro network to a residential area with a high population density, making it more attractive for commuters.
The EIB loan will facilitate the shift away from an excessive car use to a more sustainable transport system with positive consequences on climate and the quality of the urban environment in the city. It will contribute upgrading public transport in the southern part of the city of Kharkiv, an area which is currently only served by trolleybuses, buses and mini buses,” the EIB reported today.

The Head of the EU Delegation in Ukraine Hugues Mingarelli stated, “Much needed new investment in Kharkiv metro will connect city’s business, universities and daily commuters via a modern and environment friendly transport link, which later could be extended to Kharkiv airport. I have no doubt that this project will also help build this city a stronger economy – something that we consider one of the key foundations of the EU-Ukraine partnership.”