Ukraine: Weekly Bulletin
December 23-29, 2017
1. Russian Invasion of Ukraine
The General Staff of Ukraine’s Armed Forces reported that during the week of December 22-28, three Ukrainian soldiers were killed and twelve Ukrainian soldiers were wounded in action on the eastern front. Throughout the week, Russian-terrorist forces opened fire 55 times on Ukrainian positions on the Luhansk, Donetsk and Mariupol sectors of the front, including at least 25 times with heavy weapons.
2. 73 Ukrainian hostages welcomed home – over 160 still held in Donbas, Crimea & Russia
The Kharkiv Human Rights Protection Group (KHPG) reported on December 28, “63-year-old Ihor Kozlovskyy and many other hostages whose insane ‘trials’ have been reported here are free at last, and returning to their families.
The joy and relief that this first exchange of prisoners in 15 months was really taking place was tinged with sadness for all those who remain imprisoned – at least 103 in the self-proclaimed ‘Donetsk and Luhansk people’s republics’ [DPR, LPR] and over 60 held in Russia and Russian-occupied Crimea. […]
The release of 74 Ukrainians prisoners of war and civilian hostages had been agreed, however one woman chose to remain behind, saying that although she held pro-Ukrainian views, her family was in Donetsk.
Although the Minsk Accords clearly states that there should be an all for all release of prisoners, not one exchange has ever been of equal numbers, and that on Dec 27 was no exception.  The Ukrainian government had agreed to release 306 people, however 29 refused to go to the Russian-backed ‘republics’ when already at the exchange point, while a further 40 who had been released from custody or imprisonment in anticipation of the exchange simply failed to turn up.  237 prisoners were therefore handed over.
Some of the PoW, whose relatives have campaigned for over the last year and more have been released, but some, like Glondar and Korinkov, who were captured by Russian soldiers or pro-Russian fighters at Debalseve, remain imprisoned.  So too does Stanislav Aseyev, the journalist and blogger seized by the so-called ‘DPR ministry of state security’ in June 2017.”
The full report from KHPG is available here
For a report from Hromadske on the return of the liberated Ukrainians to Kyiv, please see here:
Return home: How Ukrainians liberated from captivity were met in Kyiv (in Ukrainian)
3. US to provide Ukraine with defensive weapons, including anti-tank missiles
The Associated Press reported on December 23, “The Trump administration has approved a plan to provide lethal weapons to Ukraine, a long-awaited move. […]
The new arms include American-made Javelin anti-tank missiles, U.S. officials said lateFriday. […] The officials describing the plan weren’t authorized to discuss it publicly and demanded anonymity. […]
Trump had been considering the plan for some time after the State Department and the Pentagon signed off earlier this year. President Barack Obama also considered sending lethal weapons to Ukraine, but left office without doing so.
The State Department, responsible for overseeing foreign military sales, would not confirm that anti-tank missiles or other lethal weapons would be sent. But in a statement late Friday, State Department spokeswoman Heather Nauert said the U.S. had decided to provide ‘enhanced defensive capabilities’ to help Ukraine build its military long-term, defend its sovereignty and ‘deter further aggression.’
‘U.S. assistance is entirely defensive in nature, and as we have always said, Ukraine is a sovereign country and has a right to defend itself,’ Nauert said.
In thanking the U.S. for its support, Ukrainian President Petro Poroshenko addressed the concerns over how the weapons would be used.
‘American weapons in the hands of Ukrainian soldiers are not for an offensive, but for a decisive rebuff of the aggressor, the protection of Ukrainian soldiers and civilians, as well as for effective self-defense,’ he wrote on Facebook.”
US Senator John McCain (R-AZ), Chairman of the Senate Armed Services Committee, stated, “President Trump’s reported decision to provide Javelin anti-tank munitions to Ukraine marks another significant step in the right direction and sends a strong signal that the United States will stand by its allies and partners as they fight to defend their sovereignty and territorial integrity. This decision is years overdue. But as Vladimir Putin continues to sow instability in Ukraine and Russian-led forces escalate their deadly attacks, it could not come at a more important time.
Providing Ukraine the capabilities it needs to deter and defend against further Russian aggression will contribute to creating more stable security conditions that are necessary for a peaceful resolution of this conflict. In other words, as I have long argued, providing defensive lethal assistance to Ukraine is not opposed to a peace in Ukraine – it is essential to achieving it.”
4. Ukraine’s President signs healthcare reform legislation
Ukraine’s President Petro Poroshenko signed the law on financial guarantees for healthcare service on December 28, which introduces structural changes to Ukraine’s healthcare system. Ukraine’s acting Minister of Health Ulana Suprun stated, “Today is the result of the revolution of dignity in the health care system, which our team started a year ago. Together with everyone who supported change, we have done a lot of work – but there is more work ahead.”
Ukraine’s Parliament passed the health care reform legislation in October. The Ambassadors of the G7 countries to Ukraine stated in October, “This legislation is a significant step forward and is designed to ensure better healthcare provision for all Ukrainians, achieve efficient primary to tertiary health care, and eradicate corruption.”
5. Ukraine exports grow 20% in 2017
Ukraine’s Ministry of Economic Development and Trade reported that Ukraine’s exports for the first 10 months of 2017 grew 20.9% year-over-year, an increase of $6.7 billion in 2017 to $35.2 billion.
6. US Secretary of State: On Russia, we have no illusions about the regime we are dealing with 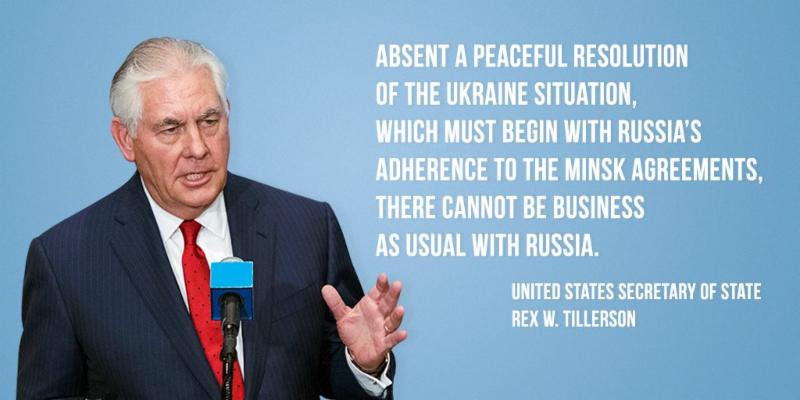 In an oped in the NY Times on December 27, US Secretary of State Rex Tillerson wrote, “On Russia, we have no illusions about the regime we are dealing with. The United States today has a poor relationship with a resurgent Russia that has invaded its neighbors Georgia and Ukraine in the last decade and undermined the sovereignty of Western nations by meddling in our election and others’. The appointment of Kurt Volker, a former NATO ambassador, as special representative for Ukraine reflects our commitment to restoring the country’s sovereignty and territorial integrity. Absent a peaceful resolution of the Ukraine situation, which must begin with Russia’s adherence to the Minsk agreements, there cannot be business as usual with Russia.”
0 Likes