1. Russian Invasion of Ukraine
The General Staff of Ukraine’s Armed Forces reported at 12:30 PM Kyiv time that in the last 24 hours, one Ukrainian soldier was killed in action. In the last 24 hours, Russian-terrorist forces opened fire on Ukrainian positions on the Luhansk and Donetsk sectors of the front 7 times in total, including 4 times with heavy weapons.
2. Canada’s Governor General, Ukraine’s President visit Canadian troops in Ukraine
Canada’s Governor General Julie Payette and Ukraine’s President Petro Poroshenko visited the National Army Academy at Yavoriv, where 200 Canadian Armed Forces personnel are training Ukrainian soldiers in Operation UNIFIER, Ukraine’s Presidential Administration reported.
Governor General Payette thanked the Canadian troops working in Ukraine. She stated, “Canada and Ukraine work side by side. […] I would like to express great respect and gratitude to you for serving your country – this is an enormous gift and an extremely important contribution to the security. You should be proud of your present and future achievements.”
President Poroshenko stated, “I am proud that our sworn brothers – Canadian servicemen stand in the ranks side by side with the Ukrainian warriors […] I cannot imagine a better proof of solidarity with Ukraine. And today you continue to build brotherhood in arms.”
3. Ukraine’s Parliament passes Donbas reintegration bill 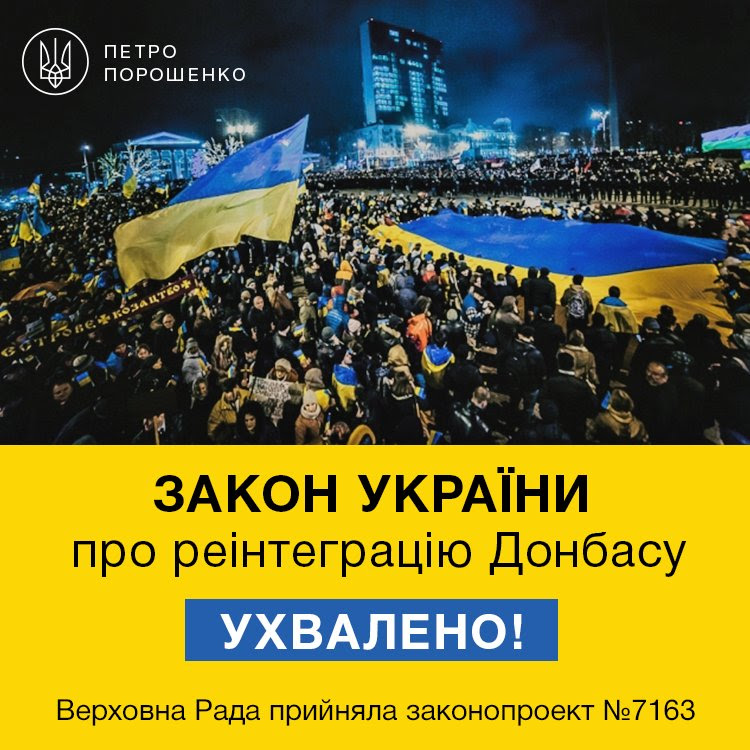 Ukraine’s Parliament passed a bill governing state policy towards areas in eastern Ukraine currently under Russian occupation. Among its provisions, the bill recognizes Russia as an aggressor state and the parts of Donetsk and Luhansk oblasts as temporarily-occupied territories. 280 MPs voted for the bill.
According to several reports, the bill puts legal responsibility on Russia for human rights and property violations, strengthening Ukraine’s legal cases against Russia in international courts and The Hague. Similar legislation was adopted by Ukraine’s Parliament in 2014 regarding Russian-occupied Crimea.
Ukraine’s President Petro Poroshenko welcomed the adoption of the legislation, stating that the bill is a “signal for Donbas and Crimea – you are an integral part of Ukraine!”
4. Ukraine’s Parliament adopts privatization law
Reuters reported, “Ukrainian lawmakers passed a law on Thursday aimed at making the privatisation of more than 3,000 mostly loss-making state companies faster and more transparent, a step needed for Kyiv to secure more aid from the International Monetary Fund. […]
It comes as Ukraine is seeking to reassure investors and foreign backers of its commitment to tackle corruption and modernise the economy. Billions of dollars worth of new IMF loans are held back due to Ukraine’s perceived backsliding.
‘The largest sector of corruption today is state-owned enterprises, which have been used for decades to create corrupt schemes,’ Prime Minister Volodymyr Groysman told parliament before the vote. ‘This law gives us the opportunity to create tens of thousands of jobs in the near future in Ukraine, create conditions for serious economic growth,’ he added.
The government estimates it will generate 21.5 billion hryvnia ($746.79 million) this year from selling state firms once the law is passed.
The law aims to make the privatisation process more transparent and faster for investors. It makes it obligatory, for example, to invite international advisers through a tender process to help prepare sales of larger firms.
The law will allow the state to sell assets at cheaper prices than the starting price of the auction.
If the first sale fails, the price can be cut by 25 percent, then by 50 percent if a second attempt fails, and finally, if the sale falls through a third time, the State Property Fund can hold consultations with potential investors about the price.”
0 Likes