Ukraine: Daily Briefing
January 23, 2018, 5 PM Kyiv time
1. Russian Invasion of Ukraine
The General Staff of Ukraine’s Armed Forces reported that in the last 24 hours, one Ukrainian soldier was killed in action. In the last 24 hours, Russian-terrorist forces opened fire on Ukrainian positions on the Luhansk and Donetsk sectors of the front 6 times in total, including 4 times with heavy weapons. 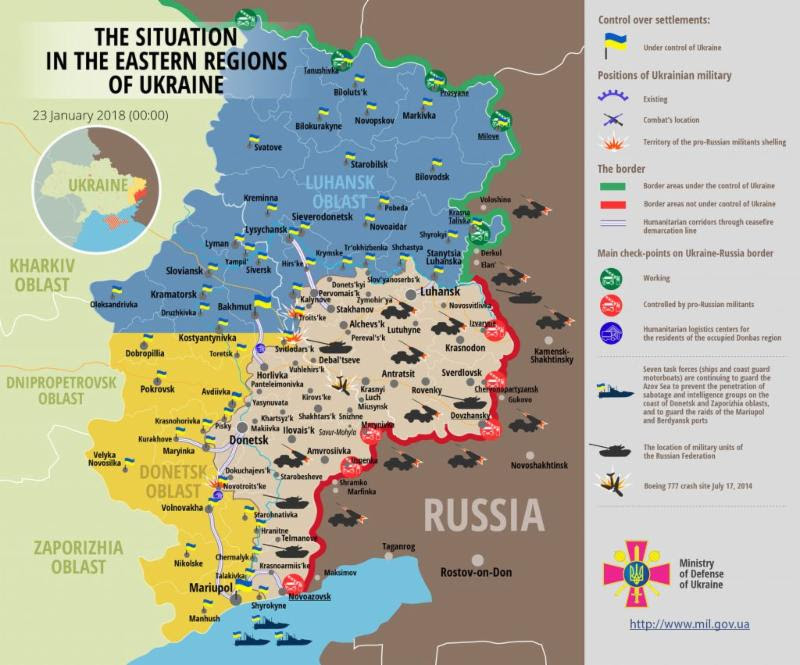 Voice of America (VOA) reported, “U.S. Special Envoy for Ukraine Kurt Volker says he is scheduled to hold a new round of talks with Russian presidential aide Vladislav Surkov in Dubai on Jan. 26.
Volker told VOA’s Ukrainian Service that he will arrive in eastern Ukraine on Wednesday and stop in Kyiv on Thursday, before heading to Dubai to discuss the war in eastern Ukraine and prospects for the introduction and possible format of the peacekeeping mission.
Ukrainian Foreign Minister Pavlo Klimkin, who confirmed the meeting at a Monday press conference, said he’s eager to see how talks go after Washington’s recent unveiling of new sanctions against Russia. […]
Volker called his last meeting with Surkov in Belgrade last November ‘a step back.'”
3. Canadian Forces donate winter boots for Ukrainian orphans during Operation UNIFIER
An article in the Maple Leaf, from Canada’s Department of National Defence, stated, “While the Canadian Armed Forces (CAF) members deployed on Operation UNIFIER have the primary task of providing military training, mentoring and capacity building for the Ukrainian Armed Forces, they have also been committed to reaching out to Ukrainian communities through humanitarian projects.
‘With the support of the Chain of Command, we have been assisting non-profit local organizations by means of voluntarily contributions, fundraising events, and by CAF members’ voluntary participation in day programs designed for disadvantaged children and young adults with mental disabilities,’ said Captain Humberto Lopes, Chaplain of Joint Task Force-Ukraine. He has led this project during the operation.
One of the new humanitarian initiatives of Operation UNIFIER was to offer support for Home for Children #1. This orphanage in Lviv, Ukraine houses fifty-five young children full-time, ranging from 2 to 6 years of age. After contacting the Home for Children director, it became clear that winter boots were one of the most pressing needs for the kids. That knowledge ignited the idea and initiative of Operation WARM FEET.
Op WARM FEET’s goal was to provide winter boots for every child at Home for Children #1; boots are an essential clothing item for harsh Ukrainian winters. The idea was well received by Op UNIFIER members, who contributed generously to the initiative.
‘The contributions and fundraising initiatives were so successful that we surpassed our monetary expectations, and therefore we were also able to offer our assistance to another orphanage in Kamianets-Podilskyi looking for help to provide gloves and winter hats for twenty-two children,’ said Captain Lopes.
The success of Op WARM FEET clearly demonstrated the generosity and support of Canadian soldiers to Ukrainian society. Each visit at the orphanage enriched their experience in Ukraine as they embraced a simple but significant cause in a very tangible way. They provided a caring human presence and the resources to purchase winter boots for the children.
Perhaps the best part of Op WARM FEET was the thank you: the children hugged the troops and sang songs. Indeed this was the best part of the day, and the best gifts Op UNIFIER members could have received.”
4. Reuters report: US sanctions curb Microsoft sales to hundreds of Russian firms
Reuters reported on January 22, “Two of Microsoft’s official distributors in Russia have imposed restrictions on sales of Microsoft software to more than 200 Russian companies following new U.S. sanctions, according to notifications circulated by the distributors.
While much of the focus around U.S. sanctions has been on ways they are being skirted, the moves by the Russian distributors show how tougher restrictions that came into force on Nov. 28 are starting to bite.
The new measures cut the duration of loans that can be offered to Russian financial firms subject to sanctions to 14 days from 30 days and to 60 days from 90 days for Russian energy companies on a U.S. sanctions list.
Previously, the restrictions had mainly affected Western banks lending to Russian firms but with such short financing periods, swathes of companies supplying goods and services to Russian clients fear they could fall foul of the rules too. It is routine in Russia for suppliers to wait weeks or even months to get paid after submitting invoices for goods and services.
Some Western firms have been advised by lawyers that the U.S. Treasury Department could, in theory, take the view this constituted financing in violation of the sanctions, according to several people involved in the discussions.
One of the two Microsoft distributors, a Russian company called Merlion, said in its notification to partners that all sanctioned buyers of Microsoft licenses must pay within tight deadlines, or even pay upfront in some cases. The second distributor, RRC, said in its notification, seen by Reuters, that ‘serious restrictions are being introduced’ on Microsoft orders from firms subject to U.S. sanctions.
Both Merlion and RRC cited rules stemming from the new package of U.S. sanctions – signed into law on Aug. 2 for Russia’s involvement in Ukraine and cyber attacks – as the reason for the additional restrictions. […] The United States can impose a civil penalty on violators of $250,000 or double the amount of the offending transaction if it is greater. If convicted of wilful violation, offenders face a fine up to $1 million, or 20 years in jail, or both. […]
Reuters reported in October that software produced by Microsoft had been acquired by state organizations and firms in Russia and Crimea, despite sanctions barring U.S.-based companies from doing business with them. That case, and several similar ones reported by Reuters, highlighted gaps between the sanctions and their enforcement.”
0 Likes