Ukraine: Daily Briefing
February 1, 2018, 5 PM Kyiv time
1. Russian Invasion of Ukraine
The General Staff of Ukraine’s Armed Forces reported at 12:30 PM Kyiv time that in the last 24 hours, one Ukrainian soldier was killed and two Ukrainian soldiers were wounded in action. Russian-terrorist forces shelled residential areas of Krymske (towards Luhansk) with mortars. No civilians were injured. In the last 24 hours, Russian-terrorist forces opened fire on Ukrainian positions on the Donetsk and Luhansk sectors of the front 5 times in total. 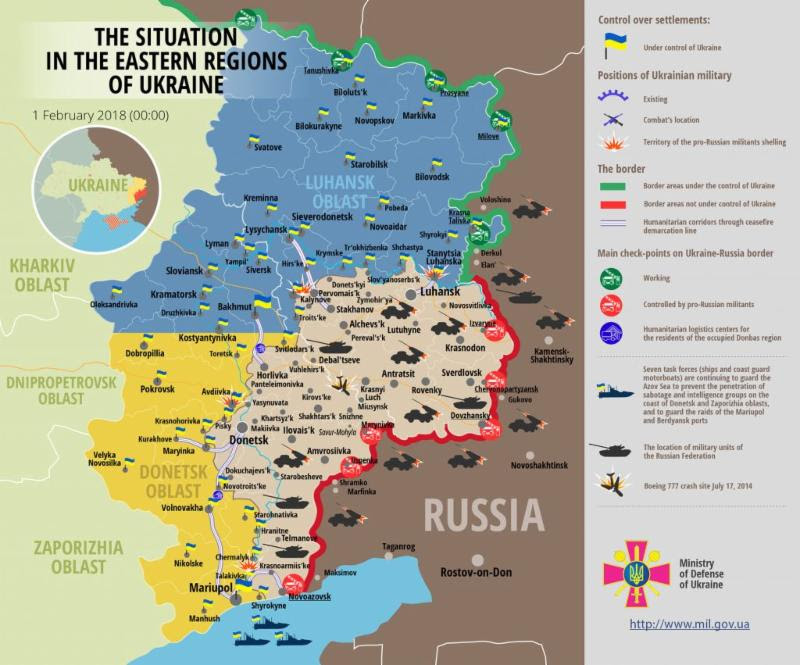 Ukraine’s Cabinet of Ministers has developed a package of 35 bills aimed at accelerating economic growth. The Cabinet reported that the bills focus on 5 main priorities – business protection, deregulation and improvement of the business environment, facilitating access to financial and public resources, promotion of innovation.
At a meeting of the Cabinet, Ukraine’s Prime Minister Volodymyr Grosyman “emphasized the elaborated package of documents encompasses several principal directions, in particular, transparent access to resources, deregulation, ease of doing business, business law protection, access to finance, and encouragement of innovation.”
Groysman stated, “We are focusing on laying the foundations for rapid economic upturn. We project an increase by 3%. But this is not enough, hence we need to create conditions that will allow us to move towards a new growth. It will be at least 5-7%. We single out this task as a medium-term perspective.”
3. Ukrainian ground launched cruise missile passes first flying tests
Ukroboronprom, Ukraine’s state defense enterprise, reported, “The first flying tests of the new Ukrainian ground-launched cruise missile (GLCM), which can accurately hit ground and naval targets, are carried out successfully. Flight characteristics and operation of the missile systems were checked. […]
A new development completed by designers of UKROBORONPROM enterprise State Kyiv Design Bureau ‘Luch’ is developed in cooperation with other state and private defense enterprises of Ukraine.”
Oleskandr Turchynov, Secretary of Ukraine’s National Security and Defense Council, stated, “Today’s tests have opened a new stage of the missile program, according to which our Armed Forces are to receive powerful high-performance cruise missiles that can accurately strike hostile targets at great distances.”
4. US Mission to the OSCE on Russia’s ongoing violations in Ukraine 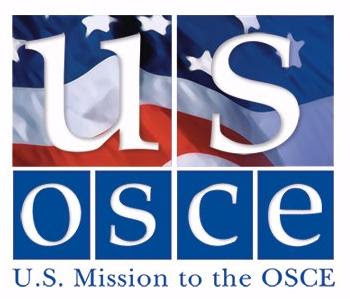 Speaking at a meeting of the OSCE Permanent Council, US Deputy Chief of Mission Michele Siders stated, “Nearly four years ago Russia began its intervention into the affairs of a sovereign state, Ukraine, just as it did in Georgia during 2008. The result of Russia’s aggression is the ongoing conflict that has cost the lives of over 10,000 Ukrainians. And while there exists an agreed upon path to peace, progress on that path seems scant […]
The United States also remains concerned about those brave enough to speak out against Russia’s occupation of Crimea. Crimean Tatar activists, many of whom were transferred to Russia for incarceration, suffer in poor conditions. A lawyer speaking on behalf of Crimean Tatar activist Emir-Hussein Kuku, who is imprisoned in Rostov-on-Don, said that there are 17 prisoners sharing eight beds, who must sleep in shifts. We have not forgotten – indeed, the world has not forgotten – Oleh Sentsov, Oleksandr Kolchenko, Oleksandr Kostenko, Ruslan Zeytullayev, and the other Crimeans serving sentences in Russian prisons in retaliation for their opposition to Russia’s occupation. We again call on Russia to release them.
Russian occupation authorities continue to harass and persecute Crimean Tatar activists with impunity, in what Human Rights Watch terms a “black hole for human rights.” […]
Colleagues, each week in this Council, we hear from the Russian Federation that this conflict is tantamount to a so-called Ukrainian ‘civil war.’ We all know the truth – the brutal war in Donbas is fomented and perpetuated by Russia. If Russia truly wants a peaceful resolution of this conflict, it will stop undercutting Ukraine’s sovereignty and territorial integrity. Only Russia’s actions – not its rhetoric – will demonstrate its commitment to a peaceful resolution based on the Minsk agreements.
In closing, let me reiterate that the United States fully supports Ukraine’s sovereignty, independence, and territorial integrity within its internationally-recognized borders. We seek the safety and security of all Ukrainians, regardless of language, religion or ethnicity.
We do not, nor will we ever, recognize Russia’s occupation and purported annexation of Crimea. Crimea-related sanctions on Russia will remain in place until Russia returns full control of the peninsula to Ukraine. And we join our European and other partners in restating that our sanctions against Russia for its aggression in eastern Ukraine will remain until Russia fully implements its commitments under the Minsk agreements.”
0 Likes