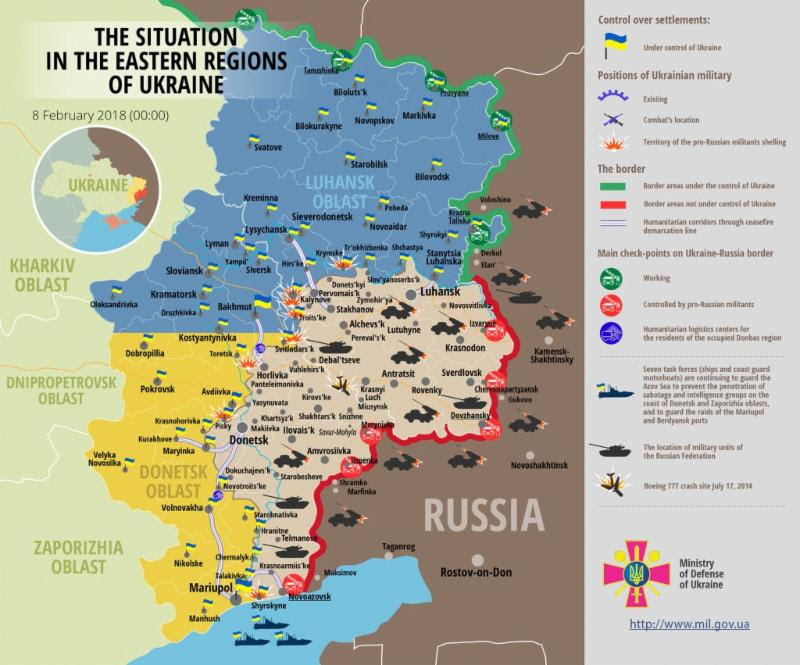 2. Ukraine, Canada, World Bank to cooperate on implementation of telemedicine in Ukraine

On February 7, Ukraine’s Ministry of Health, Ministry of Regional Development, Canada’s Department of Global Affairs, and the World Bank signed a Memorandum of Cooperation on regarding increasing the availability and quality of healthcare services in rural areas, Ukraine’s Presidential Administration reported.
Ukraine’s acting Minister of Health Dr. Ulana Suprun stated, “In order to fully guarantee access to quality healthcare services for all Ukrainians, we have to help those who live in rural areas.”
Ukraine’s Ministry of Health announced that on February 9, the Ministry of Health of Ukraine and the Government of Ontario will sign a Memorandum of Understanding regarding cooperation on health care programs.
3. Ukrainian political prisoner Volodymyr Balukh turns 47 in prison in Russian-occupied Crimea

The Kharkiv Human Rights Protection Group (KHPG) reported, “Volodymyr Balukh turns 47 on February 8, and will be spending his second birthday imprisoned in occupied Crimea, effectively for a Ukrainian flag.  His elderly mother, who is nearly blind and walks with difficulty, has been left entirely alone to tend their farm, after two ‘trials’ on flagrantly trumped up charges.
In Kyiv, two Crimean Tatar leaders Akhtem Chiygoz and Ilmi Umerov, who were themselves imprisoned and / or persecuted under Russian occupation, will be joining many other Ukrainians for an evening in solidarity with the courageous Crimean.
For those who cannot be present, there is an important way of showing solidarity with Volodymyr and all those in Crimea who refuse to be silenced and peacefully oppose Russian occupation.
A petition was launched on Ukrainian Unity Day (22 January) calling on President Petro Poroshenko to declare Volodymyr Balukh a Hero of Ukraine.  It is endorsed by Archbishop Kliment, the Head of the Ukrainian Orthodox Church under the Kyiv Patriarchate in Crimea, and prominent human rights groups.
They point out that even despite mounting persecution and repressive measures against all those who refuse to buckle under, the spirit of resistance to the occupation regime remains strong.  It is people like Balukh, unwaveringly true to Ukraine, that give the lie to Russian propaganda about Crimea and give hope that it will return under Ukraine’s control.
Russia is holding at very least 64 Ukrainians, most Crimeans, prisoner on politically motivated charges or for their faith.  That number is rising all the time, and the persecution will only be stopped, and prisoners released, if there is political pressure from western governments.  There is a real opportunity for such pressure on the Kremlin in the run-up to Russian President Vladimir Putin’s pretence of standing for ‘re-election’ and to Russia’s hosting of the World Cup.
Please help inform politicians and the media in your country of the extraordinarily cynical prosecution of a Crimean farmer, who refused to remove his Ukrainian flag and the sign he erected on his home to honour slain Euromaidan activists.”
The full report from KHPG is available here
4. IMF mission to arrive in Kyiv February 12
Ukraine Business Journal reported, “An IMF team will arrive in Kyiv on Monday to spend the week consulting with Ukrainian authorities, according to Goesta Ljungman, IMF Resident Representative here. Almost three years ago, the IMF approved for Ukraine a four-year Extended Fund Facility worth $17.5 billion. Since then Ukraine has received almost half — $8.4 billion.”
5. US Mission to OSCE: Responsibility for re-establishing peace in eastern Ukraine rests squarely with Russia

The US Mission to the OSCE stated, “The Russian Federation still refuses to take responsibility for its role in the conflict, despite the crushing weight of evidence that it arms, trains, leads, and fights alongside anti-government forces in eastern Ukraine.
When Moscow signed the Minsk agreements we hoped Russia would abide by its commitments and take the necessary steps to end the bloodshed in the Donbas. What is clear after 40 recommitments to the ceasefire, however, is that Russia can rein in its forces whenever it chooses. We hear stale points about how Ukraine is on the brink of civil war and this is an internal conflict.
Again, let me underscore: the starting point for a peaceful outcome in this conflict is Russian action in implementing a cease fire, disengagement of forces, and the cantonment of weapons proscribed by the Minsk agreements. […]
Responsibility for re-establishing peace in eastern Ukraine rests squarely with the Russian Federation. […] We wait for Russia to deliver on its commitments. […]
The United States again calls upon Russia to end its campaign of repression in occupied Crimea, and return control of Crimea to Ukraine. The United States is resolute in its support for Ukraine’s sovereignty, independence, unity, and territorial integrity within its internationally-recognized borders.

We do not, nor will we ever, recognize Russia’s purported annexation of Crimea. Crimea-related sanctions on Russia will remain in place until Russia returns full control of the peninsula to Ukraine. And we join our European and other partners in restating that our sanctions against Russia for its aggression in eastern Ukraine will remain until Russia fully implements its commitments under the Minsk agreements.”