Honouring the Heroes of the Heavenly Hundred20 February 2018Next

Ukraine: Daily Briefing
February 20, 2018, 5 PM Kyiv time
1. Russian Invasion of Ukraine
The General Staff of Ukraine’s Armed Forces reported at 12:30 PM Kyiv time that in the last 24 hours, one Ukrainian soldier was killed and four Ukrainian soldiers were wounded in action. In the last 24 hours, Russian-terrorist forces opened fire on Ukrainian positions on the Donetsk and Luhansk sectors of the front 12 times in total, including at least 6 times with heavy weapons. 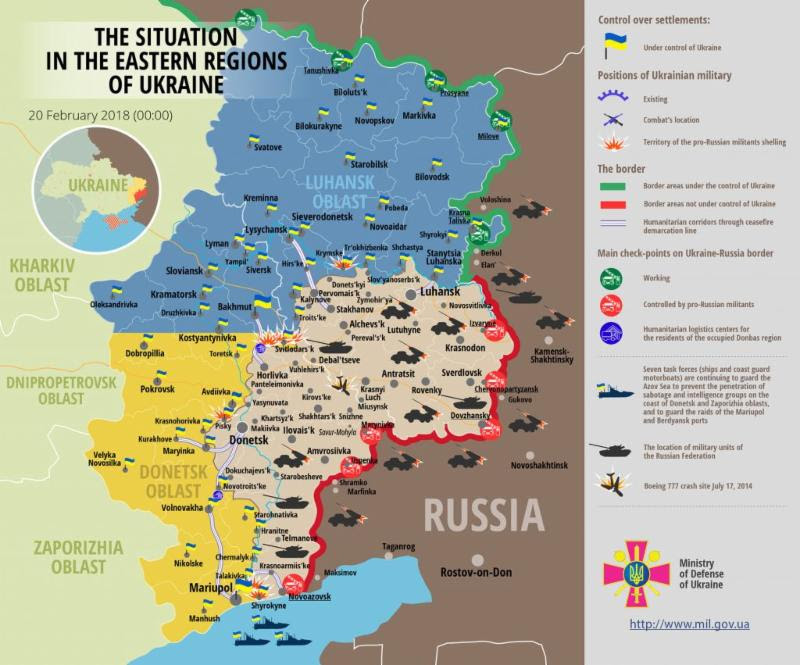 2. Ukraine’s President and First Lady take part in prayer for the fallen Heroes of the Heavenly Hundred 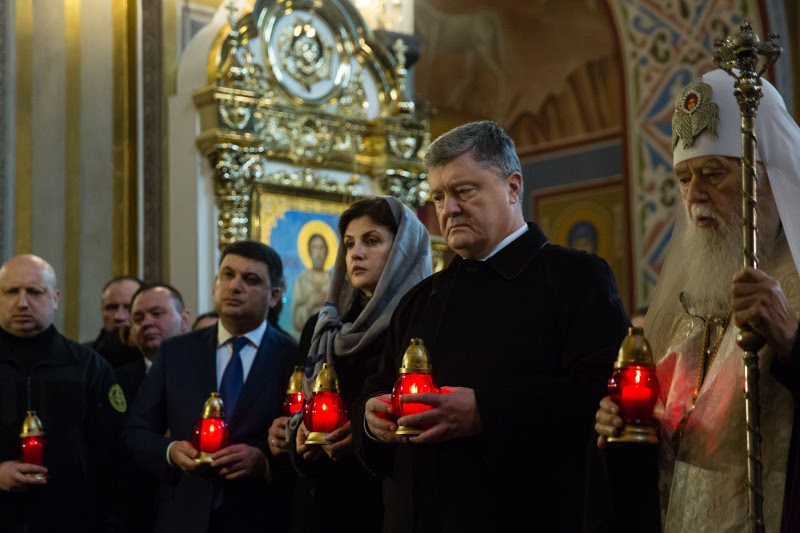 Ukraine’s Presidential Administration reported, “President Petro Poroshenko and his wife Maryna Poroshenko took part in the prayer for the fallen participants of the Revolution of Dignity. The prayer in St. Michael’s Cathedral was conducted by His Holiness, Patriarch of Kyiv and All Rus’-Ukraine Filaret.
The Patriarch noted that the prayer is for the best Ukrainians who gave life for the freedom of Ukraine. ‘As long as Ukraine has such brave sons and daughters, Ukraine is invincible. The enemy should know that as well,’ Filaret said. According to him, the duty of all Ukrainians is to remember the feat of the Heavenly Hundred Heroes, pray for them and remember that life doesn’t stop with death. ‘Death is not a defeat. Death is often a victory, as in this case,’ he stressed.
Upon completion of the memorial service, Petro and Maryna Poroshenko set icon lamps to the photos of the Heroes of the Heavenly Hundred.
In the morning, the presidential couple also put icon lamps to the Cross on the Alley of the Heavenly Hundred Heroes to commemorate the fallen participants of the Revolution of Dignity.”
3. US State Department on Fourth Anniversary of Ukraine’s Revolution of Dignity
The US State Department stated, “Four years ago, Ukrainians from all walks of life and all regions of the country came together on the Maydan, Kyiv’s central square, to demand their government recognize the choice of the citizens of Ukraine to join Europe. Scores of Ukrainians-the ‘Heavenly Hundred’ -gave their lives on the Maydan for the dream of a better Ukraine. The United States will continue to stand by Ukraine as it faces ongoing Russian aggression, which has claimed over 10,000 lives and displaced more than 1.6 million Ukrainians.
Ukraine has taken important steps over the past four years, yet there is still more work needed to fulfill the promise of the Maydan and unlock Ukraine’s potential. The United States calls on Ukraine’s leaders to redouble their efforts to implement the deep, comprehensive and timely reforms that are necessary to build the stable, democratic, prosperous, and free country Ukrainians deserve. We are proud to work with the people of Ukraine to honor the sacrifices made four years ago for Ukraine’s European choice.”
4. Ukraine’s President meets with US Secretary of Defense

Ukraine’s Presidential Administration reported on February 17, “In the framework of the Munich Security Conference, President of Ukraine Petro Poroshenko met with U.S. Secretary of Defense Jim Mattis. Petro Poroshenko expressed gratitude for the firm position of the U.S. in support of Ukraine’s sovereignty and territorial integrity. […]
The two sides discussed the situation in the Donbas and expressed their concern over the ongoing attempts of Russia and its supporters to undermine the peace process. They also discussed the need to deploy a United Nations peacekeeping mission in the Donbas in accordance with the UN principles and the goals of the Minsk process.
The Head of State expressed appreciation for Washington’s important decisions on strengthening the capabilities of the Armed Forces of Ukraine and Ukraine’s defense capability. Washington’s latest decisions are a signal against any intentional escalation of the situation in the Donbas, which, due to Ukraine’s new defensive capabilities, will increase the price of such an aggression.
Jim Mattis reaffirmed commitment of the United States to restore Ukraine’s sovereignty and territorial integrity, and noted a significant progress made by Ukraine in reforming the security and defense field.
The parties discussed further steps to strengthen Ukraine’s defense capability and noted the priority of the development of strategic partnership between Kyiv and Washington. U.S. Special Envoy for Ukraine Kurt Volker also attended the meeting.”
5. IMF calls for expeditious consideration of draft law on anticorruption court
Ukraine Business Journal reported, “After an IMF team spent last week [in Ukraine], Resident Representative Goesta Ljungman released a statement Monday: ‘It is now important that the authorities move expeditiously with parliamentary consideration of the draft law on the anticorruption court, while ensuring that the necessary amendments are adopted during the parliamentary process to make the approved law fully consistent with program commitments and the recommendations of the Venice Commission of the Council of Europe.'”
0 Likes