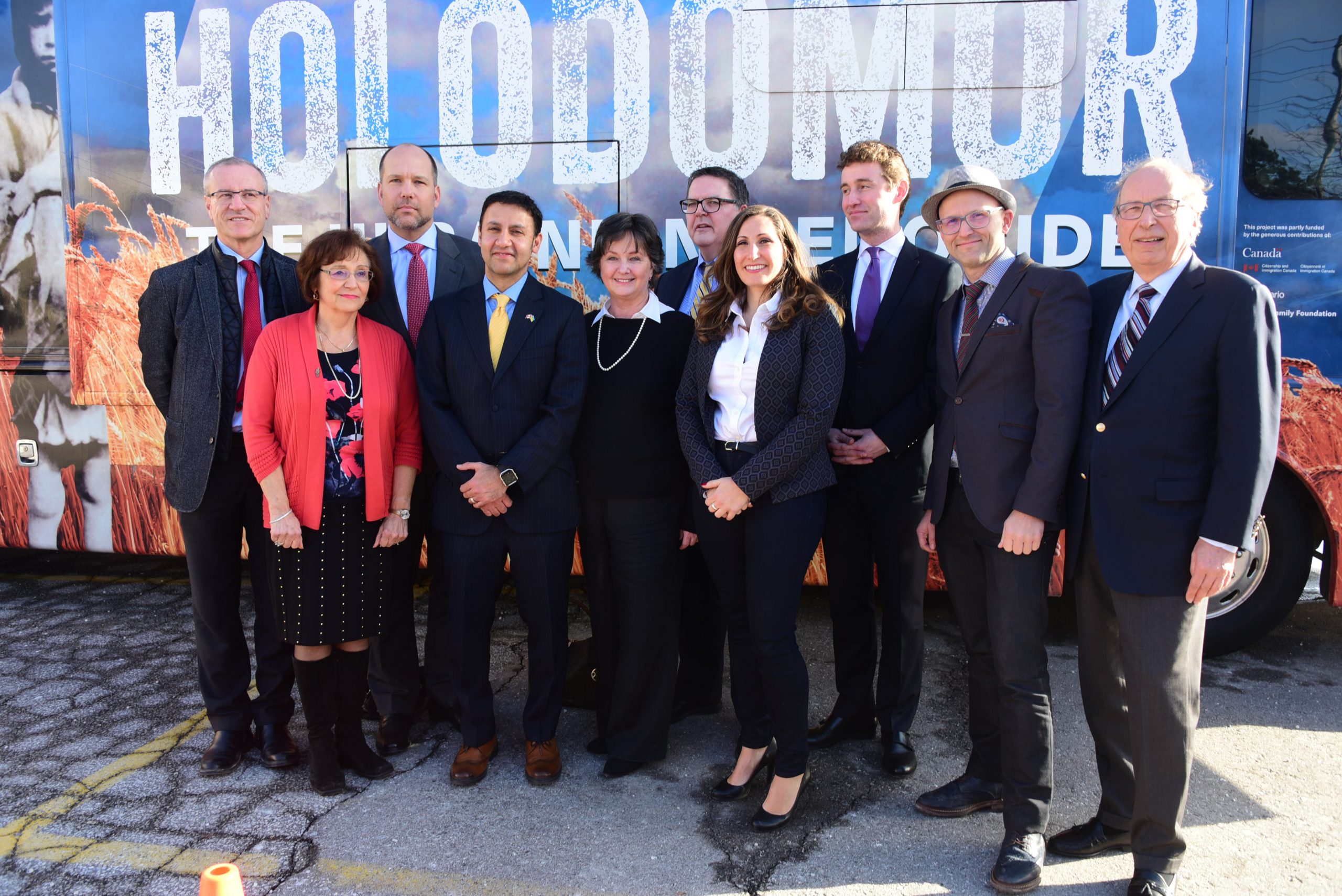 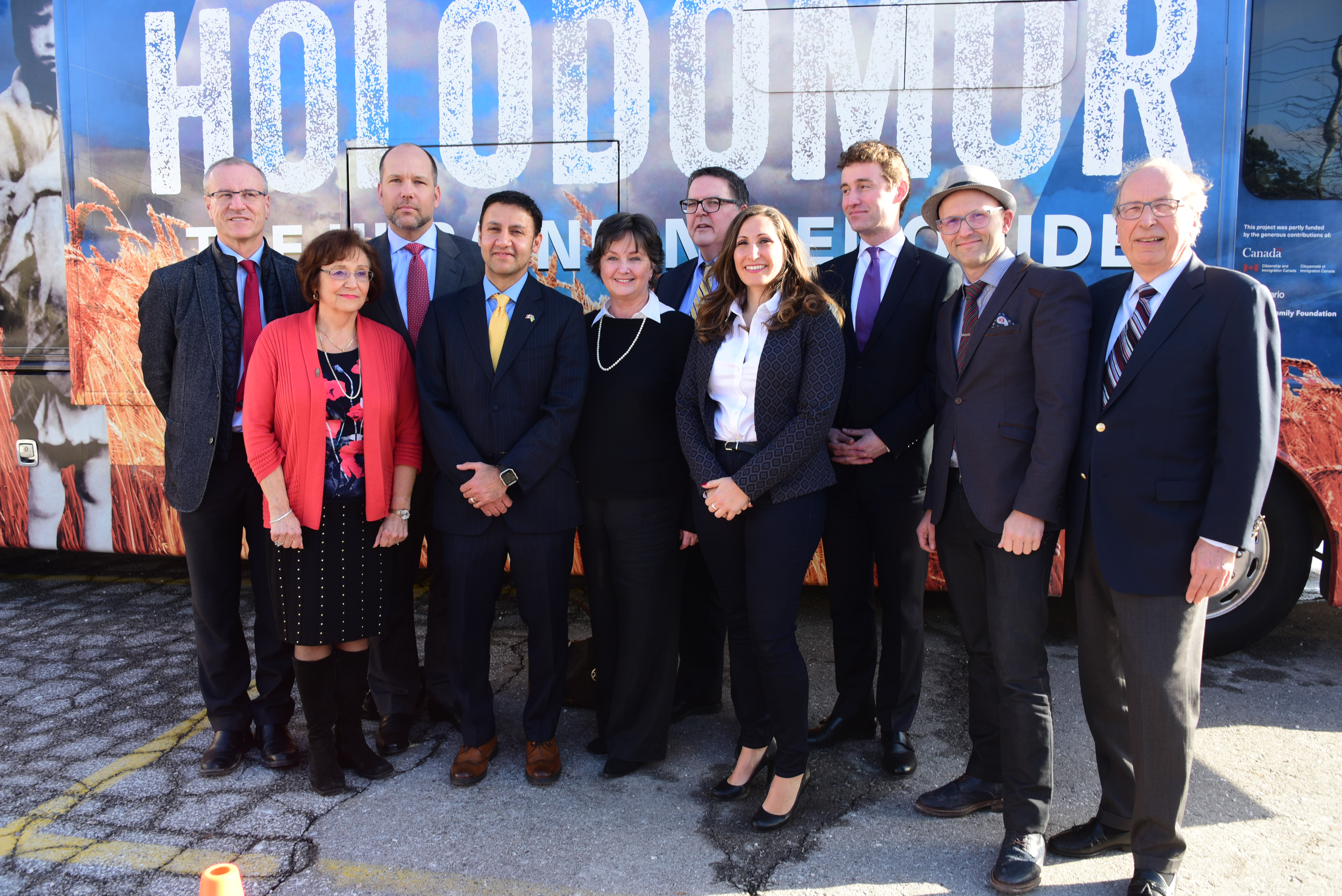 February 22, 2018
Toronto – The Ukrainian Canadian community welcomes the announcement by the Honourable Mélanie Joly, Minister of Canadian Heritage, of a three-year grant valued at $1.45 million to support the Holodomor National Awareness Tour and the Holodomor Mobile Classroom (“the HMC”).  The funding announcement was made today in Toronto by Arif Virani (MP, Parkdale – High Park), Parliamentary Secretary for Multiculturalism to the Minister of Canadian Heritage, the Honourable Mélanie Joly.
The HMC is a state-of-the-art interactive audio-visual learning centre geared to high schools, universities and the public (see attached fact sheet). The Tour and the HMC educates Canadian students, community leaders and the public about the events of the horrific Holodomor Famine-Genocide in Ukraine 1932-33, and its relevance to the world today.  Since its launch in 2015, the HMC has toured Canada from coast to coast.  Over 25,000 people including more than 18,000 students and educators have visited the HMC, learning about the values of multiculturalism, diversity, human rights and respect for human dignity.
The “Holodomor National Awareness Tour”, is a joint project between four organizations: the Canada Ukraine Foundation (CUF, the lead on the project), the Ukrainian Canadian Congress (UCC), the Ukrainian Canadian Research and Documentation Centre (UCRDC) and the Holodomor Research and Educational Consortium (HREC). For a fact sheet on the Holodomor National Awareness Tour, please see here
“This project was originally conceived to build bridges among communities to promote intercultural understanding, tolerance, awareness and a deeper respect for the democratic values that we Canadians hold so dear,” said Bob Onyschuk, Q.C., Past Chair of CUF, and Project Lead. “We have done just that, and are delighted that the Government of Canada has honoured the success of this project by agreeing to renew it for a further 3 years. We are also very proud that the HMC was recognized in 2017 by the international A’ Design Awards Competition (Como, Italy) with a coveted Gold A’ Design Award in the Education and Training Content category for Best “Immersive Learning Experience” – and we plan to put the HMC to this hi-tech creative use for the next 3 years.” 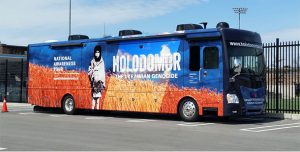 “We are grateful to the Government of Canada for its strong support for Holodomor education, which will teach Canadians of our shared responsibility to stand up to tyranny, oppression and crimes against humanity around the world,” said Paul Grod, National President of the Ukrainian Canadian Congress.  “This year, we commemorate the 85th anniversary of the Holodomor.  We honour the millions of victims of the Holodomor and pay tribute to the survivors, whose courage in sharing their story ensured that the terrible Genocide did not remain hidden from the world.”
Funding for Holodomor National Awareness Tour has also been generously provided by the following:
ADDITIONAL QUOTES
“This systemic and horrific genocide, undertaken by a totalitarian Soviet regime, killed millions of Ukrainian men, women, and children by starvation. It was a failed attempt to destroy the identity and will of the Ukrainian people.
“We stand with the victims of the Holodomor and their descendants to remember and condemn this unconscionable act. Remembering history is our best hope against repeating it.
Right Honourable Justin Trudeau, Prime Minister of Canada,
November 25, 2017 Holodomor Memorial Day statement
“Canada’s diversity is a strength and a source of great pride. Our government is proud to support projects like the Holodomor National Awareness Tour, which helps educate the public about the horrors one of the darkest chapters in human history: the Ukrainian Holodomor. I would like to thank the Canada-Ukraine Foundation and the Ukrainian Canadian community as a whole for their leadership in promoting intercultural dialogue and helping build a more inclusive Canada.”
-The Honourable Mélanie Joly, Minister of Canadian Heritage
“The Holodomor National Awareness Tour 2017-2020 is a wonderful opportunity to engage communities and schools across the country about the Holodomor. The state-imposed famine that resulted in the deaths of millions of Ukrainians from 1932-1933 is critical for Canadians of all backgrounds to learn about.  Our government is proud to invest in essential projects like this one that teach youth about the importance of diversity and combatting intolerance-work that will prevent tragedies like the Holodomor from happening again. The Holodomor Bus and National Awareness Tour is a terrific example of how Ukrainian Canadians are encouraging positive interactions between all cultural, religious and ethnic communities in Canada.”
-Arif Virani, Parliamentary Secretary to the Minister of Canadian Heritage (Multiculturalism) and Member of Parliament (Parkdale-High Park)
To learn more about the Tour and the HMC, you may go to the Tour’s web-site at
www.holodomortour.ca, or its Facebook page or Twitter account.
For the news release from the Government of Canada on today’s announcement, please see here
For a full gallery, see here
For more information please contact:
Holodomor Mobile Classroom:
Bohdan Onyschuk, Q.C.
E-Mail: bonyschuk@cufoundation.ca
Phone: 416-561-3453
0 Likes