Ukraine: Daily Briefing
March 5, 2018, 5 PM Kyiv time
1. Russian Invasion of Ukraine
The General Staff of Ukraine’s Armed Forces reported at 12:30 PM Kyiv time that in the last 24 hours, no Ukrainian soldiers were killed or wounded in action. In the last 24 hours, Russian-terrorist forces opened fire on Ukrainian positions 7 times in total, including 5 times with heavy weapons – mortars and tanks. 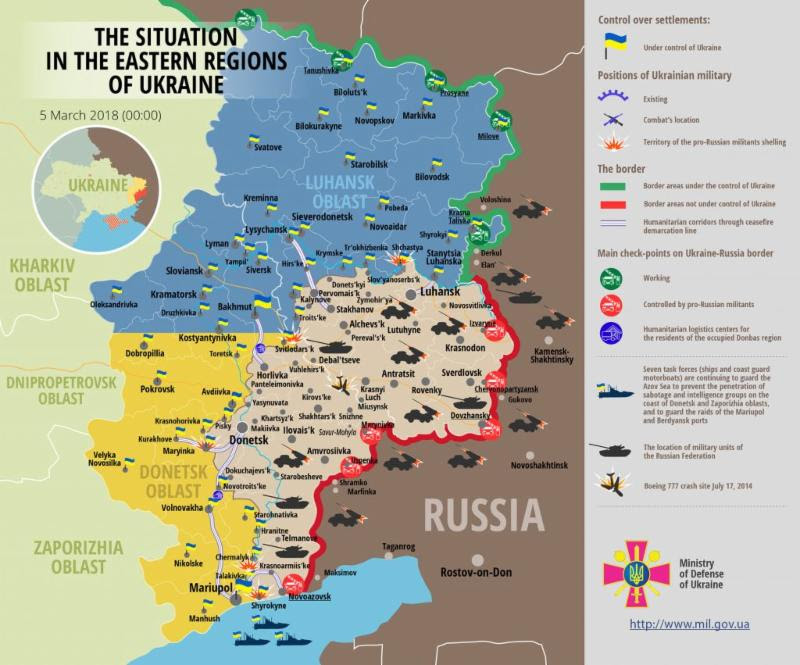 2. Russia’s gas blackmail against Ukraine fails and serves as EU alarm call
Naftogaz Ukrainy stated on March 3, “Ukraine’s gas transmission system (GTS) was fully functional on the morning of 3 March after emergency measures taken by Ukraine and the country’s European partners helped to cancel out the potentially disastrous effects of a Russian failure to supply prepaid gas.
Additional gas imports from the EU have allowed Ukraine to compensate for the shortfall in trunk pipeline pressure caused by Gazprom’s sudden and unilateral violation of the gas supply and transit contracts with Naftogaz.
Ukrainian society also played a key role in helping the country to avoid an energy crisis, with citizens responding to calls from the Ukrainian authorities to join the #coolitdown initiative and turn their residential heating down by one degree.
Coupled with security of supply measures implemented in commercial segment this led to a reduction of demand in Ukraine’s major cities by 14% on 2 March compared to the previous day. […]
The Naftogaz CEO singled out Ukrainian society for particular praise. ‘I would like to extend special thanks to Ukrainian society as a whole for the incredible levels of engagement displayed in support of our emergency initiative to turn down residential heating by one degree. This was an unprecedented national initiative made possible by popular participation and the support of the Ukrainian media. We now ask you to continue this initiative until 6 March. Each cubic meter of gas you save helps to defend Ukraine against the threat posed by Russia’s unpredictable behavior.’ […]
Initial international reaction to the gas showdown suggests Russia’s actions and statements made by Gazprom CEO Alexey Miller have seriously undermined Gazprom’s image within the EU as a reliable partner. According to numerous Western commentaries, Gazprom’s position is not in line with the spirit and practice of civilized commercial relations between suppliers and customers. This apparently overt use of gas supplies as a political weapon will likely provoke renewed debate in Germany over the wisdom of Berlin’s support for the Kremlin’s Nord Stream 2 pipeline project.
According to Naftogaz chief commercial officer Yuriy Vitrenko, Gazprom’s latest actions confirm that Naftogaz was correct to warn the European community over Russia’s use of gas supplies as a geopolitical weapon. ‘We hope that now it is more clear to the EU that it is a bad idea to build Nord Stream 2 or any other new streams with Gazprom,’ said Yuriy Vitrenko.”
3. Ukraine’s President: Russia failed to destabilize Ukraine’s energy sector

Ukraine’s Presidential Administration reported on March 3, “President Poroshenko stressed that Russia had failed to provoke our country and destabilize the energy sector. Ukraine demonstrated to the whole world its credibility as a partner and country transiting natural gas to the European Union. […]
‘Russians laid hopes that Ukraine would start taking gas from its transit volumes. Keep dreaming. Ukraine is a reliable state, reliable partner. We informed all our partners from the EU. They were ready and well-informed not to give in to Russian provocations. The reaction of the European Commission, certain EU countries clearly demonstrates support for Ukraine,’ the Head of State noted.
‘We fully ensured gas transit to the EU countries,’ he emphasized.
The President noted: ‘It is another evidence that Russia is not a reliable supplier. Why should you build the Turkish Stream of the Nord Stream 2 if Russia can cut off the supply of gas to the whole EU at any time, without any warning in order to ensure political pressure?'”
4. US Mission to OSCE: Four years of Russia’s illegal occupation of Crimea

The US Mission to the OSCE stated on March 1, “Four years ago this week, Russian troops in unmarked uniforms seized the parliament building in Simferopol at gunpoint. Just three weeks later Moscow staged an illegitimate and illegal referendum in Crimea. During the entire operation, Russia engaged in a campaign of lies designed to distort and distract from its attempt to illegally seize and then annex Ukrainian territory, using this and other fora to spread its falsehoods. […]
In the past four years, Russia has embarked on a path of coercion and violence to maintain its illegitimate control by targeting for repression anyone opposed to Russia’s occupation or attempted annexation of Crimea. The United States is also deeply concerned about the growing number of Ukrainian citizens in Russia-occupied Crimea who are illegally conscripted into Russian military service, with some having been deployed to external conflicts, including the conflict in Syria.
We here at the Hofburg and on the ground in Ukraine know the truth – Crimea is Ukraine. Our position is clear: The United States will not acquiesce to Russian rule of occupied Crimea. As U.S. Secretary of State Tillerson said at the Ministerial Council in December: ‘We will never accept Russia’s occupation and attempted annexation of Crimea. Crimea-related sanctions will remain in place until Russia returns full control of the peninsula to Ukraine.’ […]
We have drawn attention to egregious practices that Russian security forces have reportedly committed or condoned, including extrajudicial killings, kidnappings, raids, disappearances, arbitrary detention, physical abuse, torture, deportation, harassment, forced psychiatric hospitalization, and politically-motivated prosecution, among other coercive practices. […]
Russia’s egregious abuses and violations of Ukraine’s sovereignty and territorial integrity are an assault on the citizens of Ukraine, and on our global order. Russia’s attempted annexation of Crimea and its policy of repression to enforce its occupation are a rejection of the foundations of over 70 years of our post-war international order.”
0 Likes