1. Russian Invasion of Ukraine
The General Staff of Ukraine’s Armed Forces reported at 12:30 PM Kyiv time that in the last 24 hours, no Ukrainian soldiers were killed or wounded in action. In the last 24 hours, Russian-terrorist forces opened fire on Ukrainian positions on the Luhansk and Donetsk sectors of the front 20 times in total.
2. Ukrainian political prisoner Volodymyr Balukh, illegally imprisoned in Russian-occupied Crimea, resists pressure to end hunger strike 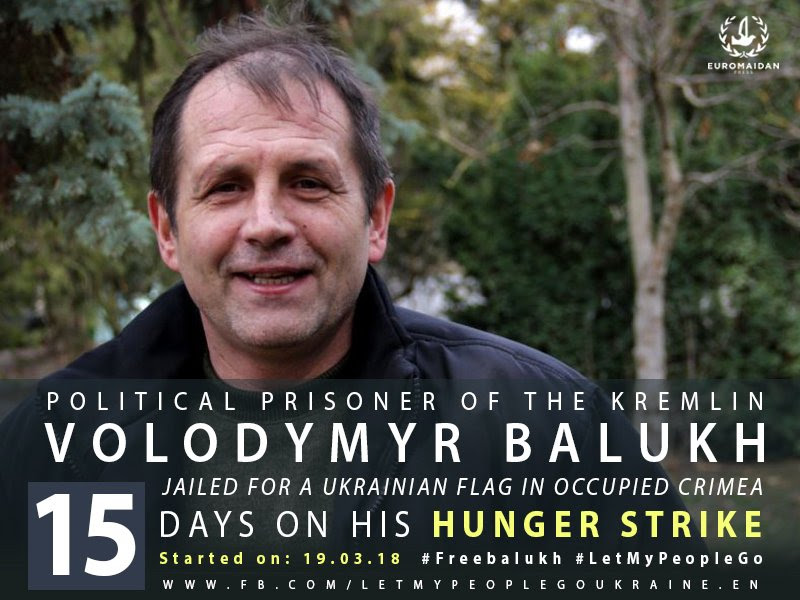 The Kharkiv Human Rights Protection Group (KHPG) reported, “Almost two weeks after Ukrainian patriot and political prisoner Volodymyr Balukh went on hunger strike in Russian-occupied Crimea, his lawyer has only just been able to see him. She reports that he is looking thin and gaunt, and that the SIZO [remand prison] staffare putting pressure on him to end his hunger strike.
The Russian-controlled authorities have also blocked any access to him, and it remains to be seen whether the Russian Human Rights Ombudsman will respond to her Ukrainian counterpart Lyudmilla Denisova’s request that doctors examine him.
47-year-old Balukh declared hunger strike on 19 March in protest at his two-and-a-half year prison sentence on grossly fabricated charges after he refused to conceal his pro-Ukrainian position.  Aside from a brief period under house arrest, he has been imprisoned since 8 December 2016, and there have been repeated concerns about his state of health.
Balukh is imprisoned in Simferopol, a fair distance from his home in Razdolne, making it effectively impossible for his elderly mother, who is in very bad health, to visit him. […]
Balukh was arrested on Dec 8, 2016, nine days after he nailed a plaque renaming his home No. 18 ‘Heroes of Nebesna Sotnya St’ in memory of the over 100 Maidan activists who were killed during Euromaidan.  He had rejected demands from the head of the local council to remove it.
During a grossly irregular ‘search’ of his home, 90 bullets and several trotyl explosive devices were allegedly ‘found’ in his attic.  He had no record of violence and the constant searches and series of administrative prosecutions he had faced since Russia’s invasion of Crimea for his openly pro-Ukrainian position made it inconceivable that he could have held anything illegal in his home.
The implausibility of the charges was just one of several compelling reasons why the renowned Memorial Human Rights Centre declared him a political prisoner well before the trial. […]
During his final address on August 1, Balukh pointed out that there was in fact no criminal case, only a farce acted out by those instructed to play it to the end. His words were essentially a message for all Ukrainians and any person confronted with the possibility of retaining his liberty by betraying his principles and acting against his conscience.
The full report from KHPG is available here
3. US Senator: US lethal defensive weapons will help Ukraine better defend itself against Russian aggression
In an interview with Radio Free Europe/Radio Liberty (RFE/RL), US Senator Rob Portman (R-OH), spoke about the provision of lethal defensive weapons to Ukraine by the US, which will help Ukraine better defend itself against Russian aggression. Portman, who sits on the influential US Senate Foreign Relations Committee, spoke with RFE/RL a day before beginning a fact-finding mission to Ukraine. To view the interview please click on the image below:
4. Britain needs to deal with the tide of Russian dirty money that has been sloshing through the city of London
Edward Lucas, Senior Vice-President at the Center for European Policy Analysis, wrote, “The synchronized expulsion of diplomats in the past two weeks marks a new level in the outside world’s impatience with the Kremlin. Following the nerve-agent attack in Salisbury on March 4th, Britain expelled 60 Russian embassy officials.
In solidarity, 29 allied and friendly countries told around 150 Russian officials to go home; NATO did the same with 10 people based at Russia’s mission to alliance headquarters in Belgium. The regime in Moscow has responded with tit-for-tat expulsions.
Rather too much attention has gone to the nuances in this spat: whether the tit is exactly the same as the tat, and the terms on which the departing diplomats can be replaced. There is a big difference between a permanent cut or closure, and the disruptive but repairable effect of accelerated departure and arrival.
What matters a lot more is whether this month’s activity is the prelude to a serious squeeze on the regime in Moscow, or merely a dramatic but ultimately symbolic expression of discontent.
The big responsibility here rests with Britain. If Theresa May’s government wants to build on the achievements of the past week, it should show that it is prepared to accept some economic pain and take some political risks. Above all, Britain needs to deal with the tide of Russian dirty money that has been sloshing through the City of London, and the upper reaches of the real-estate market, over the past quarter-century.
Laundering Russian money is bad in many ways. It makes Britain, and other Western financial centers, an accomplice of the worst people in Russia and other parts of the former Soviet Union. […]
That collusion with the Kremlin’s looting machine undermines anything we say about democracy, human rights, and the rule of law. It stokes anti-Westernism in Russia, and helps the regime’s argument that the only real difference between East and West is the level of sanctimony. […]
The most vital step in cleaning up our financial system is therefore to end the pernicious practice of anonymous beneficial ownership. This is an accidental and unwanted byproduct of the growth of limited liability companies. They grew up as a way to cap business risk to shareholders, thus encouraging entrepreneurship. Nobody ever said that they also conferred anonymity on the company’s owners.
Britain is belatedly tightening up the rules on beneficial ownership-but with a risibly generous deadline of 2021. A more credible timeframe should be months, or even weeks. Russia is watching. So too are our allies.”
0 Likes