UCC statement on attack in Toronto

UCC statement on attack in Toronto

April 24, 2018. OTTAWA. The Ukrainian Canadian Congress expresses its deep condolences to all those who lost family and friends in the terrible attack in Toronto. May the Memory of the Victims be Eternal. Вічная Пам’ять.

Yesterday, ten people were killed and fifteen injured in a deliberate and disgraceful attack when a man drove a van onto a busy pedestrian street near Yonge St. and Finch Ave.

“As a lifelong Torontonian, I was extremely shocked by yesterday’s cowardly attack in our wonderful city,” stated Paul Grod, National President of the UCC. “Our Ukrainian Canadian community joins all Canadians in prayer and remembrance for the victims and hopes for a speed recovery for all those injured. We express our gratitude to the Toronto Police Department, Paramedics and all first responders, whose courage saved lives and prevented further injuries.”

Toronto is home to the largest Ukrainian community in Canada. It is a welcoming, open and diverse city. We stand in solidarity with the people of Toronto. As Mayor John Tory said, “Toronto is a city that will not be cowed, will not be afraid, and will not waiver in the values that we hold dear.”

A note from the Ukrainian American Congressional Committee

The Ukrainian Congress Committee of America (UCCA), the largest representation of Americans of Ukrainian descent, strongly condemns the senseless act of violence which occurred on April 24th in Toronto, and we express our sincerest condolences to the families of the innocent victims. UCCA echoes the Ukrainian Canadian Congress’ (UCC) characterization of Toronto as “a welcoming, open and diverse city,” as just this past year we were warmly welcomed along with Ukrainian Diaspora leaders from around the world to honor the 50th Anniversary of the Ukrainian World Congress in Toronto. We stand in solidarity with UCC and the people of Toronto and commend the courageous acts of those who saved lives and prevented further injuries.

Knowing full well that “Toronto is a city that will not be cowed,” your Ukrainian-American neighbors to the south will continue to flock to the city with the largest Ukrainian community in Canada throughout the year in support of our North American neighbors.

Director of Communications and Media,  Ukrainian Congress Committee of America

A note from the Australian Federation of Ukrainian Organizations 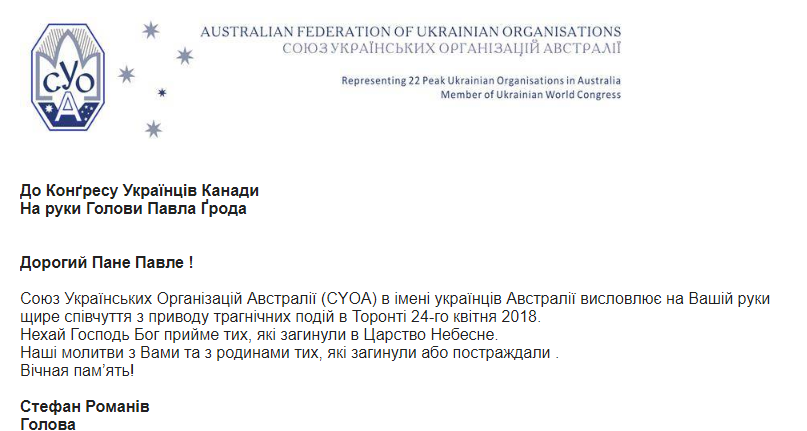