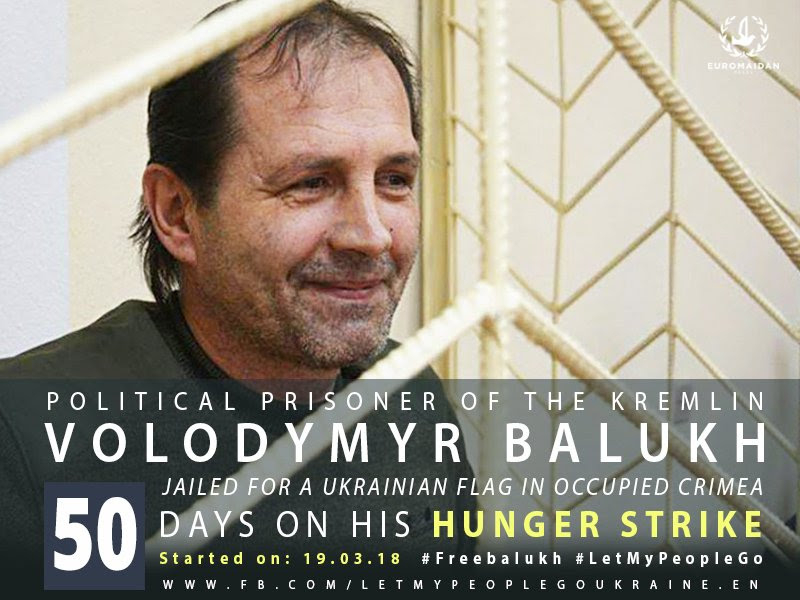 1. Russian Invasion of Ukraine
The General Staff of Ukraine’s Armed Forces reported at 12:30 PM Kyiv time that in the last 24 hours, no Ukrainian soldiers were killed and two Ukrainian soldiers were wounded in action. Russian-terrorist forces shelled civilian areas of Zaytseve with artillery, firing 27 artillery shells into the town. Civilian casualties and damage were being assessed as of 12:30 PM Kyiv time. In the last 24 hours, Russian-terrorist forces opened fire on Ukrainian positions 58 times in total, including at least 13 times with heavy weapons – mortars and artillery.
2. US House Armed Services Committee on how Defense Authorization Act 2019 counters Russian aggression and influence

The US House of Representatives Armed Services Committee released the National Defense Authorization Act for Fiscal Year 2019 (FY19 NDAA) on May 7.
The Committee stated, “Russia’s military and political strength grew to their present and increasingly-threatening state during the eight years of the Obama Administration, which scoffed at the idea of Russia as a geopolitical threat.”
The Committee outlined how FY19 NDAA confronts Russia:
“Helps Our Allies Defend Themselves Against Russian Aggression
Targets the Russian Arms Industry
Limits Contact and Assistance to Russia
Forces Russia To Comply with Treaties It Is Breaching
3. Marking UN Mine Awareness Day during Operation UNIFIER

The Maple Leaf reported, “In 2005, April 4 was proclaimed to be UN Mine Awareness Day. The theme for this year’s Mine Awareness day was Advancing Protection, Peace and Development. It called for countries to establish and develop national mine action capacities for not just mines but also explosive remnants of war, including Improvised Explosive Devices (IEDs).
In Kamianets-Podilskyi, at the Defence Demining Center, members of the Canadian Armed Forces have been working with the Armed Forces of Ukraine to help enhance their Explosive Ordnance Disposal training. UN Mine Awareness Day was not only a fitting event for the Explosive Ordnance Disposal specialists to commemorate, but also because this issue is something in which Ukraine is profoundly invested due to the military engagements along the eastern border.
‘As the Officer Commanding the Explosive Ordnance Disposal Capacity Development efforts of Operation UNIFIER, I see clearly just how important this subject is to the Armed Forces of Ukraine,’ noted Major Josh Bye. ‘Many of the Ukrainian soldiers that come through this training have firsthand experience from the Joint Force Operation Zone; almost everyone in Ukraine knows someone fighting there right now. This training will help their Sappers safely deal with explosive threats, making Ukraine safer and stronger.’
Over the course of UN Mine Awareness day, members of Operation UNIFIER in Kamianets-Podilskyi exchanged procedures and tactics with their Ukrainian counterparts. They also shared knowledge on explosive safety with locals that visited the Demining Center and reached out to the larger Ukrainian population through the media that was present. Most importantly, Armed Forces of Ukraine soldiers were able to share actual mining, booby trap, and IE Demplacement tactics that have been used along the eastern boarder of Ukraine. That sharing is very important for the improvement of the training.”
4. Ukraine, Turkey complete tenth round of free trade talks
Ukraine Business Journal reported that Ukraine and Turkey have completed the tenth round of Free Trade Agreement talks. “The latest one focused on access to the agricultural commodity, telecommunications and e-commerce markets, Ukrinform reports.
‘Our task is to create conditions for the exports of the processed high added value products, the products involving the latest technologies, because the latest technologies are also being used actively in the food and processing industry,’ Natalia Mykolska, the head of the negotiating delegation from Ukraine, Deputy Economic Development and Trade Minister of Ukraine and Ukraine’s trade representative, said,” Ukraine Business Journal stated.
0 Likes