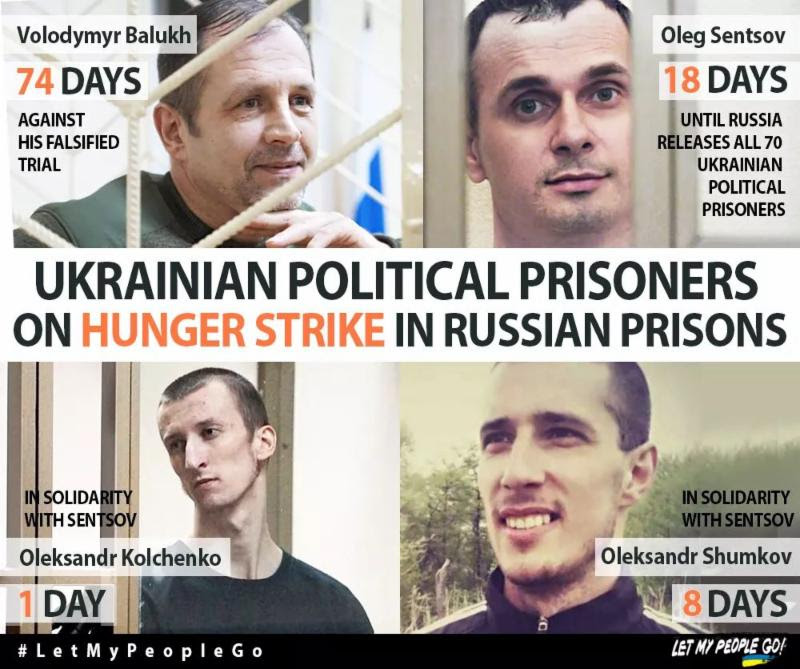 1. Russian Invasion of Ukraine
Ukraine’s Ministry of Defence reported that during the week of May 25-32, one Ukrainian soldiers was killed and 24 Ukrainian soldiers were wounded in action on the eastern front. Throughout the week, Russian-terrorist forces opened fire 220 times on Ukrainian positions on the Luhansk and Donetsk sectors of the front, including at least 51 times with heavy weapons -artillery, tanks and mortars. On May 28, at approximately 12PM Kyiv time, Russian-terrorist forces shelled residential areas of Zalizne with mortars. Daria Kazemirova, a 15-year-old girl, was killed by the shelling by Russian-terrorist forces.
2. Suspect in plot to assassinate journalist Babchenko remanded to custody
Radio Free Europe/Radio Liberty (RFE/RL) reported on May 31, “Borys Herman, the man suspected of overseeing a plot to assassinate journalist Arkady Babchenko, has been remanded in custody by a Kyiv court. Herman is alleged to have promised $40,000 to a would-be assassin for the killing of Babchenko.
Ukraine’s Security Service (SBU) says it thwarted the planned killing by working together with Babchenko to fake his death.The SBU faked Babchenko’s death on May 29, saying this contributed to thwarting an assassination plot allegedly organized by Russia’s secret services. […]
Prosecutor-General Yuriy Lutsenko, meanwhile, told Ukrainian TV channel Inter that Herman hired Oleksiy Tsymbalyuk, a man who had fought in the conflict in eastern Ukraine, to kill Babchenko, Interfax has reported.
Lutsenko previously said the person who was supposed to kill Babchenko cooperated with the investigation and will be treated as a witness in the criminal case.
‘Herman contacted Tsymbalyuk so that he would murder Babchenko,’ Lutsenko told Inter. ‘After that, Tsymbalyuk went to the SBU and joined an operative game to expose the organizer — Herman, according to our theory. A number of other SBU agents assisted with the operation.’
According to Lutsenko, Herman met with Tsymbalyuk several times and at one of their meetings gave him $20,000 as a 50 percent down payment for the journalist’s murder, and promised the remainder would be paid after the killing.”
3. Ukraine’s President meets with Babchenko: we have finally learned to defend the country and its citizens
Ukraine’s Presidential Administration reported on May 30, “President Petro Poroshenko met with journalist Arkady Babchenko, an attempt upon the life of which has been revealed by the Security Service of Ukraine. The meeting was attended by Head of the Security Service Vasyl Hrytsak and Prosecutor General of Ukraine Yuriy Lutsenko.
The Head of State called the successful operation of the Security Service and the rescue of the journalist the third birthday of Arkady, as well as ‘the birthday of the large 45-million nation that passed the exam on statehood.’
‘We finally learned to defend. Defend the country, defend its citizens and do it with extraordinary professional efforts of the new Security Service, which is capable of passing the exams of any complexity,’ he said. […]
‘I want to thank all Ukrainians who were not indifferent, who were ready to fight and act in order to save the country,” he said, noting that the attack on a journalist was organized from the territory of the Russian Federation by a person who ‘owns a huge arsenal of weapons, can create arms dumps and organize terrorist acts.’ [….]
Arkady Babchenko also expressed conviction that such operations are needed so that people and the world finally begin to understand what Putin’s regime is. ‘Thank God that everything has come to the end. The fact that I am sitting here now and that I am alive is all the merit of the Security Service. After all, if there had been no such special operation, they would have killed me and this is obvious. Friends, let’s finally understand who we are dealing with. Let’s finally understand what Putin’s Russia is in 2018, 2014, and 2020, and 2025. Let’s finally understand. Thank God that the West is beginning to understand,’ he added.”
4. Kolchenko declares hunger strike demanding release of Sentsov

The Kharkiv Human Rights Protection Group (KHPG) reported on May 31, “Oleksander Kolchenko, the already desperately thin Crimean civic activist imprisoned in the same Russian show trial as filmmaker Oleg Sentsov has declared a hunger strike, demanding that Russia free Sentsov.
According to lawyer Andrei Lepekhin,  his formal notification is from 31 May, Sentsov’s 18th day of hunger strike.  Sentsov has vowed  he will not end it until Russia frees all its Ukrainian political prisoners, and has said that if he dies before or during the World Cup, being hosted by Russia, his death should serve to help free the others. […]
Kolchenko and Sentsov were seized in Russian-occupied Crimea in May 2014, together with two other opponents of Russia’s annexation of their homeland – Gennady Afanasyev and Oleksiy Chyrniy.
All four men were held incommunicado for up to three weeks, first in Simferopol (Crimea), then in Moscow, almost certainly to hide the signs of the torture they were subjected to.”
5. European Council endorses agreement on a further €1bn in loans to Ukraine

The European Council stated, “On 29 May 2018, EU ambassadors endorsed, on behalf of the Council, an agreement with the European Parliament on a new package of macro-financial assistance for Ukraine.
A further €1 billion in loans will cover Ukraine’s financing needs over a period of two and a half years. The loans will support economic stabilisation and a programme of structural reforms, supplementing resources provided by the IMF and other donors.
The IMF has identified a $4.5 billion financing gap for 2018 and 2019, going over and above funding committed so far by the international community.
Macro-financial assistance is an exceptional form of financial aid that the EU extends to partner countries with balance-of-payments difficulties. This is the third operation for Ukraine since 2014. The EU additionally provides assistance under its neighbourhood policy.
The EU pledged €1.6 billion of macro-financial assistance in 2014 and €1.8 billion in 2015, of which Ukraine received €2.81 billion. A €600 million instalment was cancelled in January 2018 due to incomplete compliance with the conditions set.
Ukraine is part of the EU’s Eastern Partnership. An EU-Ukraine association agreement, which includes free trade provisions, entered into force on 1 September 2017.
The further disbursements will be conditional on Ukraine respecting democratic mechanisms and the rule of law, and guaranteeing respect for human rights. They will be subject to economic policy and financial conditions, focusing on structural reforms and sound public finances and including a timeframe for their fulfilment. The conditions will be laid down in a memorandum of understanding between Ukraine and the Commission.”
6. Naftogaz Ukrainy initiates enforcement of Stockholm Awards against Gazprom

Naftogaz Ukrainy reported on May 30, “In light of Gazprom’s unwillingness to comply with its legal obligations under the final awards rendered in the sales and transit arbitrations in Stockholm, Naftogaz has initiated enforcement of the USD 2.6 billion award. The company confirms that it has asked the Swiss courts to enforce the award, and understands that Swiss authorities already have taken measures against Gazprom’s assets there.
On 22 December 2017 and 28 February 2018 an Arbitral Tribunal under the auspices of the Arbitration Institute of the Stockholm Chamber of Commerce rendered final awards in the arbitrations between Naftogaz and Gazprom. The awards are final and were enforceable from the moment they were rendered.
Gazprom has not complied with the awards, which obliged Gazprom to resume gas supplies to Naftogaz at a price pegged to a liquid European hub and to pay USD 2.6 billion to Naftogaz as damages for underdeliveries of gas for transit. Naftogaz fulfilled all its obligations pursuant to the awards on 28 February 2018, when its remaining payment obligations for gas taken in 2013 and 2014 were settled.
Despite the awards and timely pre-payment by Naftogaz, Gazprom refused to resume deliveries to Naftogaz as agreed on 1 March 2018. Gazprom has also not paid the USD 2.6 billion it owes Naftogaz. Instead, Gazprom has launched ill-founded proceedings against the awards in the Swedish courts and initiated a new arbitration attempting to reverse the outcome of the awards.
Under international law, the arbitral awards are enforceable in practically every country of the world. Gazprom’s challenge proceedings do not prevent the enforcement of the awards.”
7. Canadian weapons destined for Kurds should go to Ukraine instead: Conservatives
The Canadian Press reported on May 29, “Andrew Scheer’s Conservatives want the federal government to give Ukraine $9.5 million worth of military equipment originally intended to help Kurdish forces in their fight against Islamic militants in Iraq.
The Trudeau government announced 15 months ago that it would give the Kurds weapons – including rifles, machine-guns, light mortars, grenade launchers and anti-tank missiles – as part of Canada’s revamped mission to help eradicate the Islamic State of Iraq and the Levant.
But there were delays in getting approvals from the Iraqi government, and in ensuring adequate safeguards were in place to prevent the weapons from winding up in the hands of paramilitary groups accused of committing war crimes in Iraq. […] To this day, those weapons remain in storage at a Canadian Forces supply depot in Montreal.
Now, the Conservatives say a Scheer government would send those arms to Ukraine instead. ‘They’ve been allowing these weapons to sit in storage and collect dust and, meanwhile, the violence in Ukraine has taken on a new spring offensive,’ said Conservative defence critic James Bezan. ‘Instead of letting those weapons go to waste, let’s get them in the hands of people that can use them.’ […]
The Ukrainian government has asked Canada to provide it with defensive weaponry, as the United States has done, but the Trudeau government has been non-committal. It did open the door six months ago to the export of Canadian-made weapons to Ukraine, but it refuses to say whether any requests for arms export permits to Ukraine have been received, much less approved.”
8. NATO Parliamentarians appeal for unity, credibility ahead of July NATO Summit

The NATO Parliamentary Assembly reported on May 28, “Parliamentarians from NATO nations appealed Monday for Alliance leaders to show unity at their summit in July and demonstrate that the organization remains credible in the face of security threats headed by Russia and terrorism. […]
Lawmakers urged the leaders to maintain a dual track Russia policy of defence and deterrence to counter Moscow’s efforts destabilize NATO allies and neighbours, linked with openness to ‘meaningful dialogue.’ […]
Their declaration also urged the leaders to give Bosnia and Herzegovina a reform plan to prepare it for NATO membership, and to back Georgia and Ukraine’s hopes of joining NATO.”
The declaration is available here: Assembly Declaration on affirming NATO’s unity and credibility at the Brussels Summit
0 Likes