Ukraine: Weekly Bulletin
June 23-29, 2018
1. Russian Invasion of Ukraine
Ukraine’s Ministry of Defence reported that during the week of June 22-28, nine Ukrainian soldiers were killed and 14 Ukrainian soldiers were wounded in action on the eastern front. Throughout the week, Russian-terrorist forces opened fire 188 times on Ukrainian positions on the Luhansk and Donetsk sectors of the front, including at least 52 times with heavy weapons – artillery, tanks and mortars. Returning fire, Ukrainian forces killed 22 and wounded 20 enemy combatants in the last week.
2. EU leaders agree to extend sanctions on Russia

Radio Free Europe/Radio Liberty (RFE/RL) reported, “European Union leaders have agreed to extend the bloc’s economic sanctions penalizing Russia for its aggression in Ukraine. The green light came during a dinner at an EU summit in Brussels early on June 29, and it will now be up to EU ambassadors to rubber stamp the decision in the weeks to come.
Both French President Emmanuel Macron and German Chancellor Angela Merkel urged the leaders to agree to roll over the sanctions after giving an update on the state of implementation of the Minsk peace accords. The sanctions, which mainly hit Russia’s banking and energy sectors, were first imposed in the summer of 2014 after Russia illegally annexed Ukraine’s Crimean Peninsula and began fueling the conflict in eastern Ukraine.”
3. Press Statement by Ukraine and the UK, Denmark and Canada at Ukraine Reform Conference

In the context of the Ukraine Reform Conference in Copenhagen 27 June 2018, the Government of Ukraine and the past, present and future hosts of Ukraine Reform Conferences – the UK (2017), Denmark (2018) and Canada (2019) – state the following: […]
“We, Ukraine, the UK, Denmark and Canada, remain committed to supporting the reform work of the Ukrainian government. We stress that a well-functioning, prosperous and resilient Ukraine remains of key strategic importance to Europe and the wider international community and is Ukraine’s best answer to Russian aggression. We recognize that a reformed Ukraine is a long-term project, and Ukraine has come a very long and productive way since 2014. All the more so as the reform results have been achieved despite Russia’s illegal annexation of Crimea, ongoing military aggression in Donbas and other means of destabilisation, including through continuing disinformation campaigns and cyber-attacks.
We will continue to work with international partners to constrain the Russian government’s ability to use disinformation in Ukraine and elsewhere, to spread malware while posing as cyber criminals, to sow discord in our societies and to engender public distrust in our democratic institutions. […]
In the period ahead, the Government of Ukraine will focus on achieving sustainable economic growth. As the Prime Minister stated today, priority in 2018-2019 will be given to privatization of state owned enterprises and improved corporate governance, improving the business climate, land market reform, decentralization, anti-corruption, energy sector reform, infrastructure development, public administration reform and innovation and digital development.
Reforms within these areas will facilitate growth for the economy at all levels of government and provide tangible benefits in the everyday life of the ordinary Ukrainian citizen, including marginalized communities. The success of the IMF Extended Arrangement is essential to preserve achieved macroeconomic stability in Ukraine and ensure continuity of the reform progress for the upcoming years.
We believe the annual Ukraine Reform Conferences have become a ‘driver for change’ and an important part of a continuing long-term partnership on reforms between Ukraine and the international community. We welcome the Government of Canada’s offer to host the 2019 Ukraine Reform Conference. We look forward to reviewing new reform progress and further strengthening the partnership between Ukraine and the international community when we meet in Canada.”
The full statement is available here
4. Parliamentary Assembly of Council of Europe resolution calls on Russia to release Ukrainian political prisoners

The Parliamentary Assembly of the Council of Europe reported on June 28, “Deeply concerned by reports that as many as 70 or more Ukrainian citizens widely considered to be political prisoners are still detained in Crimea or the Russian Federation on politically motivated or fabricated charges, the Assembly today called for their release ‘without further delay.’
The adopted resolution, based on the report prepared by Emanuelis Zingeris (Lithuania, EPP/CD), underlines that until their release, the Russian Federation should ensure full respect of their rights, including by respecting the prohibition on torture and inhuman or degrading treatment or punishment and ensuring the right of access to requisite medical assistance in order that health and well-being are adequately secured.
Citing the cases of Oleh Sentsov, Volodymyr Balukh and Pavlo Hryb in particular, ‘who meet the Assembly’s definition of political prisoners,’ the parliamentarians said it was alarmed by reports concerning their conditions of detention. […]
The adopted text calls to allow the monitoring of these detainees’ state of health and conditions of detention by ‘independent international monitors,’ including the CPT and the International Committee of the Red Cross, and to allow Ukrainian officials, including the Ukrainian Parliament Commissioner for Human Rights, to visit them.
The parliamentarians called on the Russian Federation to abandon the policy of imposition of Russian citizenship on Ukrainian citizens living in Crimea who do not wish to acquire it and to lift the ban on the Mejlis, which is contrary to international standards of freedom of association. The persecution of the Crimean Tatar People and the persons who represent them, including lawyers and human rights defenders, should also stop.”
5. Meeting of Ukrainian Prime Minister with Canada’s Minister of Foreign Affairs 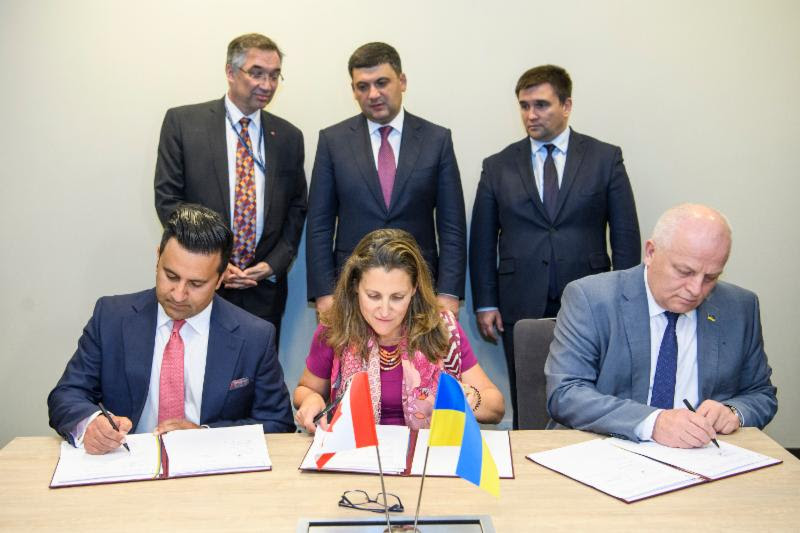 Ukraine’s Cabinet of Ministers reported on June 27, “Ukraine expresses readiness to ramp up cooperation with G-7 states on a wide range of issues, from security to the protection of gender equality. Prime Minister of Ukraine Volodymyr Groysman said this during a meeting with Minister for Foreign Affairs of Canada Chrystia Freeland.
The meeting took place in Copenhagen within the framework of the visit of the Head of Government to the Kingdom of Denmark and joint participation in the Second Ukraine Reform Conference.
‘We are grateful for the support of Ukraine in negotiations with international partners and for the shared position to oppose the construction of the pipeline Nord Stream 2,’ said Volodymyr Groysman.
During the meeting, a bilateral Letter of intent on energy cooperation was signed, in particular with the participation of the well-known Canadian ICORE NFP Corporation.
ICORE Energy Systems (NFP) is a Canada-based corporation that seeks to support and provide regulatory and technical training, strategic advisory services, information technology, innovation and collaboration for regulators of energy extraction resourses around the world in order to achieve a high level of regulation.”
6. Ukraine exports to EU up 26.6%
Ukraine Business Journal reported on June 26 that Ukraine’s exports to EU grew by 26.6%.  Ukraine Business Journal stated, “‘The European Union is Ukraine’s main trading partner in the export of goods. […] Compared to the same period in 2017, we managed to make a qualitative leap in the trade with the EU,’ the Economic Development and Trade Ministry said. Ukraine’s exports to the EU soared to USD 6.6 billion In January-May 2018, the share of Ukraine’s exports that went to the European Union constituted 42.9% of total exports, Ukrinform reports.”
7. Trump, Putin to meet in Helsinki July 16
The US White House stated on June 28, “President Donald J. Trump and President Vladimir Putin of the Russian Federation will meet on July 16, 2018, in Helsinki, Finland.  The two leaders will discuss relations between the United States and Russia and a range of national security issues.”
0 Likes