Ukraine: Daily Briefing
July 3, 2018, 5 PM Kyiv time
1. Russian Invasion of Ukraine
Ukraine’s Ministry of Defense reported at 12:30 PM Kyiv time that in the last 24 hours, no Ukrainian soldiers were killed and one Ukrainian soldier was wounded in action. In the last 24 hours, Russian-terrorist forces opened fire on Ukrainian positions on the Luhansk and Donetsk sectors of the front 21 times in total.
2. “Prosecutor” in Russian-occupied Crimea demands extra four year sentence for Ukrainian political prisoner on 106th day of hunger strike 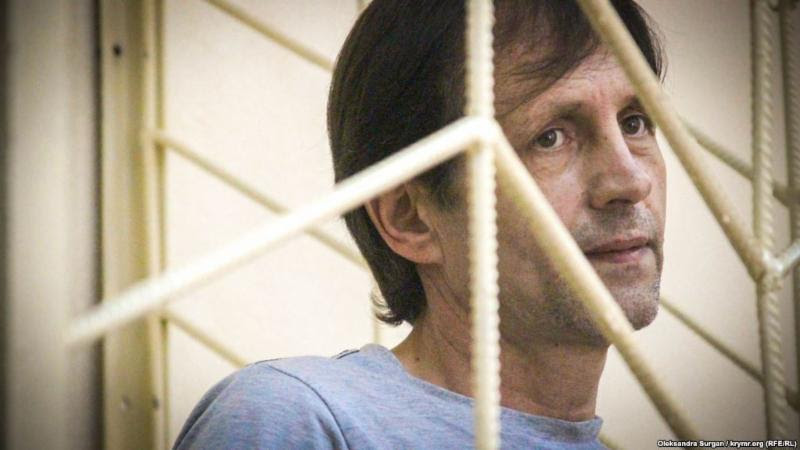 The Kharkiv Human Rights Protection Group (KHPG) reported, “A ‘prosecutor’ in Russian-occupied Crimea has demanded an extra four-year sentence against Ukrainian political prisoner Volodymyr Balukh for something termed ‘disorganizing the work of the detention unit’, with this to be added in full to the remaining two years of his current sentence.
Balukh is looking frail and gaunt after 106 days of either partial or, now, total hunger strike in protest at what has been internationally condemned as persecution for his pro-Ukrainian position – and the Ukrainian flag over his home.
He is not, however, broken, as his words  to the court made clear:
“This trial demonstrates one thing alone: the aim of all of this is to punish a person for free thinking and for love of his country. Introduce an article (of the criminal code) for hating this system, and then I will happily write a confession.  You can even give me a life sentence then – it would be much more honest than what’s happening here.  It is only out of respect for the people who come here to support me that I’m taking part in this farce.”
The charges of ‘disorganizing the work of the detention unit’ (under Article 321 § 2 of Russia’s criminal code) are both farcical and false. […] Volodymyr Balukh is clearly in prison for remaining true to Ukraine, with the Russian occupation regime’s revenge also directed against his elderly and nearly blind mother who has been left alone with no possibility of even seeing her son.”
The full report from KHPG is available here
3. Ukraine’s President: the world demands the release of Sentsov and all political prisoners imprisoned by Russia

Speaking on July 1 in Kyiv, Ukraine’s President Petro Poroshenko stated, “I would like to mention today another artist who is currently in jail in Russia only because he refused to give up the Ukrainian passport, only because he loves Ukraine. His name is Oleg Sentsov. And I also think that we can express words of high solidarity with the whole world, which demands from Putin the immediate release of Sentsov and all political prisoners imprisoned in the Russian Federation and the occupied territories. Freedom to Oleg Sentsov.”
4. Canadian Brookfield Business Partners lead a $160 million investment consortium in Ukraine
Ukraine Business Journal (UBJ) reported that Canadian Brookfield Business Partners will lead a $160 million investment consortium, which “will finance the construction of phase 1 of the Lviv IT Cluster. As reported in the UBJ Opportunity Reports IT the development is due of completion by the end of 2020, the first phase of the project will include 160,000 square meters of Class A office space with workplaces for dozens of IT companies and up to 14,000 IT professionals. The cluster of six 8-story buildings will also provide a new home for the Catholic University, a hotel, and parking spaces for some 3000 cars,” UBJ stated.
5. Dutch court held a hearing on Gazprom’s attempts to avoid payment to Naftogaz Ukrainy of the Award in the Transit Arbitration

Naftogaz Ukrainy reported on July 2, “A hearing concerning Gazprom’s attempts to avoid payment of the Award in the Transit Arbitration was held on Friday 29 June in Amsterdam, the Netherlands. Naftogaz expects that the court will require Gazprom to comply with earlier instructions of Dutch enforcement authorities and disclose information about its assets located in the Netherlands. The decision by the court is expected by 13 July.
In late May, Naftogaz received permission from a Dutch judge to attach Gazprom’s shares in its Dutch subsidiaries and the debts those subsidiaries owe to Gazprom. Six out of seven of Gazprom’s Dutch subsidiaries refused to cooperate with enforcement authorities and provide information about Gazprom shareholdings. This refusal has not affected the validity of the attachments. In the past weeks, courts have attached Gazprom assets in Switzerland, the UK and the Netherlands.”
0 Likes