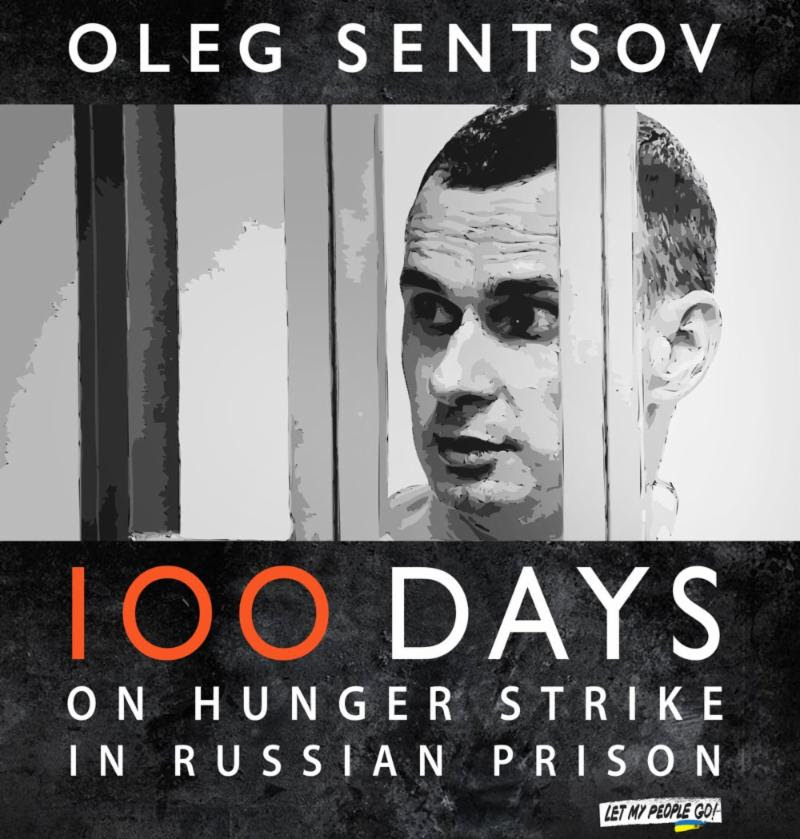 1. Russian Invasion of Ukraine
Ukraine’s Ministry of Defense reported at 12:30 PM Kyiv time that in the last 24 hours, no Ukrainian soldiers were killed and two Ukrainian soldiers were wounded in action. In the last 24 hours, Russian-terrorist forces opened fire on Ukrainian positions on the Luhansk and Donetsk sectors of the front 23 times in total. Returning fire, Ukrainian forces killed 3 and wounded 2 enemy combatants in the last 24 hours.
2. 100th day on hunger strike: The West has levers it could use to make Russia free Oleh Sentsov
The Kharkiv Human Rights Protection Group (KHPG) reported, “It is exactly 100 days since Ukrainian filmmaker and Kremlin hostage, Oleh Sentsov began his hunger strike, demanding that Russia release all its Ukrainian political prisoners.  Demonstrations in solidarity will be taking place outside Russian embassies throughout the world, yet the Kremlin appears to be deaf to all calls for his release and just keeps churning out cynical lies, presumably aimed at justifying Russian President Vladimir Putin’s intransigence.
Sentsov himself has written  to his cousin that she and others should stop assuring him that freedom is close, as he no longer believes that. A poignant letter, dated 14 August, has just been received by RosUznik, the civic initiative for writing to political prisoners.  Sentsov sends greetings to everybody, and writes:
‘Thank you very much for your greetings on my birthday [back on 13 July] which I received from various people via the RosUznik site (the letters came with a long delay). Thank you for your warm words and greetings. I will try not to let you all down, to not give up and to not die. Though I guess of those three wishes, I will only be able to fulfil at most two (with the symbol for a smiling face).’  He goes on to thank everybody for supporting not only him, but all the other political prisoners. […]
Russia’s abuse of its legislation on terrorism with respect to Sentsov and three other opponents of Russia’s invasion and annexation of Crimea was condemned soon after the men’s arrests, then during the ‘trial’ of Sentsov and civic activist Oleksandr Kolchenko and again after the 20-year sentence passed on Sentsov and 10-year on Kolchenko.
However, condemnation differs little from expressions of ‘deep concern’. It sounds good, it is quotable, but it takes more to impinge upon a Russian leader who has flagrantly violated international law, who has almost certainly ordered the killing of enemies on other countries’ territories and who has committed war crimes in Ukraine and Syria. […]
Russia’s economy is plummeting, as is Putin’s popularity after recent economic measures, and while sanctions are hurting.  They could hurt more, and could hit harder at Putin himself and all his closest entourage, whose vast fortunes are hidden away in the West.
Sentsov is on hunger strike on behalf of at least 70 Ukrainians illegally imprisoned since the beginning of Russia’s undeclared war against Ukraine in 2014. The number of political prisoners is inexorably rising, and Sentsov’s death will only unleash further repression in occupied Crimea unless Russia is held to answer. Western governments do have levers and can use them to convince Putin that not releasing Sentsov will hurt him and his cronies personally.”
3. UK Minister for Europe calls for immediate release of Ukrainian political prisoners held by Russia
The UK Foreign and Commonwealth Office stated, “Two Ukrainian nationals held in Russian detention, Oleh Sentsov and Volodymyr Balukh, are on hunger strike to demand the Russian authorities release all Ukrainian political prisoners. Today marks Oleh Sentsov’s 100th day on hunger strike. Minister for Europe and the Americas Sir Alan Duncan said:
‘On the 100th day of Oleh Sentsov’s hunger strike, we remain extremely concerned for Mr Sentsov’s health and treatment at the hands of the Russian authorities.
Mr Sentsov was detained by Russia after expressing peaceful opposition to the illegal annexation of Crimea. He was convicted on fabricated terrorism charges and sentenced to 20 years in prison. Mr Balukh is also on long term hunger strike and it is reported that the conditions of both men are rapidly deteriorating and their lives are under threat.
‘It is critical that Russia allows Ukrainian officials and international humanitarian organisations unrestricted access to Mr Sentsov, Mr Balukh and up to 70 other Ukrainian political prisoners. No one should be imprisoned for opposing the illegal annexation of Crimea. Russia must now uphold its obligations under international humanitarian and human rights law and release them immediately.'”
4. US Treasury targets Russian efforts to circumvent US sanctions
The US Department of the Treasury stated, “Today, the U.S. Department of the Treasury’s Office of Foreign Assets Control (OFAC) is targeting Russian actors’ efforts to circumvent U.S. sanctions.  This action was taken pursuant to authority provided under Executive Order (E.O.) 13694, ‘Blocking Property of Certain Persons Engaging in Significant Malicious Cyber-Enabled Activities,’ as amended, and as codified by the Countering America’s Adversaries Through Sanctions Act (CAATSA), to designate two entities and two Russian individuals in order to counter attempts to evade U.S. sanctions.

‘The Treasury Department is disrupting Russian efforts to circumvent our sanctions,’ said Steven T. Mnuchin, Secretary of the Treasury.  ‘Today’s action against these deceptive actors is critical to ensure that the public is aware of the tactics undertaken by designated parties and that these actors remain blocked from the U.S. financial system.'”