These are Mr. Bohdan Wynnyckyj for Ontario PC, Fr. Ihor Kutash for Quebec PC, and Ms. Joanne Lewandoski for Manitoba PC. Thank you for becoming part of the Ukrainian Canadian Congress!

Bohdan Wynnyckyj is an Ontario native, born in Toronto in 1964. Since his young years, Bohdan has been an active member of the Ukrainian community. He was a member of the local Plast, as well as UNO “Zakhid”, and St. Nicolas Church.
After Canadian Friends of Ukraine, the non-profit, non-governmental organization was established in the 1990s, Bohdan served as a Vice-President and after, as a President of the organization during 1994-98.

Bohdan was a Canadian Expert working on the Ukrainian Regional Governance and Development Project during 2005-2009 funded by Canadian International Development Agency. He continued working as an expert and has made a valuable input during another project titled Federation of Canadian Municipalities, Municipal Local Economic Development Project – in Ukraine during 2009-2014. Working with Kyiv and 7 Ukrainian partner cities, Bohdan has developed the country’s first data-driven performance measurement system for cities.

Bohdan has been the Chair, Parish Council, St. Joseph’s Ukrainian Catholic Church, Oakville during 2004-2006. He also is an active member of Ukrainian Canadian Congress, serving as its Board Member since 2014. 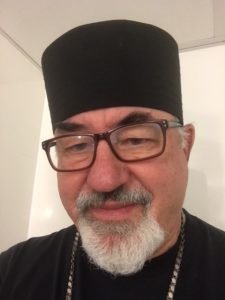 Fr. Ihor Kutash was born in Smoky Lake, Alberta, in 1947 to Annie and George Kutash who came to Canada from Bukovyna in 1924.  He has three sisters and many nieces, nephews and cousins.  He received his theological education at St. Andrew’s College in Winnipeg and was ordained to the priesthood of the Ukrainian Orthodox Church of Canada in Montreal in 1969.  He has ministered there as Dean of St. Sophie Cathedral for 30 years, and Rector of St. Mary the Protectress Parish 13 for 15.

He obtained a Master’s and then a Doctor’s degree in Religious Studies at McGill University.  He is a long-time chaplain at McGill and taught courses in Eastern Christianity at four universities. Active in ecumenical dialogues, he has served as Chair of the Christian Jewish Dialogue of Montreal and been a member of the Faith and Witness Commission of the Canadian Council of Churches.

He has also served as President of the Ukrainian Canadian Congress in Montreal, as well as the Ukrainian National Federation.  He has also served as co-President of the St. Volodymyr Cultural Association, which sponsors the annual Ukrainian Festival held in Parc de l’Ukraine in Rosemount.  He is fluent in his native Ukrainian as well as English and French (and does quite well in Russian and Polish).  He is the proud father of Andrey and doting grandfather of Kalyna, Matthew and Timothy.  He has also often been a godfather.

Born and raised in Sandy Lake, MB. Joanne’s parents and grandparents instilled in her an understanding and appreciation of her Ukrainian heritage, a willingness to help others and to give back to one’s community. Following her elementary grade schooling in Sandy Lake Joanne completed high school in Winnipeg at Immaculate Heart of Mary School where she was school president in grades 11 and 12. While living in residence at Immaculate Heart Academy Joanne studied piano under the tutelage of the Sisters Servants of Mary Immaculate and has herself now taught piano to two generations of students.

Graduating with degrees in Science and Education at the University of Manitoba Joanne was Education Faculty Senior Stick, on the student council of St. Paul’s College as well as the UMSU Board. After graduation, she worked in the Transcona Springfield School Division teaching science and music, followed by many years as a guidance counselor.

Joanne has served as an executive member of many Ukrainian community organizations including the Ukrainian Cultural and Educational Centre Oseredok, Osvita Foundation, Orlan Ukrainian Folk Ensemble, Ukrainian National Federation of Manitoba, and has been responsible for the Ukrainian Catholic Archeparchy children’s summer camp for many years. She has also been President of the U. of M. Alumni Association and a board member of the Winnipeg Symphony Orchestra, the Council of Christians and Jews, and the Folk Arts Council. When the Folk Arts Council established its Hall of Fame in 1990 Joanne was the youngest of the initial five inductees and to this day continues her active involvement with the Ukraine – Kyiv pavilion. Joanne has received the Bulava Award in 2017 for volunteerism in the Ukrainian-Canadian Community.