Ukraine: Weekly Bulletin
August 25-31, 2018
1. Russian Invasion of Ukraine
Ukraine’s Ministry of Defence reported that during the week of August 24-30, three Ukrainian soldiers were killed and eleven Ukrainian soldiers were wounded in action on the eastern front. Throughout the week, Russian-terrorist forces opened fire 183 times on Ukrainian positions on the Luhansk and Donetsk sectors of the front, including at least 48 times with heavy weapons – mortars, tanks and artillery. Ukraine’s Joint Forces Operation headquarters reported that returning fire, Ukrainian forces killed 13 and wounded 20 enemy combatants in the last week.
2. US State Department condemns Russia’s Harassment of International Shipping Transiting the Kerch Strait and Sea of Azov
The US State Department stated on August 30, “The United States condemns Russia’s harassment of international shipping in the Sea of Azov and the Kerch Strait. Russia has delayed hundreds of commercial vessels since April and in recent weeks has stopped at least 16 commercial ships attempting to reach Ukrainian ports.
Russia’s actions to impede maritime transit are further examples of its ongoing campaign to undermine and destabilize Ukraine, as well as its disregard for international norms.
The United States supports Ukraine’s sovereignty and territorial integrity within its internationally recognized borders, extending to its territorial waters. We call on Russia to cease its harassment of international shipping in the Sea of Azov and the Kerch Strait.”
3. Real wages in Ukraine grow 14.7% yoy in July
Ukraine Business News reported on August 30, “Real wages in Ukraine grew 14.7% yoy in July, accelerating from 13% yoy in June, the State Statistics Service reports. The average monthly nominal wage increased to UAH 9,170, or $327.The leading regions for monthly wages are: Kyiv city — $494; Ukrainian-controlled Donetsk region — $349; and Kyiv region — $336. The regions for the fastest wage growth yoy are: Lviv, Ternopil, Ivano-Frankivsk, Zhytomyr, and Kyiv. Concorde Capital’s Evgeniya Akhtyrko writes: ‘Slowing inflation and a continuing economic upsurge are fueling the relatively high growth rate of real wages.'”
4. Interview with Canada’s Ambassador to Ukraine in Business Ukraine Magazine 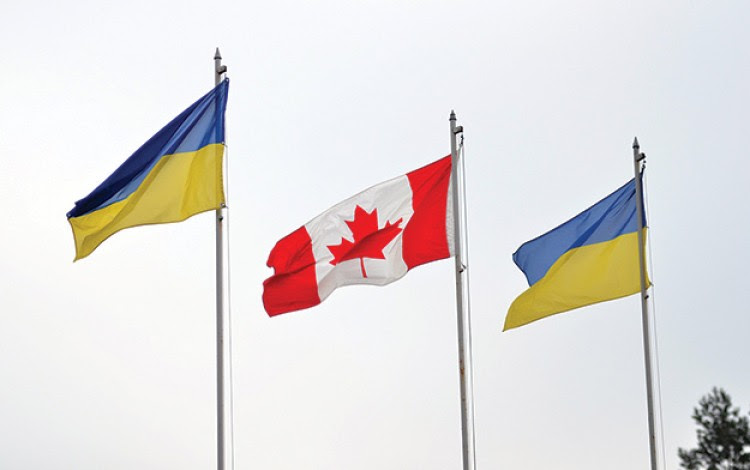 Business Ukraine Magazine interviewed Canada’s Ambassador to Ukraine Roman Waschuk on August 28. “Few countries have deeper links to independent Ukraine than Canada, which is home to one of the world’s largest Ukrainian diaspora communities. Since taking up his post in Kyiv in October 2014, Canadian Ambassador to Ukraine Roman Waschuk has been party to some of the most significant developments in this special relationship. From free trade to military training, the Canada-Ukraine relationship has taken on a number of new dimensions in recent years that are allowing both countries to expand upon the inbuilt advantages presented by the prominence of the Ukrainian diaspora in Canada.  […]
The Canada-Ukraine Free Trade Agreement (CUFTA) came fully into force in summer 2017 and has already made an impact of bilateral trade ties. ‘Over the past year, we’ve witnessed double digit growth on both sides in terms of trade. What we are now seeing is a broadening of this trade relationship, with people trying new kinds of products. Entirely new categories are appearing that did not previously exist,’ says Ambassador Waschuk.  […]
In addition to heading up Canada’s diplomatic mission to Ukraine, Ambassador Waschuk also currently holds the rotating leadership of the G7 Support Group, an international initiative unique to Ukraine that brings together the ambassadors of G7 nations […].
Since taking over responsibility for leading the initiative at the start of the year, Ambassador Waschuk says he has sought to bring a little additional structure to the G7 Support Group, with regular meetings now taking place on a biweekly basis. He sees the Support Group as a way of improving communication with the Ukrainian government and other stakeholders, while at the same time also helping to improve the clarity of the G7 message itself. […]
Since the outbreak of hostilities with Russia in 2014, Canada has been at the forefront of efforts to bolster Ukraine’s defense capabilities. The Canadian government’s Operation Unifier training mission to Ukraine got underway in 2015 and has so far seen hundreds of Canadian military personnel working in the country alongside their Ukrainian counterparts. […]
Ambassador Waschuk says Operation Unifier is now widely recognized within the Canadian military as a model for how Canada can build capacity internationally with other armed forces. […]
Canada’s military training mission to Ukraine has proven to be a two-way street offering valuable insights into hybrid warfare for the Canadian side to take home and incorporate into their military thinking. Many of the Ukrainians currently engaged in training with their Canadian colleagues are fresh from the frontlines of the confrontation against hybrid Russian forces who are able to deploy some of the Kremlin’s most advanced military technologies and tactics. […]
When many people in Ukraine think of Canada, they instinctively focus on the diaspora and its traditionally dominant role in bilateral relations. However, the advent of free trade is now helping to broaden the horizons connecting the two countries. […] ‘The diaspora connection is very useful but it should not limit us in our aspirations. We are now concentrating efforts on activating the full potential in both our countries. This means moving beyond traditional areas to broaden the relationship. The focus now is on all of Canada and all of Ukraine.'” The full interview is available here
5. Ukraine and Operation UNIFIER achieve a key milestone in training
Captain Karyn Mazurek, Public Affairs Officer, Joint Task Force-Ukraine, wrote for the Maple Leaf, “On the 20th of August, a ceremony was held in Kamianets-Podilskyi, in south western Ukraine, to mark a milestone in Operation UNIFIER’s mission. The Canadian team transitioned full responsibility for the planning and execution of the Improvised Explosive Device Disposal (IEDD) training program to the Armed Forces of Ukraine (AFU).
This ceremony marks the transition of one of the most specialized aspects of Counter-Improvised Explosive Device (C-IED) training. This has been a standing goal for Operation UNIFIER: advisors and mentors have been working towards this day since September 2015 when Canada’s military training mission in Ukraine was established.
For missions like Operation UNIFIER which have a role to train, advise, and assist indigenous forces, a key indicator of progress is when hands-on instruction and day-to-day advice and mentorship are no longer required to plan, run, and evaluate training. The AFU has proven its ability to do this for IEDD training, so Operation UNIFIER is able to formally disengage from this specific effort. […]
With the transition of IEDD training to full Ukrainian ownership, Operation UNIFIER’s staff in Kamianets-Podilskyi can shift focus to building the remaining four levels of the five-level Basic Combat Engineer Sapper model. The five-level model largely mirrors the CAF’s training in the Combat Engineer field, and Operation UNIFIER’s combat engineers will work side-by-side with Ukrainian colleagues to develop the remaining four levels of Sapper training.
‘The transition of the IEDD training program to full ownership of the Armed Forces of Ukraine is the culmination of almost three years of determined effort and teamwork. This is a great day for both the Operation UNIFIER team and our colleagues in the Armed Forces of Ukraine, one that Operation UNIFIER looks forward to repeating for our other training objectives throughout this country,’ says Lieutenant-Colonel Fraser Auld, Commander of Joint Task Force-Ukraine.
‘Developing new approaches and amending military training design and delivery across Ukraine is no easy task. But this ceremony is a clear indication that progress is occurring and the Armed Forces of Ukraine are taking concrete steps towards NATO compatibility.'”
6. Ukraine’s President travels to US to pay tribute to late Senator John McCain 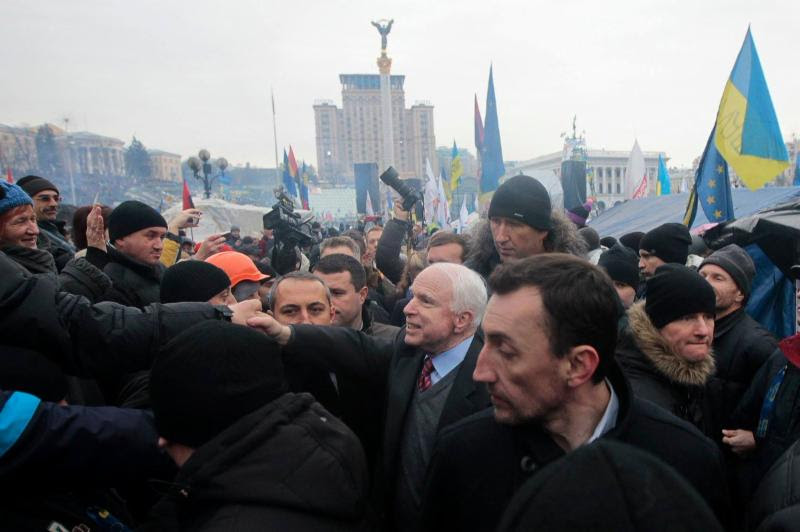 Ukraine’s Presidential Administration reported, “On August 31 – September 1, 2018, President of Ukraine Petro Poroshenko will make a private visit to the United States of America to attend a farewell ceremony for U.S. Senator John McCain.
‘On behalf of the people of Ukraine and on my own, I intend to pay tribute to the outstanding personality, the great friend of Ukraine. The invincibility of his spirit motivates. His sense of historical moment is impressive. His vision of the future inspires,’ the Head of State noted before departing to Washington.

‘In the memory of Ukrainians, Senator McCain will forever remain a close friend who stood side by side in defense of democracy at the Kyiv Maidan and a loyal brother in arms who shared a New Year’s dinner with Ukrainian soldiers on the line of combat clashes. His faith in the Ukrainian people cannot be overestimated, as well as the contribution to the deterrence of the Russian aggressor. John McCain’s credible voice will forever remain one of the loudest in support of an independent, democratic and prosperous Ukraine,’ the President said.”