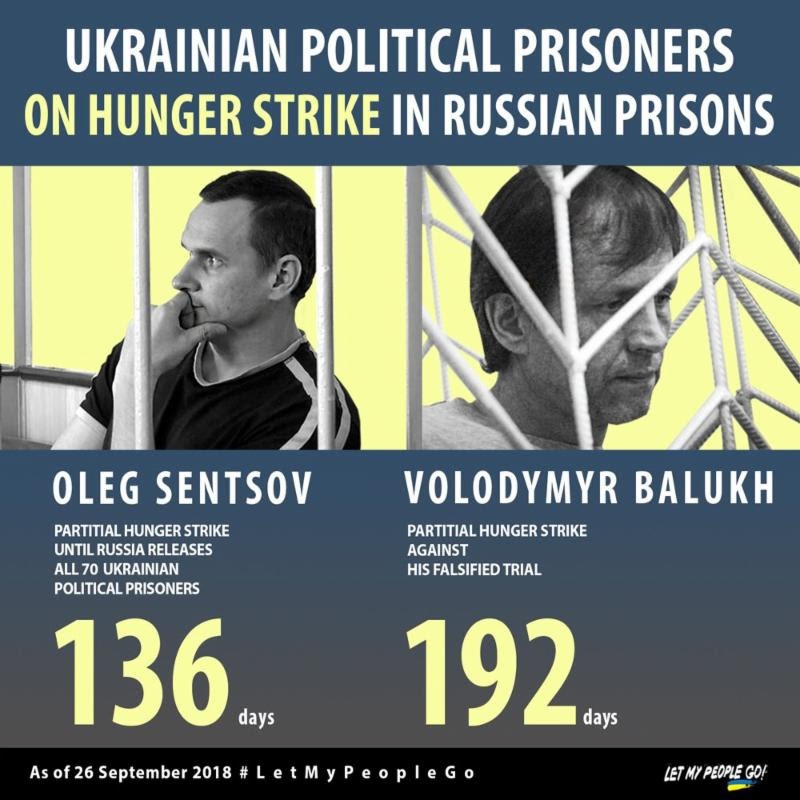 1. Russian Invasion of Ukraine
Ukraine’s Ministry of Defense reported at 12:30 PM Kyiv time that in the last 24 hours, no Ukrainian soldiers were killed or wounded in action. In the last 24 hours, Russian-terrorist forces opened fire on Ukrainian positions on the Luhansk and Donetsk sectors of the front 15 times in total, including at least 3 times with heavy weapons. Returning fire, Ukrainian forces killed 2 and wounded 2 enemy combatants.
2. Ukraine’s President addresses UN General Assembly
Ukraine’s President Petro Poroshenko addressed the UN General Assembly. President Poroshenko stated, “My fellow citizens have become a part of that one-fifth of the world population who is experiencing the horrors of war. […]
This has been a daily reality for Ukrainians for four years now. Thousands of deaths, destruction, displacement and human suffering. For my fellow citizens, these years have become a tremendous challenge – a test for their determination and solidarity, resilience and faith.
Let us not forget what this war is about. Ukraine made a sovereign decision to live its way and promote the Free World based on democratic values and rules. Russia punishes Ukraine for this decision. It kills. It ruins homes. It lies on industrial scale.
It pretends that Ukraine, as well as Georgia ‘attacked themselves.’ Do we know which neighbor of Russia will ‘attack itself’ next? Or will the world be ‘comfortably numb’ in a hope that ‘the next one won’t be me’?
As we defend Ukraine’s land and our free choice, as we counter the resurging neo-imperialist power willing to divide the world anew – we defend the Free World. […]
Appeasement and quick fixes to difficult problems have proven to be a false option. It has proven that staying comfortably silent when international norms are breached does not stop but encourages the offender to continue its destructive policies.
Your silence is exactly what the Kremlin weaponizes against Ukraine and, ultimately, against all of us! […]
In the absence of a strong and united reaction, such extremely irresponsible and selfish actor resorts to the tactic of further escalation, creating new crises, raising the stakes, blackmailing other countries and even entire international organizations. […]
We shall not allow this to happen. We shall bring the world back on track. What is the cure? In one word: responsibility. The international community’s ability to ensure systemic and inevitable responsibility for each and every violation of international laws – first and foremost norms and principles of the UN Charter – is the benchmark indicating how successful we, as the family of nations, can be in achieving common goals.
Ensuring responsibility is never an easy feat. Let me be clear on this point: Nothing will stop Moscow from continuing its aggressive expansionist policies if it does not face a united stand of the international community, if punishment for its actions does not become inevitable.”
The full transcript of President Poroshenko’s speech is available here
3. US Senate Foreign Relations Committee passes resolution that recognizes Holodomor as a Genocide
The US Senate Foreign Relations Committee passed a resolution marking the 85th anniversary of the Holodomor, which recognizes the Holodomor as a Genocide. The resolution was introduced by US Senators Rob Portman (R-OH) and Dick Durbin (D-IL). The resolution “would commemorate the anniversary of the Holodomor and recognize the Soviet Union’s role in perpetrating this genocide. The resolution builds on a number of congressional actions to condemn the Holodomor and honor its victims, including the 2015 dedication of the Holodomor Memorial in Washington, D.C. The resolution now awaits a vote on the Senate floor,” Sen. Portman’s office stated.
Senator Portman stated, “We must never forget the atrocities committed against the Ukrainian people at the hands of the Soviet Union during the Holodomor. This important resolution honors the memory of the millions of Ukrainians who suffered under Joseph Stalin’s cruel policy of using starvation as a weapon to try to break Ukraine’s yearning for independence from Soviet oppression. Ukraine continues the fight today to defend its independence and sovereignty in the face of Russian aggression, and this resolution serves as an important reminder of the horrible atrocities inflicted upon Ukraine and the perseverance of a people whose spirit cannot be broken.”
The text of the Resolution is available here
4. China Pitches $1 billion Wind-Solar Project for Ukraine’s Black Sea
Ukraine Business News reported, “TouchStone Capital Group Holdings, a London-based Chinese investment firm, has presented plans for a $1 billion, one gigawatt combined solar and wind power plant on Ukraine’s Black Sea shelf, the Energy and Coal Industry Ministry reports. Described as ‘unique not only for Ukraine, but also for the nearest neighboring countries,’ the plant would balance sun and wind to provide an even electricity flow, the Ministry reports. It added: ‘The project also envisages the use of a significant (more than 30%) share of components of Ukrainian production.'”
0 Likes