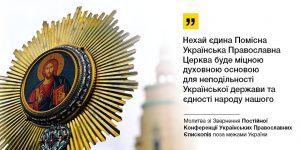 October 11, 2018. OTTAWA. The Ukrainian Canadian Congress (UCC) warmly welcomes the historic decision by the Holy and Sacred Synod of the Ecumenical Patriarchate recognizing the right to independence of Ukraine’s Orthodox Church.

“The decision announced by the Holy Synod has been awaited by millions of Ukrainian faithful for many decades,” stated Paul Grod, National President of the UCC. “This is cause for all Ukrainians around the world to rejoice, no matter their faith, confession, or religious allegiance.”

For centuries, the Ukrainian people were forced to live under the yoke of foreign oppressors and saw their language, culture, faith and identity attacked, suppressed and denied. In 1991, exercising their inviolable right to self-determination, the Ukrainian people declared independence – and an indivisible, sovereign, democratic State – Ukraine – was formed.

But the vestiges of hundreds of years of foreign tyranny endured. One such vestige was the dubious claim by Russia of control over the Orthodox Church of Ukraine. The Ukrainian people were thus denied the basic right of a sovereign nation for their own faith, traditions and identity. With yesterday’s decision, recognizing the right of independence of the Ukrainian Orthodox Church, the Holy Synod has once and for all corrected an historic injustice.

The full statement from the Ecumenical Patriarchate

Statement of the Permanent Conference of Ukrainian Orthodox Bishops Beyond the Borders of Ukraine, April 24, 2018