UCC concerned about next Interpol President19 November 2018Next 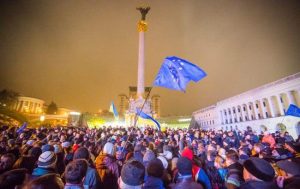 November 21, 2018. OTTAWA. On November 21, the Ukrainian people mark the Day of Dignity and Freedom. Five years ago today, the people of Ukraine took to the streets in protest of their government’s decision not to sign the EU-Ukraine Association Agreement.
The regime responded with violence. On the night of November 29-30, security forces brutally beat young protestors gathered on Kyiv’s Independence Square. In response, in cities and towns all across Ukraine, the people rose up with mass demonstrations in defence of their inalienable right to live in freedom. So began the Revolution of Dignity.
The Revolution of Dignity was a demonstration of a nation’s courage and unity of purpose. It was the Ukrainian peoples’ expression of a centuries-long struggle to live in liberty, peace, human dignity and to choose their own common destiny. With their resolve and their determination, the Ukrainian people cemented their choice to join the European community of nations.
Months of protests were met with increasing repression and violence by the state. On February 18-20, 2014, one hundred people were murdered when the Yanukovych regime ordered security forces to fire upon their own people. But the people would not be moved. The Maidan withstood the assault of the security forces, and the regime retreated. Yanukovych fled the capital, abdicating his office, and was removed as President by a constitutional majority vote in Ukraine’s Parliament.
The brave patriots who fell in defence of Ukraine’s freedom on those cold February days are remembered as the Heavenly Hundred (Небесна Сотня). We honour their memory. Their sacrifice shall never be forgotten. Вічная Пам’ять.
Today Ukraine defends itself against an external aggressor. On the battlefields of eastern Ukraine, Russia wages war against Ukraine in an attempt to once again subjugate the people of Ukraine to Moscow’s tyranny. Every day, Ukrainian soldiers fight and die to protect Ukraine’s liberty and the ideals of the Revolution of Dignity. With God’s help, they will be victorious.
To find out more about the National Memorial to the Heroes of the Heavenly Hundred – Museum of the Revolution of Dignity please see here: http://maidanmuseum.org
0 Likes