December 11, 2018. MONTREAL, QC. The Ukrainian Canadian Congress (UCC) held its Annual General Meeting and a meeting of the Board of Directors in Montreal, QC, on December 7-9, 2018.

The Board of Directors heard reports from UCC Provincial Council Presidents from British Columbia, Alberta, Saskatchewan, Manitoba, Ontario and Quebec, and several UCC Branch Presidents, who discussed their activities and successes and challenges in engaging the community.

Over 50 delegates and guests from member organizations, provincial councils and local branches participated in the AGM. Dialogue, debate and planning sessions were focused on the three broad pillars that guide the work of the UCC:

“Our community in Montreal was very glad to host this year’s AGM,” stated Rev. Father Ihor Kutash, President of the UCC Quebec Provincial Council. “Thank you to everyone who participated in the lively, vibrant and substantive discussions and debates.”

On December 8, The UCC Quebec Provincial Council and Montreal branch hosted the UCC Leadership Awards Dinner. Orest Humenny was the Master of Ceremonies. The keynote address was delivered by the Honourable Marie-Claude Bibeau, Canada’s Minister of International Development. Minister Bibeau spoke passionately about her 5-day visit to Ukraine this summer, about the support the Government of Canada is providing and Canada’s $50 million annual commitment to international development assistance to Ukraine.

“Canada stands with Ukraine on its journey to implement reforms. That includes strengthening democratic institutions, promoting women’s participation in politics, building public confidence in elections, and deterring fraud and intimidation,” Minister Bibeau stated. “Canada is a strong supporter of Ukraine’s current democratic reform. Through this support, we are reinforcing the voices of women and youth, so they can help build a better Ukraine for everyone.”

Minister Bibeau announced that Canada will be providing $5 million over five years to the Women of Ukraine: Heard, Capable, Resilient initiative. This initiative aims to strengthen and build the capacity of women`s rights organizations in Ukraine to meaningfully contribute to the reform process and advance gender equality at all levels, increasing women`s and girls` enjoyment of their human rights. The Pact Institute will help empower five selected women’s rights organizations to become regional hubs and to effectively cascade knowledge and skills down to the local level, based on individual organizations` needs.

“The UCC was honoured to welcome Minister Bibeau to the Leadership Awards dinner. Having travelled to Ukraine last summer as part of Minister Bibeau’s delegation, I was impressed by her commitment and dedication to the principles of democracy, equality and diversity that we as Canadians hold dear,” stated UCC President Alexandra Chyczij. “Minister Bibeau is a true champion of these principles and the UCC looks forward to continuing our close cooperation with her Department and the Government of Canada.”

National Leadership Awards were presented to: 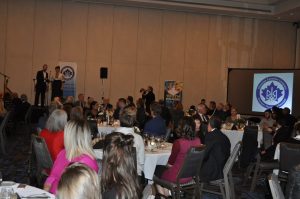 Over 200 guests at the dinner were treated to superb musical performances by master bandurist Wolodymyr Mota and vocalists Yuri Konevych and Anna Babka.

“On behalf of UCC National, thank you to everyone who participated in this year’s AGM. Thank you especially to our gracious hosts in Montreal, particularly Rev. Father Kutash, Halyna Holowka and the UCC Montreal team, whose hospitality and hard work made this year’s AGM a success,” stated UCC President Alexandra Chyczij. “I am humbled by the confidence expressed by the Board of Directors in electing me President, and look forward to carrying on the important mission and vision of the UCC. The lively discussions at this year’s AGM will guide the work of the UCC leading into the XXVI Triennial Congress of Ukrainians in Ottawa next year.”