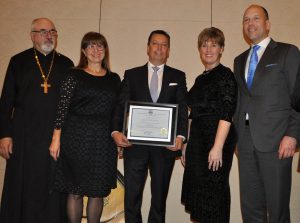 For his outstanding contribution to the development of the Ukrainian community in Québec, in particular, for his voluntary work in Plast-Montréal and as president of the Montréal’s St. Volodymyr Cultural Association, which organizes the Annual Montréal Ukrainian Festival. Under his leadership, the Montréal Ukrainian Festival which promotes Ukrainian Culture in Québec, now has over 20,000 participants, coordinated by over 80 volunteers, contributing over 800 voluntary man-hours of preparation. 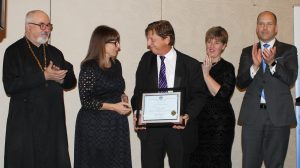 For his outstanding dedication and contribution to the Ukrainian Canadian community, bringing attention to major issues in Montréal and Canada in the defense of Soviet Ukrainian political prisoners (1970-1980’s), thereby exposing human rights abuses in communist-controlled Soviet Ukraine.  For his work on the 1932-1933 Holodomor–Genocide from the early 1970’s and for establishing the Montréal community newspaper “OKO”. 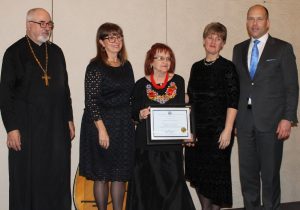 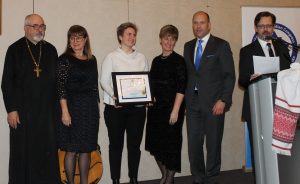 For individual excellence on a national scale in the area of Arts, film and media, particularly for her outstanding, multi-award winning feature documentary film “Recovery Room”, bringing public awareness, nationally and internationally, to Russia’s ongoing war in eastern Ukraine, its far-reaching impact, and to CUF’s work in humanitarian medical mission to Ukraine.  She was also producer, director, editor of her documentary film “Second Chance” and main cinematographer for the award-winning feature documentary “Genocide Revealed”.

For his outstanding contribution in raising awareness of the unjust internment of Ukrainians in Canada 1914-1920 provincially and nationally within the Francophone community.  For his work with Spirit Lake Internment Centre which has attracted 40,000 visitors from Québec and abroad, establishing outreach educational programs with Québec schools, conducting over 150 interviews with mainstream media, and inspiring 4 books in French, and 2 music compositions about internment at Spirit Lake.