Ukraine: Daily Briefing
December 20, 2018, 5 PM Kyiv time
1. Russian Invasion of Ukraine
Ukraine’s Ministry of Defense reported at 12:30 PM Kyiv time that in the last 24 hours, no Ukrainian soldiers were killed or wounded in action. In the last 24 hours, Russian-terrorist forces opened fire on Ukrainian positions on the Luhansk and Donetsk sectors of the front 7 times in total.
2. US Senators Johnson, Durbin, 39 colleagues introduce resolution urging stronger response to Russian aggression in Ukraine 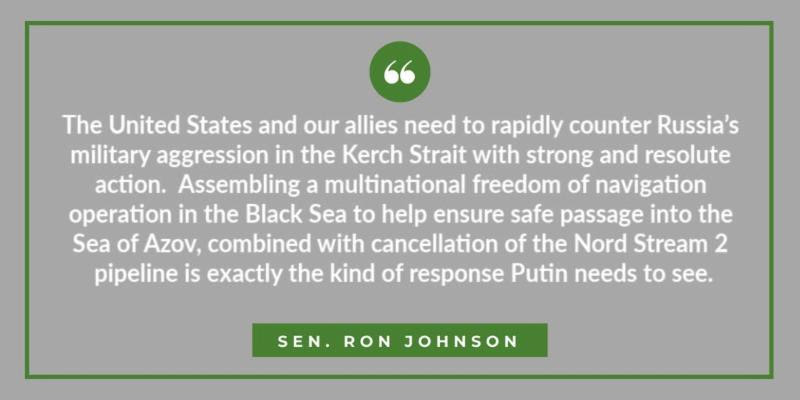 On December 19, US Senators Ron Johnson (R-Wis), Richard Durbin, (D-Ill) and 39 of their colleagues introduced a resolution “calling for a prompt multinational freedom of navigation operation in the Black Sea and the cancellation of the Nord Stream 2 pipeline in response to Russia’s recent aggressive actions in the Kerch Strait and the Sea of Azov.”
Sen. Johnson stated, “The United States and our allies need to rapidly counter Russia’s military aggression in the Kerch Strait with strong and resolute action. Assembling a multinational freedom of navigation operation in the Black Sea to help ensure safe passage into the Sea of Azov, combined with cancellation of the Nord Stream 2 pipeline is exactly the kind of response Putin needs to see.”
Sen. Durbin stated, “The recent provocative military actions from Russia and revelations about its extensive cyber disinformation campaigns in the U.S. are warnings to the rest of the world that Vladimir Putin has no intention of stopping his aggressive campaign against Western democracies or Ukraine. The world must work together to stop this Russian assault on democracy and Ukraine sovereignty. I am proud to support this resolution and urge my colleagues to reaffirm this message of deterring further aggression from the Russian Federation.”
The full text of the Resolution introduced yesterday is available here: Calling for a prompt multinational freedom of navigation operation in the Black Sea and urging the cancellation of the Nord Stream 2 pipeline
3. Ukraine railways increases freight trains by 50% to relieve maritime blockade of Mariupol by Russia
Ukraine Business News reported, “To relieve Russia’s maritime blockade of Mariupol, Ukraine’s main Azov seaport, Ukrzaliznytsia has increased its freight trains by 50%, to 24 trains a day, the state railroad reports. With freight trains running hourly along the 300 km route between Mariupol and Zaporizhia, the steel exports of Mariupol’s main employer, Metinvest, are reaching the Black Sea ports of Kherson and Mykolaiv.
Concorde Capital’s Dmytro Khoroshun writes: ‘The increase of throughput to 24-28 trains per day should allow Metinvest to redirect its entire product volume currently being transported through the Azov Sea to Black Sea ports in case of an escalation of the Azov Sea blockage by Russia.'”
4. US Treasury Department actions on Russia

On December 19, the US Department of the Treasury reported, “Today, the U.S. Department of the Treasury’s Office of Foreign Assets Control (OFAC) took action in response to Russia’s continued disregard for international norms.
Specifically, OFAC designated a former officer of Russia’s Main Intelligence Directorate (GRU) for having acted on behalf of sanctioned oligarch Oleg Deripaska.
OFAC also issued new designations related to the Internet Research Agency (IRA), an entity previously sanctioned for its efforts to interfere in U.S. elections.  Today’s action also includes the designation of 15 members of the GRU, a previously designated Russian military intelligence organization, for their involvement in a wide range of malign activity, including attempting to interfere in the 2016 U.S. election, efforts to undermine international organizations through cyber-enabled means, and an assassination attempt in the United Kingdom.
These 15 operatives are being sanctioned pursuant to the Countering America’s Adversaries Through Sanctions Act (CAATSA).  To date, this Administration has sanctioned 272 Russia-related individuals and entities for a broad range of malign activities.
Treasury Secretary Steve Mnuchin stated, “Treasury is sanctioning Russian intelligence operatives involved in cyber operations to interfere with the 2016 election and a wide range of other malign activities.  We are taking action against operatives working on behalf of a sanctioned oligarch, hacking the World Anti-Doping Agency and other international organizations, and engaging in other subversive actions.”
The full list of sanctions designations taken by the US Treasury is available here
In a separate action on December 19, OFAC “notified Congress of its intention to terminate the sanctions imposed on En+ Group plc (“En+”), UC Rusal plc (“Rusal”), and JSC EuroSibEnergo (“ESE”) in 30 days.  OFAC has determined that the significant restructuring and corporate governance changes will enable them to meet the criteria for delisting.  Russian oligarch Oleg Deripaska will remain sanctioned, and his property will remain blocked.”
Secretary Mnuchin stated, “Treasury sanctioned these companies because of their ownership and control by sanctioned Russian oligarch Oleg Deripaska, not for the conduct of the companies themselves. These companies have committed to significantly diminish Deripaska’s ownership and sever his control.  The companies will be subject to ongoing compliance and will face severe consequences if they fail to comply. OFAC maintains the ability under the terms of the agreement to have unprecedented levels of transparency into operations.”

The Treasury Department’s letter to Congress is available here