Ukraine: Weekly Bulletin
January 5-11, 2019
1. Russian Invasion of Ukraine
Ukraine’s Ministry of Defence reported that during the week of January 4-10, no Ukrainian soldiers were killed and one Ukrainian soldier was wounded in action on the eastern front. Throughout the week, Russian-terrorist forces opened fire 23 times on Ukrainian positions on the Luhansk and Donetsk sectors of the front. Ukraine’s Joint Forces Operation headquarters reported that returning fire, Ukrainian forces killed 3 and wounded 4 enemy combatants in the last week.
2. Decree on Independence handed over to Orthodox Church of Ukraine
Radio Free Europe/Radio Liberty (RFE/RL) reported, “Ecumenical Patriarch Bartholomew of Constantinople has handed over a Tomos of Autocephaly to Metropolitan Epifaniy of the new Orthodox Church in Ukraine.
Bartholomew presented the document at a church service in Istanbul on January 6, after signing it during a ceremony the previous day.
The historic document grants the Orthodox Church in Ukraine independence, or autocephaly, and ends more than 330 years of Russian religious control in Ukraine. […]
‘Unity has been restored,’ Metropolitan Epifaniy said during the ceremony in Istanbul’s St. George’s Cathedral. ‘Now we are united.’
At the January 5 signing ceremony, Bartholomew said that Ukrainians could now enjoy ‘the sacred gift of emancipation, independence, and self-governance, becoming free from every external reliance and intervention.’ […]
Bartholomew announced the decision to recognize Ukraine’s request for an autocephalous church in October.
In December, Ukrainian Orthodox leaders agreed on the creation of a new national Orthodox church and elected the 39-year-old Epifaniy to head that church.”
3. Address by the President of Ukraine on the granting of Tomos of Autocephaly to the Orthodox Church of Ukraine
In Istanbul on January 6, Ukraine’s President Petro Poroshenko stated, “A great historic event, in which the Lord was with us, with Ukrainians, has just finished. And we, Ukrainians, were with the Lord. The Autocephalous Orthodox Church of Ukraine has finally received the Tomos from the Ecumenical Patriarch, from the Mother Church.
The Lord saw and commended the persistent struggle of the Ukrainian people for their independence. He heard our prayers. He gave us proper reparation for our work and facilitated that His All-Holiness Ecumenical Patriarch Bartholomew and the Synod of the Constantinople Mother Church said the long-awaited ‘yes’ to the independent Church of Ukraine.
Today’s event in the history of our country will remain in line with St. Vladimir’s baptism and the proclamation of Ukraine’s independence. The Orthodox world will remember the day when the Church of Ukraine possessing equal rights joined the family of sister churches.
Our country has covered a long path to this day. And no wonder that yesterday His All-Holiness recalled in his speech Olga – our first Christian Princess and Equal of the Apostles Prince Vladimir-Baptist. […]
For over a thousand years, Kyiv’s Christian tradition has been respected and multiplied. Today, our Orthodox Church is ready for independent existence. The Ukrainian people thank God and what has happened is a true miracle, which we owe to the Creator’s will. […]
And the Tomos for us is actually another act of proclaiming Ukraine’s independence. It will complete the assertion of the independence of the Ukrainian state, strengthen religious freedom, interconfessional peace. It will strengthen the rights and freedoms of citizens, especially those who were outside the communion with the Ecumenical Orthodoxy and who were unjustly called non-canonical. […]
For Ukrainians, our own Church is a guarantee of our spiritual freedom. This is the key to social harmony. And as President, I guarantee on behalf of the state that Ukraine will respect the religious choices and freedom of religion of every citizen.
I congratulate all those who care about the rise of the Autocephalous Orthodox Church of Ukraine. And I thank everyone who tirelessly worked on its emergence, created unity and restored justice! Glory to God! Glory to Ukraine!”
4. US Secretary of State: Autocephaly for independent Orthodox Church of Ukraine marks historic achievement

On January 10, US Secretary of State Mike Pompeo stated, “The January 6th announcement of autocephaly for an independent Orthodox Church of Ukraine marks a historic achievement as Ukraine seeks to chart its own future. On this momentous occasion, the United States reiterates its unwavering support for a sovereign, independent Ukraine.
The United States maintains its strong support for religious freedom, including the freedom for members of religious groups to govern their religion according to their beliefs, without external interference. We welcome remarks by Metropolitan Epiphaniy that the Orthodox Church of Ukraine is open to all Orthodox believers and encourage government and Church officials to promote tolerance and respect for the freedom of members of all religious affiliations to worship as they choose.”
5. EU calls for immediate release of all Ukrainian citizens illegally detained by Russia 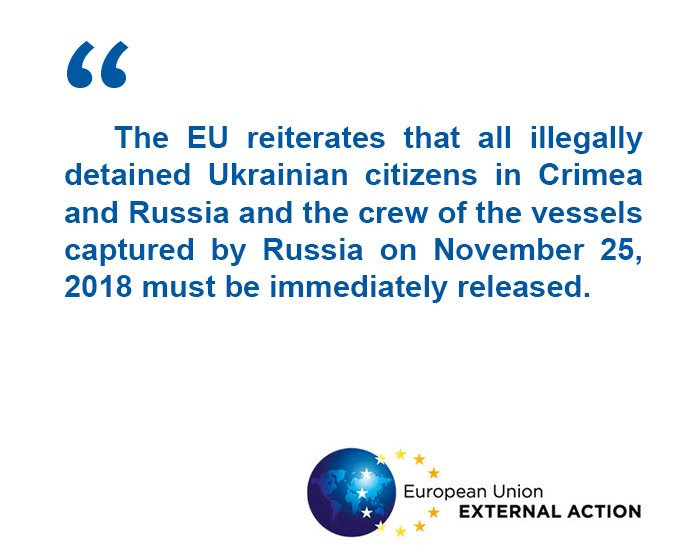 The European Union Foreign Affairs spokesperson stated on January 10, “Pavlo Hryb, a disabled, 20-year old citizen of Ukraine was abducted on 24 August 2017 in Belarus, and detained by the Russian authorities without any clear charges. The European Union expects him to be immediately released and granted access to the special medical treatment he needs. Ukrainian doctors must be allowed to see him while he remains in detention, as required by a recent injunction from the European Court of Human Rights.
Crimean Tatar activist Edem Bekirov was detained on 12 December 2018 upon entry into the Crimean peninsula illegally annexed by Russia. Mr Bekirov also needs daily medical assistance given his health condition. We expect him to be released without delay and granted access to urgent and appropriate medical care.
The European Union reiterates that all illegally detained Ukrainian citizens in the Crimean peninsula and in Russia and the crew of the vessels captured by Russia on 25 November must be immediately released. International human rights observers must be granted full, free and unhindered access to the Crimean peninsula.
The European Union remains committed to fully implementing its policy of non-recognition of the illegal annexation of Crimea and Sevastopol.”
6. IMF publishes Ukraine report following new Stand-By Arrangement adopted in December
Following the agreement on a $3.9 billion, 14 month Stand-By Arrangement approved by the IMF in December 2018, the IM published its Country Report on Ukraine. The report states, “The Ukrainian authorities have been able to restore macro-economic stability and growth following the severe economic crisis of 2014-15.
However, efforts to create a more dynamic, open, and competitive economy have fallen short of expectations, and the economy still faces important challenges. Investment, particularly foreign direct investment, is held back by a difficult business environment, while large numbers of worker seek job opportunities abroad as economic growth is too low for incomes to noticeably close the gap with regional peers. Reserves have recovered, but remain relatively low, while the economy is still vulnerable to shocks.” The full report is available here
7. Ukraine expects to get Canadian sniper rifles this year
Ukrinform reported on January 9, “Ukraine expects to receive the first batch of Canadian sniper rifles this year.
‘We have already received a permit from the Canadian government for the purchase of high-quality sniper rifles with the best range capability in the world. I expect that the first batch of these rifles will be delivered to Ukraine this year,’ Ambassador of Ukraine to Canada Andriy Shevchenko said in an interview with Ukrinform.
He underscored the need ‘to look for different forms of cooperation in the segment of arms with Canada.’ ‘We view it as a joint investment in security and new technologies, which Canada is also interested in. The arms market likes silence, therefore I cannot say more, but it seems to me that we have every chance to see the first practical results of cooperation soon,’ the ambassador noted.
In 2017, Canada included Ukraine in the so-called Automatic Firearms Country Control List, thus lifting an arms embargo on Ukraine.”
8. Democrat lawmakers call for delay in easing sanctions on close ally of Russia’s Putin
The Washington Post reported on January 10, “House Democrats said Treasury Secretary Steven Mnuchin failed to convince them in a closed briefing Thursday that the United States should lift sanctions on a Russian aluminum company controlled by a Vladimir Putin ally, calling for more information and a delay.
Treasury notified Congress last month that it planned to lift sanctions on Rusal, an aluminum company controlled by Russian oligarch Oleg Deripaska.
Treasury said the Russian business leader will remain under personal sanctions but that sanctions on Rusal and two other firms could be lifted because Deripaska had agreed to reduce his ownership in the companies below 50 percent.
‘This, with stiff competition, mind you, was one of the worst classified briefings we’ve received from the Trump administration,’ House Speaker Nancy Pelosi (D-Calif.) said after the briefing. ‘The secretary barely testified. He answered some questions, but he didn’t give testimony.’
Asked whether House Democrats were considering introducing a resolution of disapproval to try to stop Treasury from easing the sanctions, as Democratic leader Charles E. Schumer has done in the Senate,   Pelosi said: ‘We’ll see.’
‘I was somewhat surprised to see the speaker’s comment,’ Mnuchin said after the briefing. ‘ We gave them close to an hour and a half and answered all their questions.’
Rep. Lloyd Doggett (D-Tex.) said he had requested during the briefing for Treasury to delay lifting the sanctions until it can answer further questions about the terms of Deripaska reducing his ownership in the companies.
‘I think there’s a real question about whether he’s effectively divested his stake, and we need more facts about that,’ Doggett said.
In an emailed statement before the briefing, Mnuchin said the sanctions had met their goal. ‘One of the goals of sanctions is to change behavior, and the proposed delistings of companies that Deripaska will no longer control show that sanctions can result in positive change,’ Mnuchin said.”
0 Likes