January 17, 2019. OTTAWA. On January 15, a Russian “court” illegally prolonged the detention of 24 Ukrainian sailors captured during a Russian naval attack on Ukrainian ships in the Black Sea on November 25, 2018. The Ukrainian Canadian Congress (UCC) calls on Canada and the international community to increase pressure on Russia to immediately release the Ukrainian sailors.

The Ukrainian sailors held captive by Russia are Prisoners of War and protected by the Geneva Convention.

“Russia’s continued incarceration of the 24 Ukrainian sailors is a grave violation of international law,” stated Alexandra Chyczij, National President of the UCC. “Canada and the international community must significantly increase sanctions on the Russian regime to secure the release of the Ukrainian sailors and over 70 Ukrainian political prisoners taken hostage and imprisoned by the Kremlin.”

Canada, the United States and the European Union have repeatedly condemned Russia’s illegal detention of the 24 sailors and imprisonment of 70 Ukrainian political prisoners and called for their immediate release. None have taken actions that would increase pressure on Russia to do so. The UCC calls on Canada to: 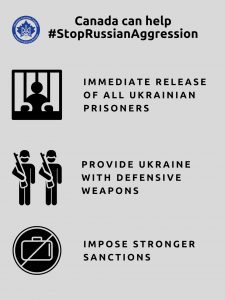 In its December 2017 report, Canada’s Support to Ukraine in Crisis and Armed Conflict, the Standing Committee on National Defence (NDDN) called on the Government of Canada to “expand Canada’s sanctions, including implementing the Justice for Victims of Corrupt Foreign Officials Act (Sergei Magnitsky Law), against those responsible for contributing to the armed conflict in Ukraine, and to work with its allies, including NATO, to maintain and enhance their sanction regimes against Russian operatives.”

In its December 2018 report, Responding to Russian Aggression against Ukraine, Moldova and Georgia in the Black Sea Region, the NDDN Committee called on the Government of Canada to “consider sanctions against Russia in the financial and energy sectors in response to its escalation of hostilities against Ukraine.”