Canada is a target of Russia’s disinformation. Let’s be ready – The Hill Times30 January 2019Next

1. Russian Invasion of Ukraine
Ukraine’s Ministry of Defense reported at 12:30 PM Kyiv time that in the last 24 hours, no Ukrainian soldiers were killed or wounded in action. In the last 24 hours, Russian-terrorist forces opened fire on Ukrainian positions on the Luhansk and Donetsk sectors of the front 8 times in total, including at least 3 times with heavy weapons.
2. Director of US Intelligence presents Worldwide Threat Assessment
Daniel Coats, the US Director of National Intelligence, presented the Worldwide Threat Assessment of the US Intelligence Community on January 29. The report states, “We assess that a major offensive by either Ukraine or Russian proxy forces is operationally feasible but unlikely in 2019, unless one side perceives the other is seriously challenging the status quo.
Bilateral tensions will continue to rise in the Black and Azov Seas as each side asserts its sovereignty and naval capabilities. Russia will continue its military, political, and economic destabilization campaign against Ukraine to try to stymie Kyiv’s efforts to integrate with the EU and strengthen ties to NATO.
Russia’s interception of Ukrainian ships in the Kerch Strait and detention of the ships’ sailors in November 2018 demonstrates Russia’s willingness to limit Ukrainian freedom of navigation in the area and exert political pressure on the country’s leadership, particularly in advance of Ukraine’s elections this year.
The full report is available here
3. G7 Ambassadors to Ukraine identify key reforms they will support in 2019

Ukrinform reported on January 29, “The ambassadors of the Group of Seven (G7) identified the key reforms in Ukraine that they will support during the French Presidency of the G7.
‘The G7 Ambassadors’ Support Group recognizes the reform progress that has been made in Ukraine since 2015, and will continue its efforts to make further progress. It has identified the key reforms it will support in 2019 during the French Presidency of the G7,’ the ambassadors’ group informed on Twitter.
The key reforms, in particular, includes the creation of an anti-corruption court, the reform of the Prosecutor General’s Office, the implementation of the Law On National Security of Ukraine, the modernization of the Security Service of Ukraine, decentralization, and education reform.
As known, the G7 Ambassadors’ Support Group for Ukraine was established as a result of the G7 Summit which took place in June 2015 in Elmau, Germany, to ensure progress in the process of economic reforms in Ukraine by providing coordinated pieces of advice and assistance to the Ukrainian authorities. In 2018, Canada held the G7 Presidency.” 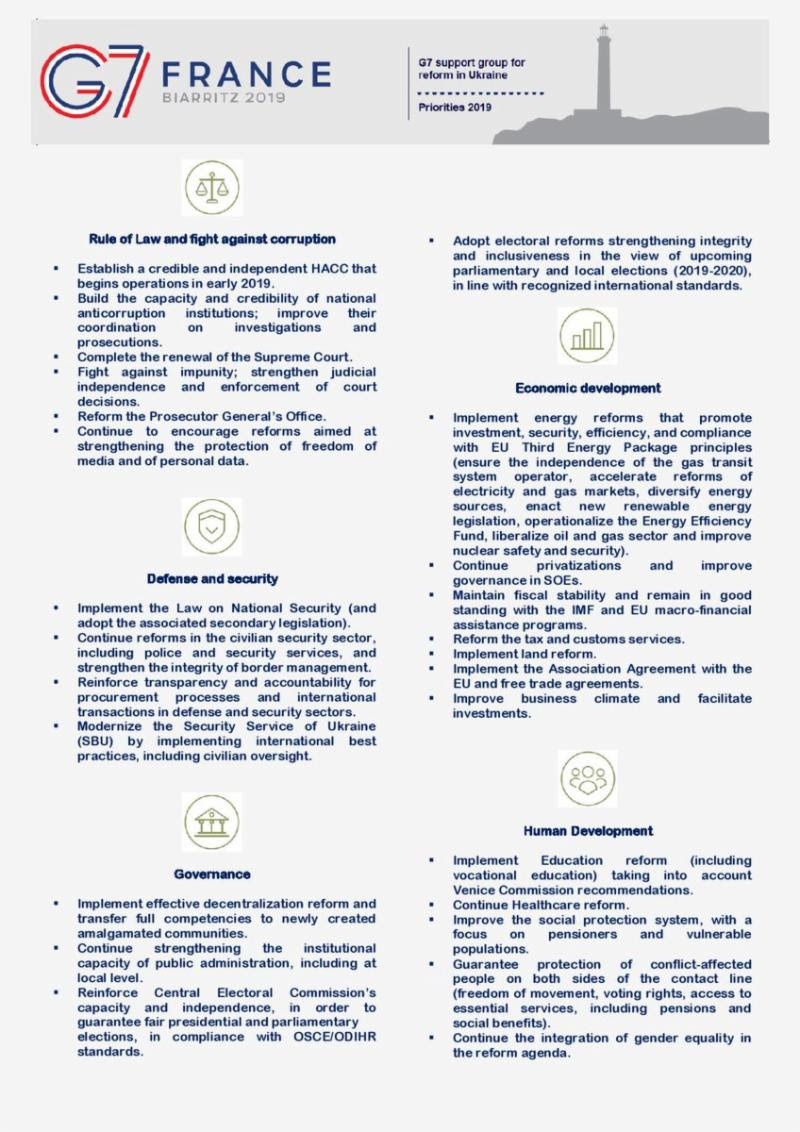 Ukraine’s Cabinet of Ministers reported, “The Cabinet of Ministers of Ukraine at its meeting approved the draft Presidential Decree On Approval of the Annual National Program (ANP) under the auspices of the NATO-Ukraine Commission for 2019. The document was submitted to the President for consideration. The draft was developed by the Ministry of Foreign Affairs of Ukraine in synergy with the Government Office for the Coordination of European and Euro-Atlantic Integration of the Secretariat of the Cabinet of Ministers.
‘We adopt this document for the first time in a completely different form compared to those we approved for many years since the Bucharest Summit in 2008. Finally, it is strategic and systemic. We have improved its structure and content for several years and finally came to a completely new format, which encapsulates our strategic and concrete goals,’ Deputy Prime Minister of Ukraine for European and Euro-Atlantic Integration Ivanna Klympush-Tsintsadze stressed.
During consultations with the Ukrainian side, the leadership of NATO positively assessed the Government’s new vision during the formation of the ANP and highly appreciated the innovative approaches to development of this important strategic document on reforms. […]
The Annual National Program under the auspices of the Ukraine-NATO Commission is the systemic strategic document in the sphere of Euro-Atlantic Integration of Ukraine, providing transition of the security and defence sector to the NATO principals and standards.
The ANP is aimed at achieving compliance with the criteria for NATO membership, strengthening democracy, political, economic, judicial reforms, electoral legislation reforms, education, science, health care, economic growth, fighting corruption, improving the well-being of citizens, reforming the security and defense sector – in accordance with the Alliance’s recommendations.”
5. Democratic Committee leaders respond to Trump Administration’s lifting of sanctions on Russian businesses tied to Oleg Deripaska
On January 29, Ways and Means Committee Chairman Richard Neal (D-MA), House Foreign Affairs Committee Chairman Eliot L. Engel (D-NY), House Permanent Select Committee on Intelligence Chairman Adam Schiff (D-CA), and House Financial Services Committee Chairwoman Maxine Waters (D-CA) released the following statement after the Treasury Department lifted sanctions against companies tied to Russian oligarch Oleg Deripaska on January 27:
“We are deeply troubled by the decision of the Department of the Treasury to move forward with lifting sanctions against En+, Rusal, and EuroSibEnergo (ESE) – businesses tied to sanctioned Russian oligarch and close Putin ally Oleg Deripaska – before Congress had the opportunity to review the terms of this deal thoroughly, and despite a reasonable request for a brief delay.
Mr. Deripaska has a history of involvement with Moscow for malign purposes, and we have serious questions about whether the agreement reached between Treasury and Mr. Deripaska sufficiently divests him of resources for this ability.
As we informed Secretary Mnuchin in a January 8 letter, Treasury’s notification of the lifting of sanctions was delivered to Congress just before an extended recess and a government shutdown. These factors prevented us from completing our review under the 30-day period provided under CAATSA. […]
We are considering additional legislative actions to ensure that Treasury and these companies comply with the agreement in letter and in spirit, and to prevent something like this from happening again in the future. More importantly, we will continue our oversight of Treasury’s decision by examining the terms of this deal and its implementation to safeguard against harmful actors like Mr. Deripaska benefitting from the Treasury’s delisting decisions. We do not believe termination of the sanctions has relieved Treasury of its obligation to explain fully this deal to Members.”
0 Likes