Remembering the Heroes of the Heavenly Hundred19 February 2019
February 11, 2019in News 0 Likes

The Globe and Mail has printed a feature interview with Bill Browder, champion of international human rights sanction legislation known as the Magnitsky Act.  In the interview Mr. Browder outlines his views on the importance of sanctions on individuals engaged in violations of human rights. 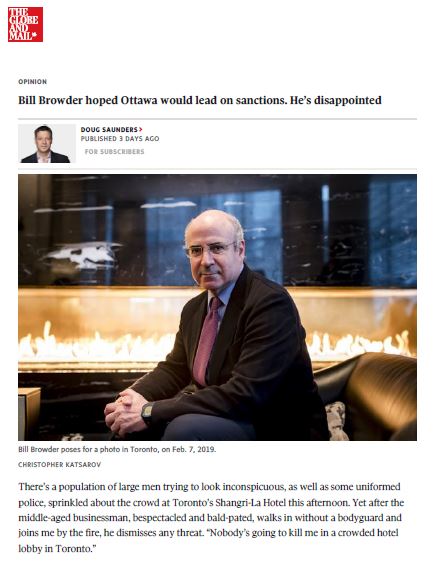 Excerpt from the article

“I would argue that the implementation of the Magnitsky act in Canada has been disappointing,” he says. At first, Canada was impressive. In late 2017, Foreign Minister Chrystia Freeland introduced the Justice for Victims of Corrupt Foreign Officials Act, subtitled the Sergei Magnitsky Law, and it was passed unanimously in the House of Commons. A week later, Ottawa produced its first list of officials to be sanctioned, including those considered responsible for Mr. Magnitsky’s death. Last year, it added seven Myanmar officials responsible for the mass murder of Rohingya people, and then 17 Saudi officials linked to the murder of journalist Jamal Khashoggi (although not Crown Prince Mohammed bin Salman, believed to have ordered the killing).

But those additions have generally followed the lead of the United States – and Canada’s plan to have a staff devoted to identifying and sanctioning international offenders, has not materialized, the $22-million earmarked for this office apparently unspent.

“Every time that we’ve tried to engage with the government it seems that there’s a bit of chaos over there – it’s not even clear what the process is for getting people added to the list,” says Mr. Browder, who is in Toronto to be honoured by the Canadian branch of the International Commission of Jurists (he was introduced onstage by Ms. Freeland, who he has known since 1998, when she was the Financial Times Moscow correspondent). This frustrates him: “Canada, which most people consider to be sort of the moral leader in the world, right now is actually behind the Trump administration, as far as the Magnitsky act goes.”