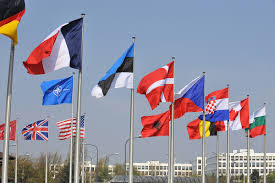 The Guardian Newspaper has published the statement from the group of 11 Foreign Ministers condemning Russia’s illegal occupation of Crimea, which continues to jeopardize international peace.
“Five years ago, Russia gravely challenged the idea of a peaceful and free Europe,” stated the heads of foreign offices of Latvia, Ukraine, Estonia, Lithuania, Poland, Sweden, Denmark, Canada, Romania, Great Britain and Czech Republic. With its aggression against Ukraine and the illegal annexation of Crimea, Russia openly demonstrated its contempt for the principles of international law and presented a serious threat to European security.”
The statement includes the justification for the introduction of sanctions, pointed at grave human rights violations in Crimea by the Russian Federation as well as called on Russia to release the arrested Ukrainian sailors, return the captured vessels and comply with international commitments by ensuring free navigation in the Sea of Azov and the Kerch strait. It also reiterated that providing help and assistance to Ukraine was crucial as Ukraine’s security is linked to the security of the whole of Europe. “The policy of coordinated international sanctions sends a clear message to Russia that disregard for international law has consequences. We will neither forget nor abandon Crimea,” concluded the statement
Read the full statement here
3. On invasion anniversary, Ukraine prelate blasts Russian ‘great lies’
On February 26, marking the fifth anniversary of Russia’s invasion of eastern Ukraine, Ukrainian Archbishop Sviatoslav Shevchuk, major archbishop of Kiev-Halych and head of the Ukrainian Catholic Church, gave interview about Ukraine, Russian invasion, disinformation and other issues at the Vatican, Rome, Italy.
In his speech the leader of the country’s Greek Catholic Church suggested to look differently at Ukraine and try to see it not as a problem but as a solution. He talked about Ukraine making its way “from a post-Soviet society marked by endemic corruption and violence to an “authentic, modern democracy” rooted in “European values.”
“The war in Ukraine is not a Ukrainian war,” highlighted Ukraine’s Greek Catholic leader. “It’s a European war, a war in Europe. Sooner or later, it will knock on your doors … it has global repercussions.”
Archbishop Shevchuk said that does not see this as a war between Ukraine and Russia in terms conventional ethnic war between two different peoples, he believes that it is a war between two different “ways of seeing the future,” between a “return to the Soviet past” and “authentic democracy and resistance to outside despotism.”
Click here to read the full speech text.
4. Ukraine’s Top Diplomat Suggests Allowing Dual Citizenship

Ukrainian Foreign Minister Pavlo Klimkin believes that it is necessary to allow dual citizenship in Ukraine.
“I consider it necessary to allow dual citizenship … Yes, we need it. However, under no circumstances should there be dual citizenship with the aggressor state. This will be discussed only after they return Donbas and Crimea back to us,” said Klimkin. According to the head of the foreign office dual citizenship will help attract foreign specialists to work in Ukraine and help out with reforms referring to Ulana Suprun’s [Ukraine’s acting Minister of Healthcare] case.
5. Ukrainian Parliament Backs Admission of Foreign Military to Ukraine For Drills In 2019
The Verkhovna Rada, Ukraine’s parliament, has passed a draft law to allow foreign armed forces enter the territory of Ukraine in 2019 to take part in multinational drills. The law covers Ukraine-U.S. Rapid Trident 2019 military drills, Ukraine-U.S. Sea Breeze 2019 drills, Ukraine-Romania Riverian 2019 drills, multinational Maple Arch 2019 exercises, and Ukraine-Britain Warrior Watcher 2019 drills.
Interestingly, Ukraine has earmarked UAH 40.22 million [CAD 1.96 million] in Ukrainian Defense Ministry’s 2019 budget for spending on multinational exercises in Ukraine and abroad this year.
0 Likes