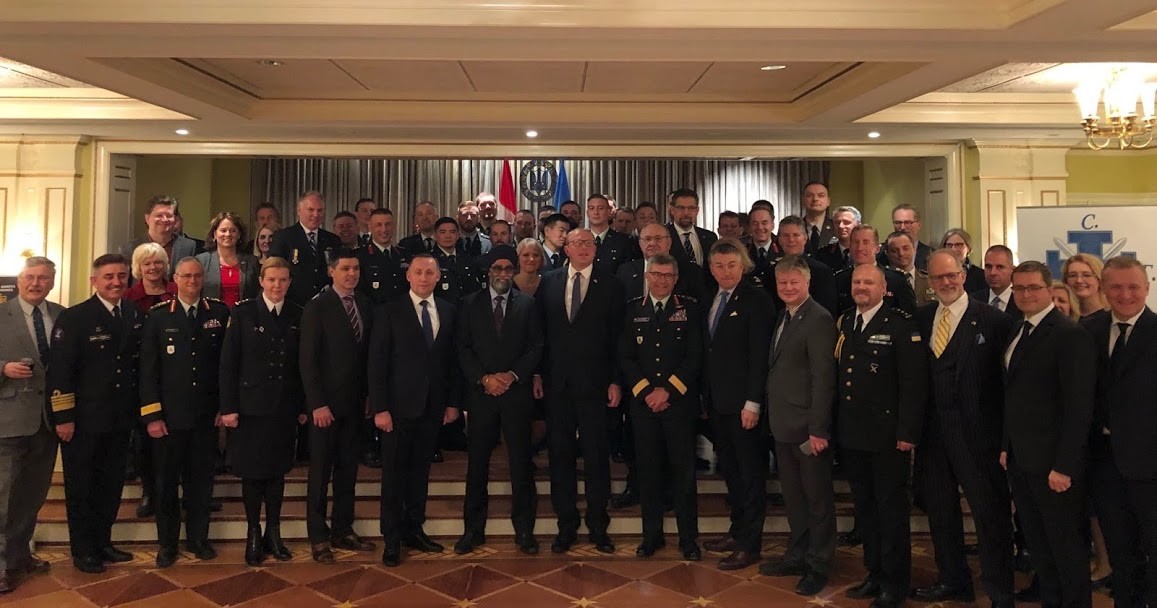 February 28, 2019. Ottawa. The strengthening of Canada-Ukraine defence and security relations were highlighted this week in Ottawa with the visit of Ukraine’s Deputy Minister of Defence, Anatolii Petrenko.  Mr. Petrenko testified before Canada’s Parliamentary Defence Committee and was the keynote speaker at a special event for the Canadian Armed Forces co-hosted by the Embassy of Ukraine in Canada and the Ukrainian War Veterans Association of Canada.

Alex Ilchenko, Vice-President of the Ukrainian Canadian Congress (UCC) represented the UCC at the meeting of the Parliamentary National Defence Committee, together with UCC CEO Ihor Michalchyshyn.

In his remarks to the committee Deputy Minister Petrenko highlighted Russia’s military buildup along the border with Ukraine, the provocative deployment by Russia of ballistic missile complexes within close vicinity to Ukraine and the rapid deterioration of the security situation in the Azov Sea due to Russia’s military escalations.  His presentation can be viewed in English and French by clicking on the images below. 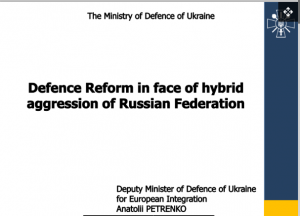 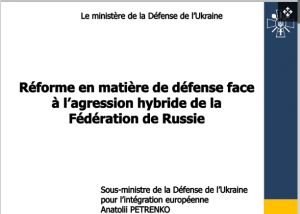 Deputy Minister Petrenko emphasized the strategic implications for not only Ukraine, but all of Europe of the Russian military amassing three divisions along the eastern and northern border of Ukraine as well as in Russian-occupied Crimea. In addition, he noted the consequences of Russia concentrating specialized forces in the Sea of Azov region, which could be used for potential amphibious operations against mainland Ukraine. The threat to Ukrainian oil and gas operations in the Black Sea was also discussed.

Ukraine’s defence capacity has improved dramatically, said Petrenko. He emphasized that defence reforms in Ukraine were irreversible and that Ukraine continued its path toward integration with NATO. Petrenko praised Canada’s support and assistance to Ukraine since Russia’s invasion. He highlighted that that Canadian expertise was vital in building institutional capacity and undertaking reforms in the defence sector.  The audio presentation of his testimony is available online by clicking here.

“The Ukrainian Canadian Congress is pleased to see the strengthening of Canada Ukraine security and defence relationship and the many successes resulting from this close partnership,” said Alex Ilchenko, UCC Vice-President. “The UCC urges the Government of Canada to extend Operation UNIFIER beyond March 31, 2019 and continue to train Ukraine’s military and security personnel, at current or increased levels.”

“As Ukrainian Canadians, we are very proud of the men and women of the Canadian Armed Forces, who are providing invaluable training and expertise to their Ukrainian counterparts. In turn, the CAF is learning valuable lessons about hybrid warfare from the Ukrainian military,” stated Captain (Retd) Andre Sochaniwsky CD, President of the Ukrainian War Veterans Association of Canada. “Since the beginning of Russia’s invasion in 2014, Ukraine’s battle readiness and defence capacity has improved profoundly, which is due in no small part to the contributions of Canada through Operation UNIFIER.”

About Operation UNIFIER
Since 2015 Canada has had approximately 200 CAF personnel deployed in Ukraine as part of Operation UNIFIER. More than 10,000 members of the Ukrainian military have been trained, contributing to the battle-readiness of Ukraine’s Armed Forces as Ukraine defends itself from Russia’s invasion.